In her speech to the Konrad Adenauer Foundation on May 27th, German Chancellor Dr. Angela Merkel, gave an overview of the foreign and security policy agenda of the German EU Council Presidency. This will be influenced by the COVID-19 pandemic and its serious consequences. Nevertheless, challenges that existed before the pandemic have not disappeared, but rather have increased as a result of the health crisis. Following the Chancellor's speech, experts discussed the self-defined goals and priorities of the German EU Council Presidency.
May 28, 2020 Ordering Information 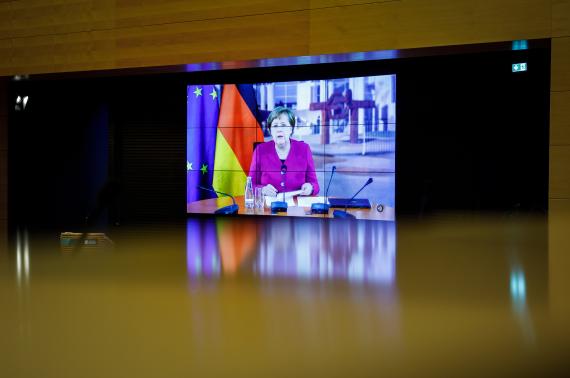 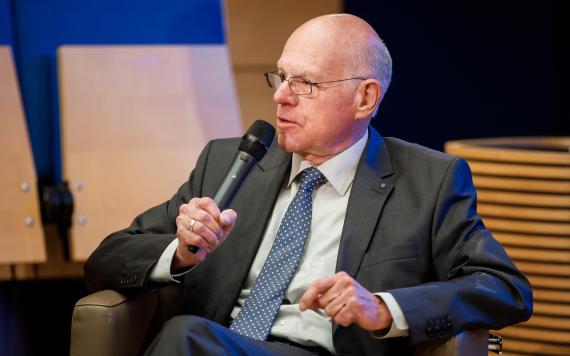 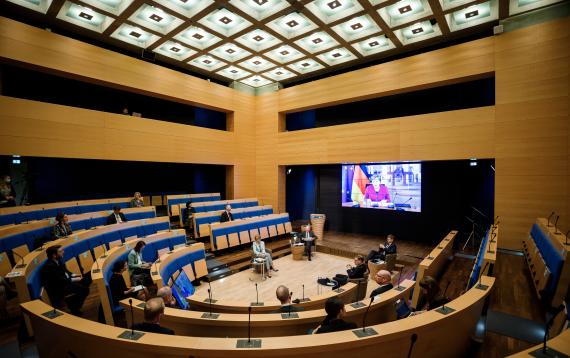 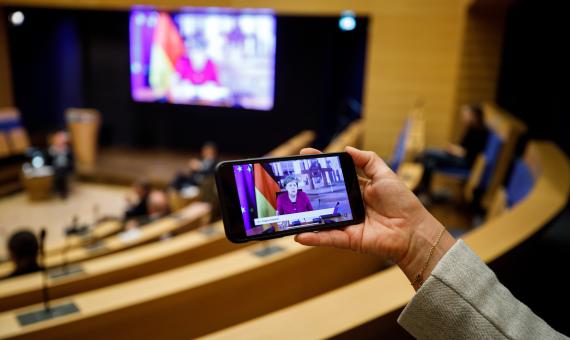 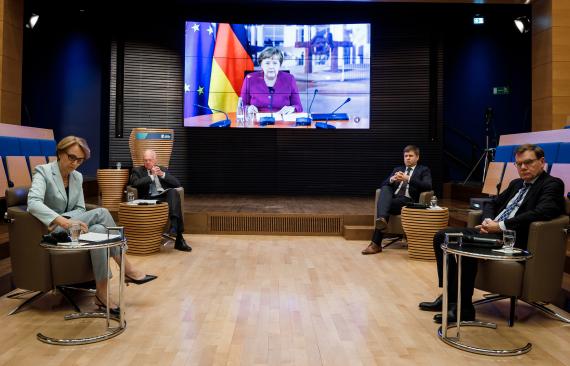 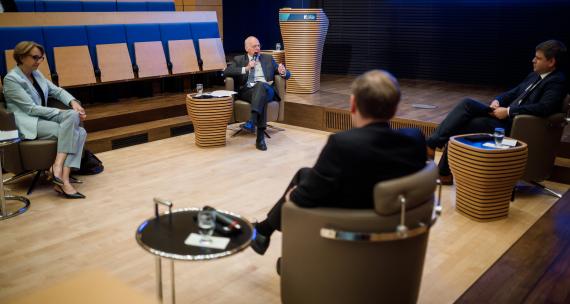 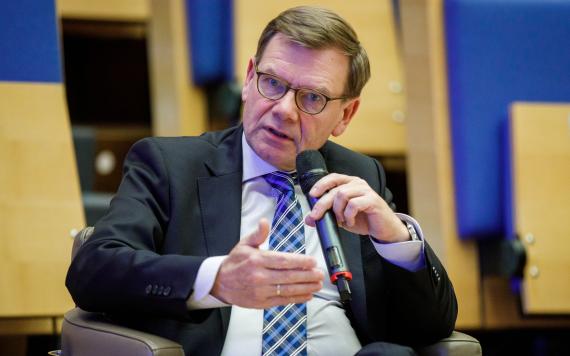 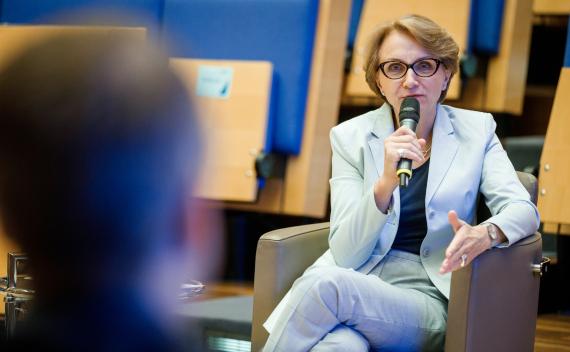 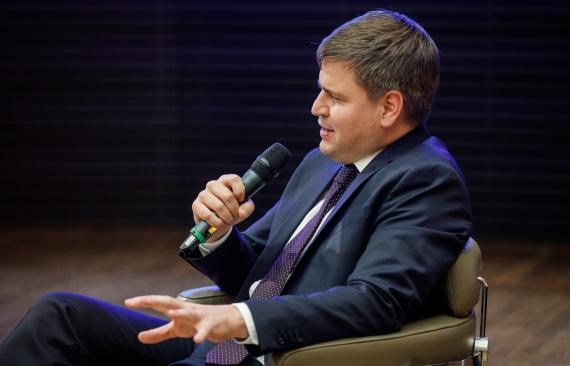 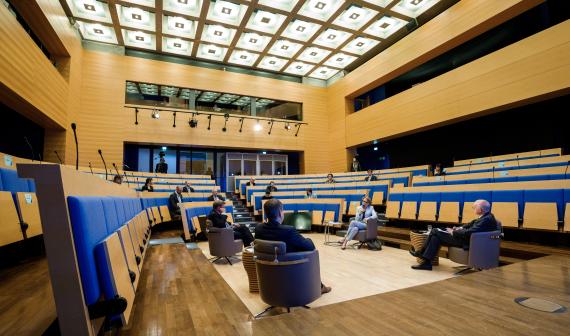 The decsions she has had to make in the face of the corona pandemic have been the most difficult decisons of her chancellorship said the Chancellor at the start of her speech when she drew attention to the enormous challenges and the transformative power of the serious health crisis. The virus was a democratic imposition and the pandemic had changed many things from the bottom up, including the plans for the EU Council Presidency. Europe must move closer together in the crisis and show solidarity, she said, as this is the only way to emerge more strongly from the pandemic. While in the initial phase the main focus was on providing support in the form of medical protective equipment or patient care, the focus must now be on cushioning the economic consequences. Here the Chancellor particularly emphasized the Franco-German initiative for Europe's economic recovery and, among other things, the international donor conference organized by the EU Commission, at which around eight billion euros were collected for the development of a vaccine, among other things. Nevertheless, the Chancellor wished the EU to act as a responsible force not only internally but also externally. The pandemic would lead to an intensification of many global trouble spots and become a stress test for European foreign and security policy. Here the EU could act as an anchor of stability, assume its global responsibility and proactively support rule-based, multilateral cooperation.

The EU and global actors

An important focus of the European Council Presidency will be the relationship between the EU and China. The Chancellor underlined that the People's Republic was one of the most important players in global politics and was increasingly determined to claim a leading position in the global architecture. With regard to relations with China, for example, the conclusion of the investment agreement was on the agenda, but also joint progress in the areas of climate and environmental protection, global health and the respective relationships with Africa. However, the People's Republic was also a partner with whom fundamental differences existed when it came to human rights and liberal principles. However, this was not a reason against cooperation, but instead called for open, critical and constructive dialogue.

Relations with Africa were another focus of the Council Presidency, said the Chancellor. The EU-Africa Summit in October will also be concerned with cushioning the effects of the Covid-19 pandemic, which could be serious in many parts of Africa. In addition, she said it was also important to learn from Africa and to address issues such as climate, migration, sustainable development as well as peace and security.

Europe needed partners and allies to master the immense challenges. The most important partner would continue to be the United States, even if cooperation in many areas of international cooperation – like trade, climate and the fight against the pandemic - was currently proving difficult. Nonetheless, the USA and NATO remained an important pillar for European security. The Chancellor underlined that Europe was not neutral, but was part of the political West and has always been standing up for these values in the world.

Angela Merkel stressed that she had been committed to peaceful dialogue with Russia since the beginning of her chancellorship. However, she said that Moscow had repeatedly turned away from this dialogue, among other things by annexing Crimea in violation of international law or through hybrid attacks on Western democracies, including Germany. During the Council Presidency, however, Germany would also try to give new impetus to the relationship between the EU and Russia and to continue a critical and constructive dialogue.

In conclusion, the Chancellor recalled Adenauer's words. ”European unity was a dream of a few people. It became a hope for many. Today it is a necessity for all of us.” The EU must strengthen itself internally to be able to act externally.

The subsequent discussion, chaired by the Chairman of the KAS Foundation, Prof. Dr. Lammert, initially focused on the EU's security policy. French Ambassador Anne-Marie Descôtes emphasized that there have been important progress and initiatives in recent years, such as the establishment of PESCO or the European Defence Fund. She welcomed the fact that Germany also wanted to make security and defence policy issues a priority of the Council Presidency. In recent years there has been a realisation that it was important to proceed pragmatically in these areas.

The Deputy Chairman of the CDU/CSU parliamentary group, Dr. Johann Wadephul MoP, explained that the EU Member States had initially reacted to the pandemic at national level in particular - this had led to border closures, some of which were inappropriate. After this initial irritation, however, a clear process of learning had begun, said the defence politician. He agreed with the French ambassador that it was important to take pragmatic steps forward. In addition to the current pandemic, he said, there were numerous threats that required Europe to be capable of global politics.

Asked by former President of the German Bundestag, Prof. Dr. Norbert Lammert, to what extent the relationship between the EU and China had changed in the wake of the COVID-19 pandemic, the Director of the MERICS Institute, Dr. Mikko Huotari, replied that EU confidence in China had further declined. However, the current crisis underlines the importance of the People's Republic. A certain paradigm shift with regard to China and a loss of naivety had already started to establish in Europe before the crisis. From Beijing's point of view, it was also in Beijing's interest to discredit the relationship between the EU and the USA.

Finding a common position on China within the framework of the EU was very important, the French ambassador also emphasised this, because only together was it possible to meet Beijing on an equal footing. French President Macron had invited other European representatives and the German Chancellor when Xi Jinping visited Paris. China's attempts to divide the EU must be met with determination.

The defence politician Johann Wadephul also stressed that formats such as 17+1 were a major obstacle to a unified position towards China. He said that the EU did not want to be confrontational with Beijing - in contrast to the US, he said, it was trying to conduct the dialogue differently - but the basic condition was to stand as one in Europe.

Opportunities and challenges of the neighbouring continent of Africa

The French ambassador said she was pleased to see that Germany also wanted to focus more on the African continent during its EU Presidency. She pointed out that the Sahel region was bringing with it enormous challenges which Europe could only meet together.

The KAS chairman asked critically whether Germany's engagement in the Sahel region was not rather symbolic and whether Germany could not do more militarily to relieve its partners on the ground. Member of the Bundestag Wadephul underlined that the upcoming extension of the Bundeswehr mandate includes a better distribution of roles. In this context, he said that it was important to understand that Africa, as a neighbouring continent of Europe, in addition to the major multidimensional challenges, offers important opportunities. China had recognized this long ago.

With regard to the Western Balkans, the Ambassador said that this region clearly belongs to Europe. However, given the current state of the European Union, it was questionable whether the door could be opened to new members. The debate on the future of Europe, which will start in the summer, must address these important questions. The parliamentary group vice-president underlined the importance of opening the accession perspective for the countries of the Western Balkans.

At the end of the discussion, the questions of nuclear sharing and a possible cooperation with France were in the focus. Member of Parliament Johann Wadephul explained that the discussion on nuclear sharing was very difficult, but that the concept of nuclear deterrence as a form of war prevention was relevant. However, since Germany has decided in principle against its own nuclear weapons, the only remaining option is to look at the partners with whom one could cooperate on this issue - it is therefore obvious to proceed together with France.

The experts agreed that the EU must emerge from the Corona crisis in a stronger position that it was in when it got into it, and the Chancellor also made this the leitmotif of her speech. Thus the joint management of the crisis is at the heart of the German EU Presidency. The other priorities set by the Chancellor - the EU's relations with China, Africa and Russia; the fight against climate change and Brexit - these challenges could of course not all be solved in one Council Presidency, but they have to be and will be tackled together. 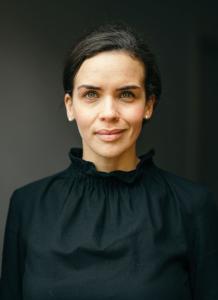 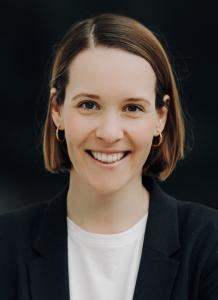