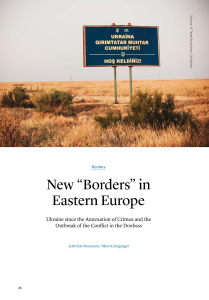 The principle of border inviolability within Europe was put into question in 2014 with the Russian annexation of Crimea and the breakout of the conflict in Eastern Ukraine. These events created two new “borders” in Eastern Europe: one de-facto national border in the case of Crimea and a frozen frontline in the case of the occupied territories in the Donbass. Both came into being in contravention of international law and are negatively impacting people in Ukraine. 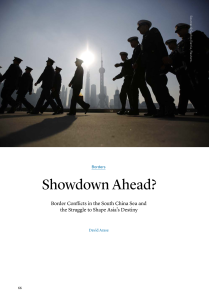 The struggle over the South China Sea is a matter of international peace and prosperity. China claims sovereignty over some 90 per cent of the South China Sea with the nine-dash line and is therefore a threat to peace and free trade in the region. This article sheds light on how recent developments such as the ruling by the Permanent Court of Arbitration and the presidency of Donald Trump might impact the status quo. 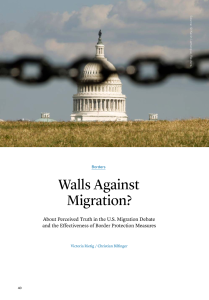 About Perceived Truth in the U.S. Migration Debate and the Effectiveness of Border Protection Measures

Donald Trump’s plan to build a wall along the U.S.-Mexico border shines a spotlight on the issue of border protection. This article investigates how effectively walls and border control measures reduce unwanted migration flows, compared to efforts to fight root causes, and analyses as to why new migration trends in the United States and Mexico are being neglected in the U.S. debate. 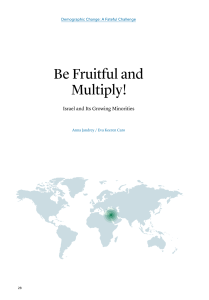 Be Fruitful and Multiply!

Israel and Its Growing Minorities

Since Israel was founded in 1948, it has defined itself simultaneously as both a Jewish and a democratic state. It is home to secular as well as ultra-Orthodox Jews, Muslims, Christians and Druze. However, due to diverging growth rates in the different populations, domestic and religious tensions have been developing which could undermine the secular and Zionist founding ethos of the Jewish State. 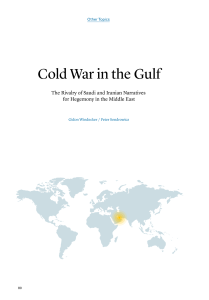 Cold War in the Gulf

The rivalry between Saudi Arabia and Iran is much more than just a sectarian conflict: Two regional powers compete over the hegemony in the Middle East. In this struggle for dominance, both use a sophisticated arsenal of rhetorical means to construct sectarian narratives which back their real-political intents. 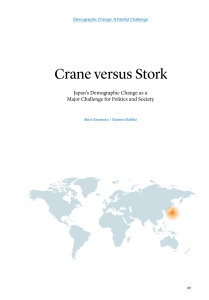 Like no other industrialised nation Japan is confronted with the challenges of a rapidly ageing and shrinking population. Today, more than a quarter of the Japanese population is already over age 65. Along with a stagnating economy that is even failing to gain momentum through the acclaimed Abenomics, Japan’s demographic change is the biggest problem for the island nation. What measures is the government adopting to halt the demographic crisis? Is it perhaps already too late for counter measures? 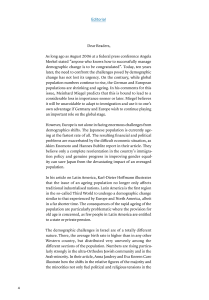 As long ago as August 2006 at a federal press conference Angela Merkel stated “anyone who knows how to successfully manage demographic change is to be congratulated”. Today, ten years later, the need to confront the challenges posed by demographic change has not lost its urgency. 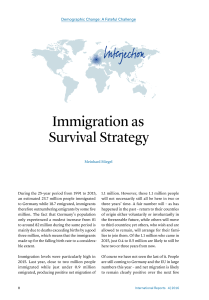 During the 25-year period from 1991 to 2015, an estimated 23.7 million people immigrated to Germany while 18.7 emigrated, immigrants therefore outnumbering emigrants by some five million. The fact that Germany’s population only experienced a modest increase from 81 to around 82 million during the same period is mainly due to deaths exceeding births by a good three million, which means that the immigrants made up for the falling birth rate to a considerable extent. 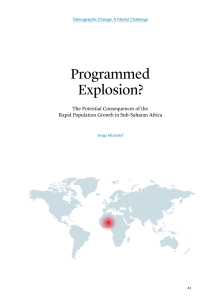 The African sub-Saharan countries are demographically a special case. In the course of the 20ᵗʰ century population has admittedly also grown in other areas of the world, but this process did not take place anywhere near as rapidly as in these states. If the population boom of the 20ᵗʰ century should be followed by a second one in the 21ˢᵗ century, its impacts would not stay limited to the African continent alone. 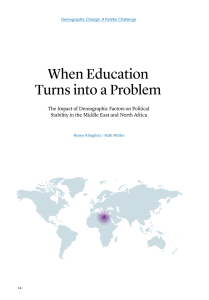 When Education Turns into a Problem

The area comprising the Middle East and North Africa is among the most crisis-ridden regions in the world. One of the key issues is that the increasingly better-educated population of working age individuals has been growing faster than the number of jobs for some time now. If the affected states do not succeed in significantly reducing this discrepancy, political instability and therefore the number of refugees and migrants from the region will continue to increase, which will also have unforeseen repercussions for Europe.