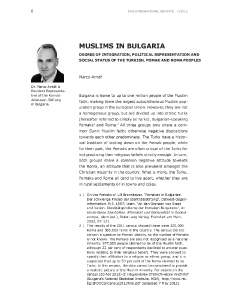 Degree of Integration, Political Representation and Social Status of the Turkish, Pomak and Roma Peoples

The Muslim community in Bulgaria formed during the 500 years of the Ottoman Empire and included Turkish migrants, Muslim migrants from neighbouring and distant provinces of the Empire and locals who converted to Islam under Ottoman rule. This development generally led to Islam co-existing peacefully alongside other cultures in the Balkans, something that today continues to distinguish it from the Salafist form of Islam found in Arab lands. 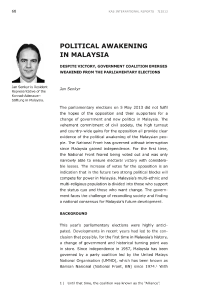 Despite Victory, Government Coalition Emerges Weakened from the Parliamentary Elections

The parliamentary elections on 5 May 2013 did not fulfil the hopes of the opposition and their supporters for a change of government and new politics in Malaysia. The vehement commitment of civil society, the high turnout and country-wide gains for the opposition all provide clear evidence of the political awakening of the Malaysian people. The National Front has governed without interruption since Malaysia gained independence. For the first time, the National Front feared being voted out and was only narrowly able to ensure electoral victory with considerable losses. 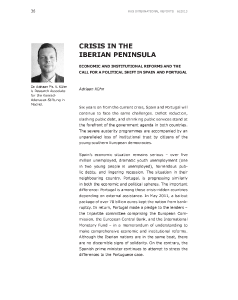 Crisis in the Iberian Peninsula

Six years on from the current crisis, Spain and Portugal will continue to face the same challenges. Deficit reduction, slashing public debt, and shrinking public services stand at the forefront of the government agenda in both countries. The severe austerity programmes are accompanied by an unparalleled loss of institutional trust by citizens of the young southern European democracies. 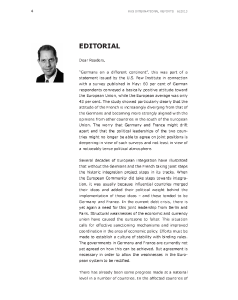 The worry that the political leaderships of Germany and France might no longer be able to agree on joint positions is deepening. Still, several decades of European integration have illustrated that without the Germans and the French taking joint steps the historic integration project stops in its tracks. When the European Community did take steps towards integra¬tion, it was usually because influential countries merged their ideas and added their political weight behind the implementation of those ideas – and these tended to be Germany and France. 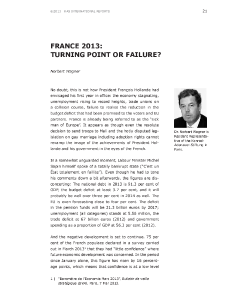 Never before in the Fifth Republic has a newly elected president crashed in the surveys as badly as François Hol¬lande in the first few months of his term. Of course it is mainly the sympathisers of the centre-right parties who have “no confidence” in Hollande (92 per cent). But there is also a disappointed number amongst the supporters of the left (39 per cent). There seems to be a sentiment among the people that the negative developments in France did not arise by sheer coincidence, but that Hollande and his government are using the wrong approach to combat the crisis. 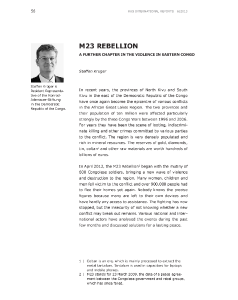 A Further Chapter in the Violence in Eastern Congo

For years, the provinces of North Kivu and South Kivu in the east of the Democratic Republic of the Congo have been the scene of looting, indiscriminate killing and other crimes. In April 2012, the M23 Rebellion began with the mutiny of 600 Congolese soldiers, bringing a new wave of violence and destruction to the region. Many women, children and men fell victim to the conflict and over 900,000 people had to flee their homes yet again. The fighting has now stopped, but the insecurity of not knowing whether a new conflict may break out remains. 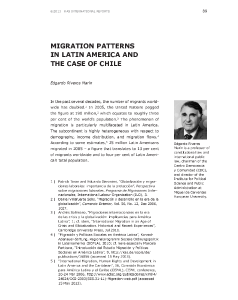 Migration Patterns in Latin America and the Case of Chile

The phenomenon of migration is particularly multifaceted in Latin America. The subcontinent is highly heterogeneous with respect to demography, income distribution, and migration flows. According to some estimates, 25 million Latin Americans migrated in 2005. Chile is currently experiencing a phase of immigration that began in the 1990s after democratic rule had been restored. This phase has been characterised by an increase in immigration from Peru. 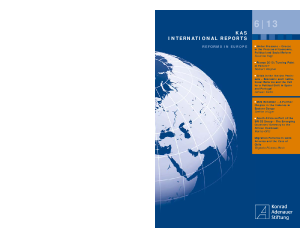 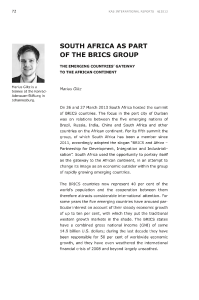 South Africa as part of the BRICS group

The emerging countries’ gateway to the African continent 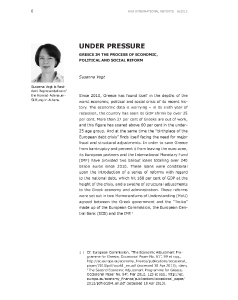 Greece in the Process of Economic, Political and Social Reform

Greece has found itself in the depths of the worst economic, political and social crisis of its recent his¬tory. The economic data is worrying – in its sixth year of recession, the country has seen its GDP shrink by over 25 per cent. More than 27 per cent of Greeks are out of work, and this figure has soared above 60 per cent in the under- 25 age group. And at the same time the “birthplace of the European debt crisis” finds itself facing the need for major fiscal and structural adjustments.