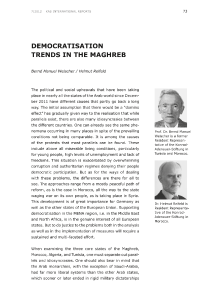 Democratisation Trends in the Maghreb

The political and social upheavals that have been taking place in nearly all the states of the Arab world since December 2011 have different causes that partly go back a long way. The initial assumption that there would be a “domino effect” has gradually given way to the realisation that while parallels exist, there are also many idiosyncrasies between the different countries. 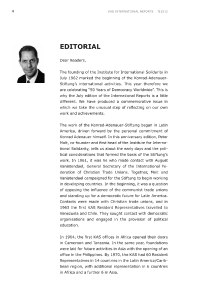 We will be celebrating "50 Years of Democracy Worldwide" in July this year. This is why the July edition of the International Reports is a littledifferent. We have produced a commemorative issue in which we take the unusual step of reflecting on our own work and achievements. Today we have more than 80 offices around the globe. We work tirelessly to make a lasting contribution to peace, freedom and democracy – a contribution that is always based on creating a partnership of equals. 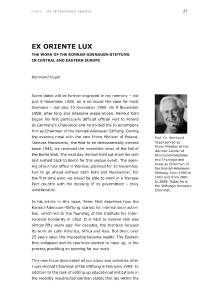 When the Eastern Bloc collapsed in the 1989, its countries started to open up, providing an opening for our work. The main focus of our activities was the creation of KAS offices in former communist spheres of influence. The launching point for the expansion of our office network in Central and Eastern Europe was our existing office in Vienna. Today we have over 18 offices in these countries of which 15 are full KAS offices and three are liaison offices. 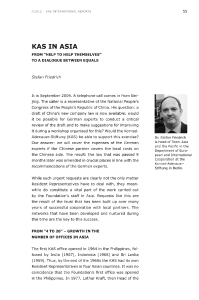 From “Help to Help Themselves” to a Dialogue between Equals

September 2004. A telephone call comes in from Beijing. The caller is a representative of the National People’s Congress of the People’s Republic of China. His question: a draft of China’s new company law is now available. Would it be possible for German experts to conduct a critical review of the draft and to make suggestions for improving it during a workshop organized for this? Would the KAS be able to support this exercise? Requests like this are the result of the trust that has been built over many years of successful cooperation with local partners. 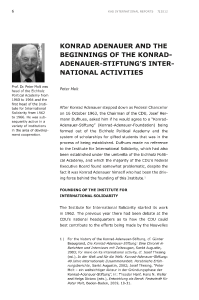 The Institute for International Solidarity started its work in 1962. With an eye on Latin America, Konrad Adenauer opened up three new windows of opportunity as a means of making a German contribution to the global challenge: encouraging church social work via the church relief organisations; supporting value-based democratic reformists via the political foundations; and improving the effectiveness of foreign relations by institutionalising an independent development policy. 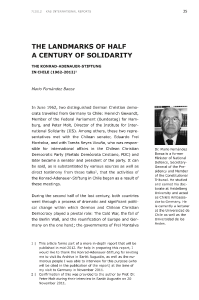 The Landmarks of Half a Century of Solidarity

Germany and Chile are shining examples of democracy and socio-economic development on their respective continents. Behind these achievements are the people and the parties, the Christian Democratic parties, and the cooperation between the Konrad-Adenauer-Stiftung and its Chilean counterparts. The Konrad-Adenauer-Stiftung promoted visits and seminars and did everything it could to strengthen relations between Germany and Chile. 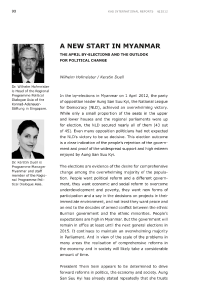 A New Start in Myanmar

The April By-Elections and the Outlook for Political Change

In the by-elections in Myanmar on 1 April 2012, the party of opposition leader Aung San Suu Kyi achieved an overwhelming victory. Even many opposition politicians had not expected the NLD’s victory to be so decisive. This election outcome is a clear indication of the people’s rejection of the government and proof of the widespread support and high esteem enjoyed by Aung San Suu Kyi. 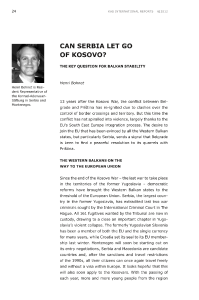 Can Serbia Let Go of Kosovo?

The Key Question for Balkan Stability

13 years after the Kosovo War, the conflict between Belgrade and Priština has re-ignited due to clashes over the control of border crossings and territory. But this time the conflict has not spiralled into violence, largely thanks to the EU’s South East Europe integration process. The desire to join the EU that has been evinced by all the Western Balkan states, but particularly Serbia, sends a signal that Belgrade is keen to find a peaceful resolution to its quarrels with Priština. 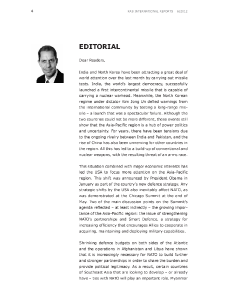 The Asia-Pacific region is a hub of power politics and uncertainty. For years, there have been tensions due to the ongoing rivalry between India and Pakistan, and the rise of China has also been unnerving for other countries in the region. All this has led to a build-up of conventional and nuclear weapons, with the resulting threat of an arms race. 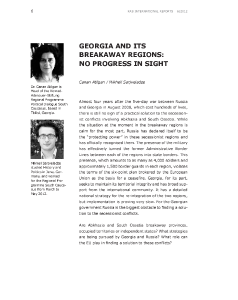 Georgia and its Breakaway Regions: No Progress in Sight