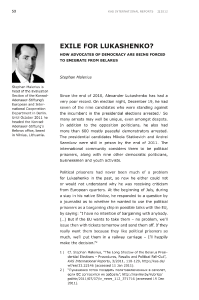 How Advocates of Democracy are being Forced to Emigrate from Belarus

In the last 17 years of Lukashenko’s presidency, people have left Belarus to go into exile for many different reasons. Many have left their homeland to study or set up a business, or simply because they feared for their lives. Many of the President’s former allies who have fallen out of favour now live in Moscow. Lukashenko’s democratic opponents have chosen Prague, Warsaw or Vilnius as places to live in exile. 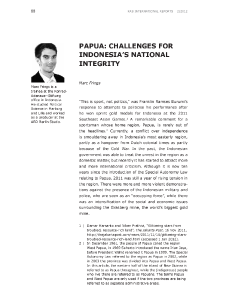 Currently, a conflict over independence is smouldering away in Indonesia’s most easterly region, partly as a hangover from Dutch colonial times as partly because of the Cold War. In the past, the Indonesian government was able to treat the unrest in the region as a domestic matter, but recently it has started to attract more and more international criticism. Although it is now ten years since the introduction of the Special Autonomy Law relating to Papua, 2011 was still a year of rising tension in the region. 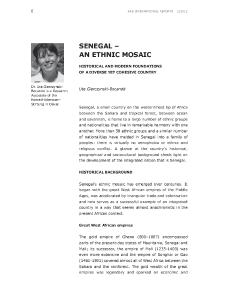 Historical and Modern Foundations of a Diverse yet Cohesive Country

More than 50 ethnic groups and a similar number of nationalities have melded in Senegal into a family of peoples: there is virtually no xenophobia or ethnic and religious conflict. A glance at the country’s historical, geographical and sociocultural background sheds light on the development of the integrated nation that is Senegal. 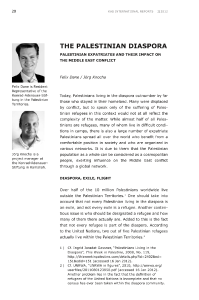 Palestinian Expatriates and their Impact on the Middle East Conflict

While almost half of all Palestinians are refugees, many of whom live in unfit conditions, there is also a large number of expatriate Palestinians spread all over the world who have a secure position in society and who are networked in various ways. It is due to them that the Palestinian population as a whole can be considered a cosmopolitan people. And they exert influence on the Middle East conflict through a global network. 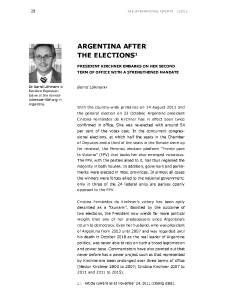 Argentina after the elections

With the the general election in October 2011, Argentine president Cristina Fernández de Kirchner has been confirmed in office. In the concurrent congressional elections, at which half the seats in the Chamber of Deputies and a third of the seats in the Senate were up for renewal, the Peronist election platform “Frente para la Victoria” (FPV) that backs her also emerged victorious. As the 2011 elections clearly showed, Peronism remains by far the most important political force in Argentina. 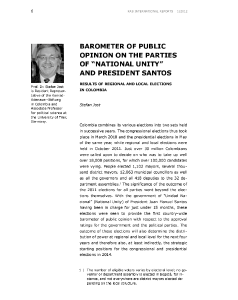 Results of Regional and Local Elections in Colombia

Colombia’s congressional elections took place in March 2010 and the presidential elections in May of the same year, while regional and local elections were held in October 2011. Just over 30 million Colombians were called upon to decide on who was to take up well over 18,000 positions, for which over 100,000 candidates were vying. The significance of the outcome of the 2011 elections for all parties went beyond the elections themselves. 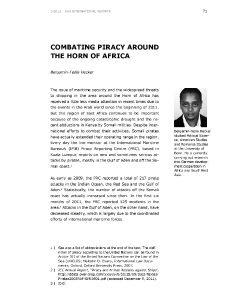 Combating Piracy around the Horn of Africa

The issue of maritime security and the widespread threats to shipping in the area around the Horn of Africa has received a little less media attention in recent times due to the events in the Arab world since the beginning of 2011. But this region of East Africa continues to be important because of the ongoing catastrophic drought and the recent abductions in Kenya by Somali militias. Despite international efforts to combat their activities, Somali pirates have actually extended their operating range in the region. 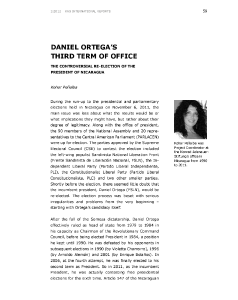 The Controversial Re-Election of the President of Nicaragua

During the run-up to the presidential and parliamentary elections held in Nicaragua on November 6, 2011, the main issue was less about what the results would be or what implications they might have, but rather about their degree of legitimacy. The election process was beset with serious irregularities and problems from the very beginning – starting with Ortega’s unconstitutional candidacy itself. In view of these election results and the way the elections were run, it is now more likely than ever that Nicaragua will have to face yet more setbacks on its path to democracy. 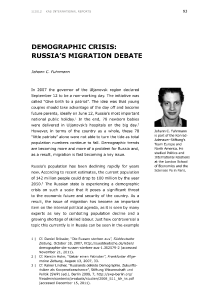 Russia’s population has been declining rapidly for years. The Russian state is experiencing a demographic crisis on such a scale that it poses a significant threat to the economic future and security of the country. As a result, the issue of migration has become an important item on the internal political agenda. 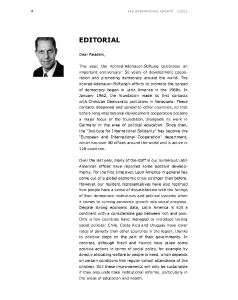 This year, the Konrad-Adenauer-Stiftung celebrates an important anniversary: 50 years of development cooperation and promoting democracy around the world. Our efforts to promote the spread of democracy began in Latin America in the 1960s. We will continue to work there at all levels to promote civic engagement and good governance.