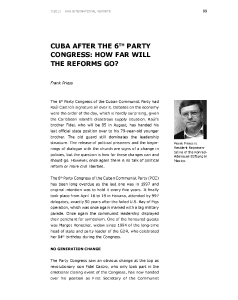 Cuba after the 6th Party Congress: How Far Will the Reforms go?

The 6th Party Congress of the Cuban Communist Party had Raúl Castro’s signature all over it. Debates on the economy were the order of the day, which is hardly surprising, given the disastrous supply situation. Raúl’s brother Fidel, who will be 85 in August, has handed his last official state position over to his 79-year-old younger brother. The old guard still dominates the leadership structure. There are signs of a change in policies, but once again there is no talk of political reform or more civil liberties. Frank Priess 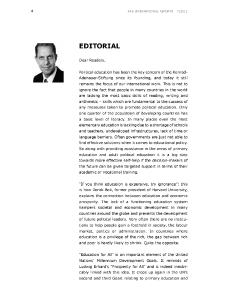 Political education has been the key concern of the Konrad-Adenauer-Stiftung since its founding, and today it still remains the focus of our international work. Often governments are just not able to find effective solutions when it comes to educational policy. So along with providing assistance in the areas of primary education and adult political education it is a big step towards more effective self-help if the decision-makers of the future can be given targeted support in terms of their academic or vocational training. 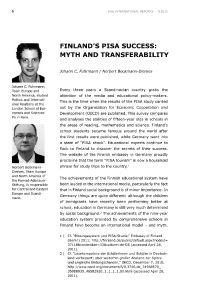 Finland’s school students became famous around the world after the first results were published, while Germany went into a state of “PISA shock”. But media and political analysts often fail to see beyond the fact that Finland has a comprehensive school system and rarely look at the comparability of the German and Finnish school systems. The supporters of comprehensive schools tend to either play down or totally deny the problems of transferability. 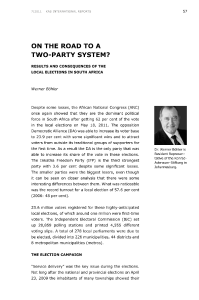 On the Road to a Two-Party System?

Results and Consequences of Local Elections In South Africa

Despite some losses, the African National Congress (ANC) once again showed that they are the dominant political force in South Africa after getting 62 percent of the vote in the local elections on May 18, 2011. The opposition Democratic Alliance (DA) was able to increase its voter base to 23.9 percent “Service delivery“ was the key issue during the elections. People’s patience over unfulfilled promises has started to wear thin 17 years after the reintroduction of democracy to the country. 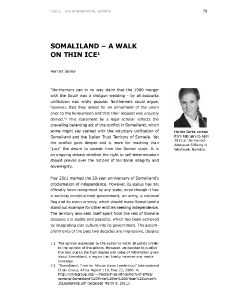 Somaliland – A Walk on Thin Ice

May 2011 marked the 20-year anniversary of Somaliland’s proclamation of independence. However, its status has not officially been recognised by any state, even though it has a working constitutional government, an army, a national flag and its own currency, which should make Somaliland a stand out example for other entities seeking independence. The territory also sets itself apart from the rest of Somalia because it is stable and peaceful. 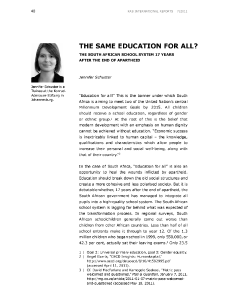 The Same Education for All?

17 years after the end of apartheid, the South African school system is lagging far behind what was expected of the transformation process. In regional surveys, South African schoolchildren generally come out worse than children from other African countries. Although the present government is pouring large amounts of money into rectifying this imbalance, the legacy of apartheid in the education system remains strong. Jennifer Schuster 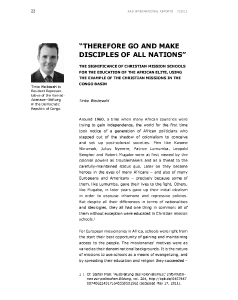 “Therefore Go and Make Disciples of all Nations”

Around 1960, a time when many African countries were trying to gain independence, the world for the first time took notice of a generation of African politicians who stepped out of the shadow of colonialism to conceive and set up post-colonial societies. Men like Kwame Nkrumah, Julius Nyerere, Patrice Lumumba, Leopold Senghor and Robert Mugabe, despite all their differences in terms of nationalities and ideologies, had one thing in common: all of them were educated in Christian mission schools. 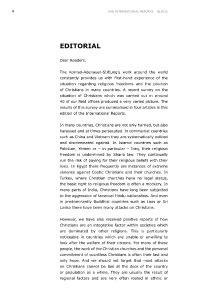 Religious freedom can only be guaranteed by countries which are based on the fundamental principles of a free democratic legal and constitutional structure. A recent survey on the situation of Christians which was carried out in around 40 of our field offices produced a very varied picture. The results of this survey are summarised in four articles in this edition. 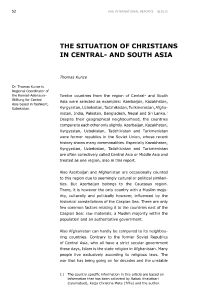 The Situation of Christians in Central and South Asia

Christians overall in South and Central Asia belong to a small minority, whose number lies nearly exclusively in the one figure percentage. Even if there may be not many Christians in South- and Central Asia, there are many different denominations. Freedom of religion is mentioned in all constitutions of the twelve Central and South Asia states. Christians are being attacked violently time and again in some countries of South Asia. But such persecutions are mainly conducted by nationalistic or religious extremists, less from the state itself. 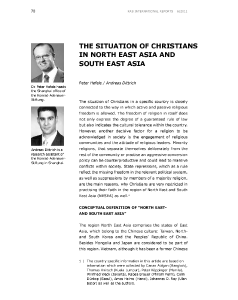 The situation of Christians in a specific country is closely connected to the way in which active and passive religious freedom is allowed. The freedom of religion in itself does not only express the degree of a guaranteed rule of law but also indicates the cultural tolerance within the country. However, another decisive factor is the engagement of religious communities and the attitude of religious leaders for a religion to be acknowledged in society.