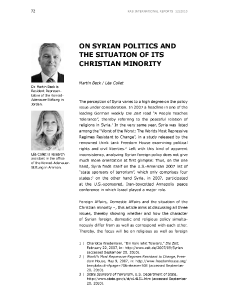 On Syrian Politics and its Christian Minority

Foreign Affairs, Domestic Affairs and the situation of the Christian minority – this article aims at discussing all three issues, thereby showing whether and how the character of Syrian foreign, domestic and religious policy simultaneously differ from as well as correspond with each other. Thereby, the focus will be on religious as well as foreign affairs. However, the issue of domestic politics is dealt with only briefly and mainly in light of links and (dis)similarities with the two other areas. 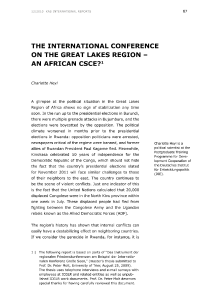 The International Conference on the Great Lakes Region – An African CSCE?

A glimpse at the political situation in the Great Lakes Region of Africa shows no sign of stabilization any time soon. There is an institution in the region that has taken up the cause of achieving lasting peace: The International Conference on the Great Lakes Region (ICGLR), an institutionalized conference initiated by the international community. The Conference on Security and Cooperation in Europe (CSCE) is often cited as being a prototype of the ICGLR. 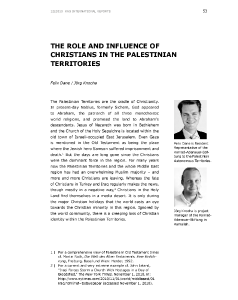 The Role and Influence of Christians in the Palestinian Territories 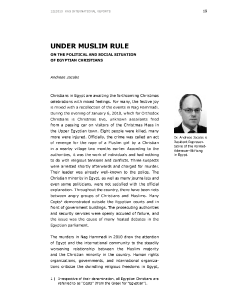 The murders in Nag Hammadi in 2010 drew the attention of Egypt and the international community to the steadily worsening relationship between the Muslim majority and the Christian minority in the country. Human rights organizations, governments, and international organizations criticize the dwindling religious freedoms in Egypt, denouncing the increased number of violent assaults and systematic discrimination of Christians. What are the causes and reasons for this development? 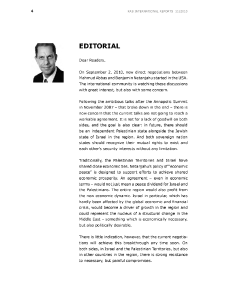 On September 2, 2010, new direct negotiations between Mahmud Abbas and Benjamin Netanjahu started in the USA. The international community is watching these discussions with great interest, but also with some concern. 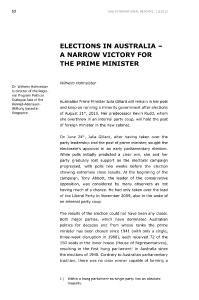 Elections in Australia - A Narrow Victory for the Prime Minister

Australian Prime Minister Julia Gillard will remain in her post and keep on running a minority government after elections of August 21st, 2010. Her predecessor Kevin Rudd, whom she overthrew in an internal party coup, will hold the post of foreign minister in the new cabinet. 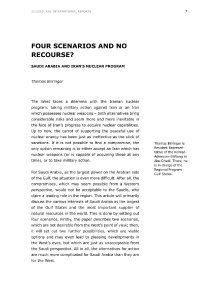 The West faces a dilemma with the Iranian nuclear program: taking military action against Iran or an Iran which possesses nuclear weapons – both alternatives bring considerable risks and seem more and more inevitable in the face of Iran’s progress to acquire nuclear capabilities. Up to now, the carrot of supporting the peaceful use of nuclear energy has been just as ineffective as the stick of sanctions. 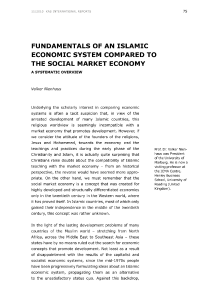 In the light of the lasting development problems of many countries of the Muslim world – stretching from North Africa, across the Middle East to Southeast Asia – these states have by no means ruled out the search for economic concepts that promote development. Not least as a result of disappointment with the results of the capitalist and socialist economic systems, since the mid-1970s people have been progressively formulating ideas about an Islamic economic system, propagating them as an alternative to the unsatisfactory status quo. 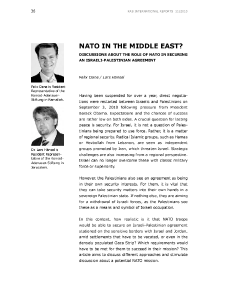 NATO in the Middle East? Discussions About the Role of NATO in Securing an Israeli-Palestinian Agreement

How realistic is it that NATO troops would be able to secure an Israeli-Palestinian agreement stationed on the sensitive borders with Israel and Jordan, amid settlements that have to be vacated, or even in the densely populated Gaza Strip? Which requirements would have to be met for them to succeed in their mission? This article aims to discuss different approaches and stimulate discussion about a potential NATO mission. 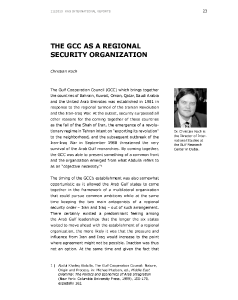 The GCC as a Regional Security Organization

What exactly is the GCC? Can it be considered a fullfledged security community that has over the time of its existence played a positive role in resolving security dilemmas in the Gulf? What do the terms of unity, integration, cooperation and coordination which are used so interchangeably actually mean within the context of this regional organization? And if the GCC has begun to shape the regional security environment, in what ways does this manifest itself?