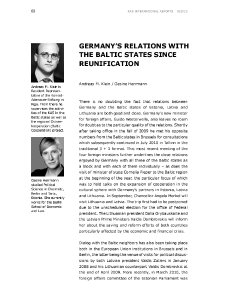 Germany´s Relations with the Baltic States Since Reunification

There is no doubting the fact that relations between Germany and the Baltic states of Estonia, Latvia and Lithuania are both good and close. Germany’s new minister for foreign affairs, Guido Westerwelle, also leaves no room for doubt as to the particular quality of the relations. Shortly after taking office in the fall of 2009 he met his opposite numbers from the Baltic states in Brussels for consultations which subsequently continued in July 2010 in Tallinn in the traditional 3 + 1 format. 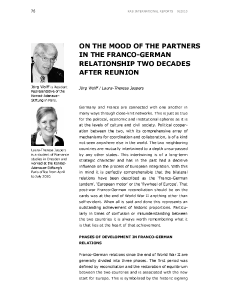 Germany and France are connected with one another in many ways through close-knit networks. This is just as true for the political, economic and institutional spheres as it is at the levels of culture and civil society. Political cooperation between the two, with its comprehensive array of mechanisms for coordination and collaboration, is of a kind not seen anywhere else in the world. The two neighboring countries are mutually intertwined to a depth unsurpassed by any other states. 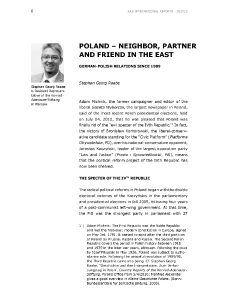 Poland - Neighbor, Partner and Friend in the East. German-Polish Relations Since 1989

Adam Michnik, the former campaigner and editor of the liberal Gazeta Wyborcza, the largest newspaper in Poland, said of the most recent Polish presidential elections, held on July 04, 2010, that he was pleased that Poland was finally rid of the “evil specter of the IVth Republic.” In fact, the victory of Bronisław Komorowski, the liberal-conservative candidate standing for the “Civic Platform”, over his national-conservative opponent, Jarosław Kaczyński, leader of the largest opposition party “Law and Justice”, means that the political reform project of the IVth Republic has now been shelved. 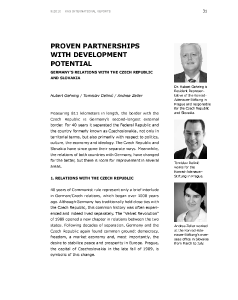 Measuring 811 kilometers in length, the border with the Czech Republic is Germany’s second-longest external border. For 40 years it separated the Federal Republic and the country formerly known as Czechoslovakia, not only in territorial terms, but also primarily with respect to politics, culture, the economy and ideology. The Czech Republic and Slovakia have since gone their separate ways. Meanwhile, the relations of both countries with Germany, have changed for the better, but there is room for improvement in several areas. 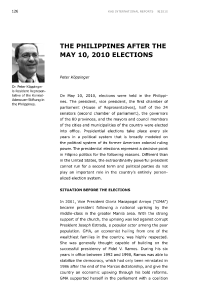 The Philippines After the May 10, 2010 Elections

On May 10, 2010, elections were held in the Philippines. The president, vice president, the first chamber of parliament, half of the 24 senators (second chamber of parliament), the governors of the 80 provinces, and the mayors and council members of the cities and municipalities of the country were elected into office. Presidential elections take place every six years in a political system that is broadly modeled on the political system of its former American colonial ruling power. The presidential elections represent a decisive point in Filipino politics for the following reasons. 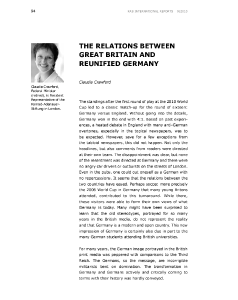 The Relations Between Great Britain and Reunified Germany

German reunification was viewed with skepticism in Great Britain, especially by the media. Since 1990 relations have repeatedly fluctuated between Great Britain and Germany. The causes for these fluctuations were the different administrations and their distinctive leaders, the influence of both their own and external perceptions of their countries, and above all the prospect of a political union in the form of the European project. 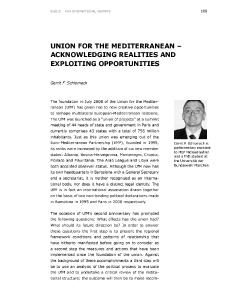 Union for the Mediterranean - Acknowledging Realities and Exploiting Opportunities

The foundation in July 2008 of the Union for the Mediterranean (UfM) has given rise to new creative opportunities to reshape multilateral European-Mediterranean relations.The occasion of UfM’s second anniversary has prompted the following questions: What effects has the union had? What should its future direction be? The author advises to acknowledge the lack of alternatives to regional and trans-regional cooperation. 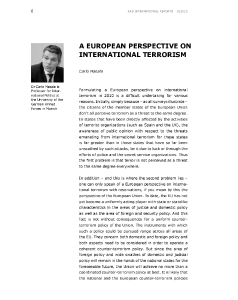 A European Perspective on International Terrorism

Formulating a European perspective on international terrorism in 2010 is a difficult undertaking for various reasons. Initially, simply because – as all surveys illustrate – the citizens of the member states of the European Union don’t all perceive terrorism as a threat to the same degree. In states that have been directly affected by the activities of terrorist organizations, the awareness of public opinion with respect to the threats emanating from international terrorism for these states is far greater than in those states that have so far been unscathed by such attacks. 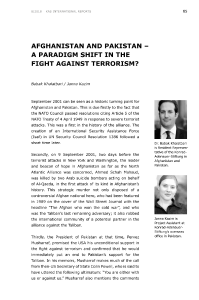 Afghanistan and Pakistan - A Paradigm Shift in the Fight Against Terrorism?

September 2001 can be seen as a historic turning point for Afghanistan and Pakistan. This is due firstly to the fact that the NATO Council passed resolutions citing Article 5 of the NATO Treaty of 4 April 1949 in response to severe terrorist attacks. This was a first in the history of the alliance. The creation of an International Security Assistance Force (Isaf) in UN Security Council Resolution 1386 followed a short time later. 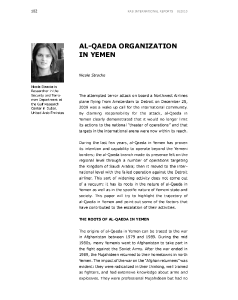 The attempted terror attack on board a Northwest Airlines plane flying from Amsterdam to Detroit on December 25, 2009 was a wake up call for the international community. By claiming responsibility for the attack, al-Qaeda in Yemen clearly demonstrated that it would no longer limit its actions to the national “theater of operations” and that targets in the international arena were now within its reach.