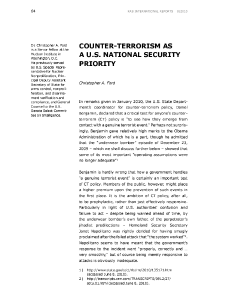 In remarks given in January 2010, the U.S. State Department’s coordinator for counter-terrorism policy, Daniel Benjamin, declared that a critical test for anyone’s counterterrorism (CT) policy is “to see how they emerge from contact with a genuine terrorist event.” Perhaps not surprisingly, Benjamin gave relatively high marks to the Obama Administration of which he is a part, though he admitted that the “underwear bomber” episode of December 23, 2009 – which we shall discuss further below – showed that some of its most important “operating assumptions were no longer adequate”. 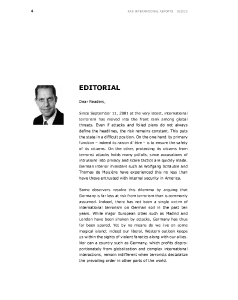 The contributions in this issue argue how Germany and the West can appropriately engage in combating terrorism – from both European and transatlantic perspectives. Crucial in this respect are not only the international networks that threaten us from without, but also “homegrown terrorists” – those who radicalize within European societies. In Germany the spectacular case of the Sauerland Group demonstrated that a decisive political challenge lies at the interface of integration and internal security. 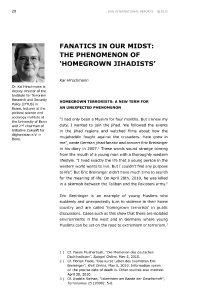 Fanatics in Our Midst: The Phenomenon of ‘Homegrown Jihadists’

“I had only been a Muslim for four months. But I knew my duty, I wanted to join the jihad. We followed the events in the jihad regions and watched films about how the mujaheddin fought against the crusaders. Hate grew in me”, wrote German jihad fanatic and convert Eric Breininger in his diary in 2007. These words sound strange coming from the mouth of a young man with a thoroughly western lifestyle. 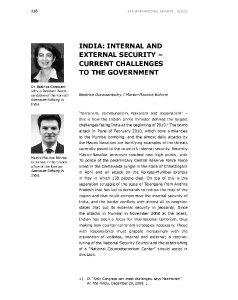 India: International and External Security - Current Challenges to the Government

“Terrorism, communalism, Naxalism and regionalism” – this is how the Indian prime minister defined the largest challenges facing India at the beginning of 2010. The bomb attack in Pune of February 2010, which bore similarities to the Mumbai bombing, and the almost daily attacks by the Maoist Naxalites are horrifying examples of the threats currently posed to the country’s internal security. 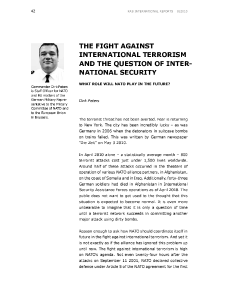 What Role Will NATO Play in the Future?

The fight against international terrorism is high on NATO ’s agenda. Not even twenty-four hours after the attacks on September 11 2001, NATO declared collective defense under Article 5 of the NATO agreement for the first time in its history. 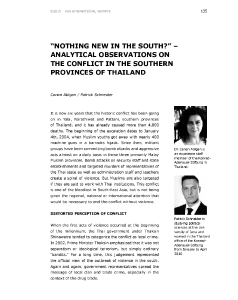 “Nothing New in the South?” – Analytical Observations on the Conflict in the Southern Provinces of Thailand

It is now six years that the historic conflict has been going on in Yala, Narathiwat and Pattani, southern provinces of Thailand, and it has already caused more than 4,000 deaths. The beginning of the escalation dates to January 4th, 2004, when Muslim youths got away with nearly 400 machine guns in a barracks hijack. Since then, militant groups have been committing bomb attacks and aggressive acts almost on a daily basis in these three primarily Malay Muslim provinces. 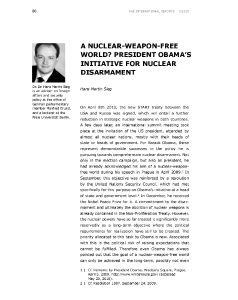 On April 8th 2010, the new START treaty between the USA and Russia was signed, which will entail a further reduction in strategic nuclear weapons in both countries. A few days later, an international summit meeting took place at the invitation of the US president, attended by almost all nuclear nations, mostly with their heads of state or heads of government. For Barack Obama, these represent demonstrable successes in the policy he is pursuing towards comprehensive nuclear disarmanent. 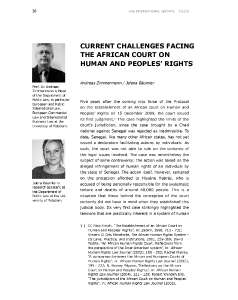 Five years after the coming into force of the Protocol on the Establishment of an African court on Human and Peoples’ Rights on 15 December 2009, the court issued its first judgment.1 This case highlighted the limits of the court’s jurisdiction, since the case brought by a Chad national against Senegal was rejected as inadmissible. To date, Senegal, like many other African states, has not yet issued a declaration facilitating actions by individuals. As such, the court was not able to rule on the contents of the legal issues involved. 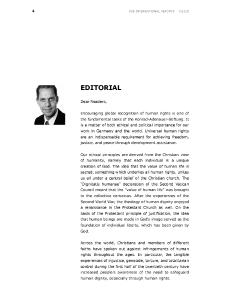 This edition of Auslandsinformationen focuses on the emergence and the work of human rights courts. Institutions such as these have the potential to ensure that human rights are observed in regions where such protection has, up to now, been limited. 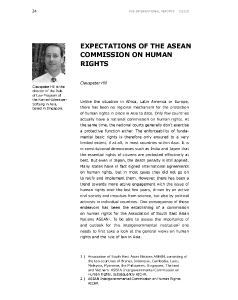 Expectations of the ASEAN Commission on Human Rights

Unlike the situation in Africa, Latin America or Europe, there has been no regional mechanism for the protection of human rights in place in Asia to date. Only few countries actually have a national commission on human rights. At the same time, the national courts generally don’t exercise a protective function either. The enforceability of fundamental basic rights is therefore only ensured to a very limited extent, if at all, in most countries within Asia.