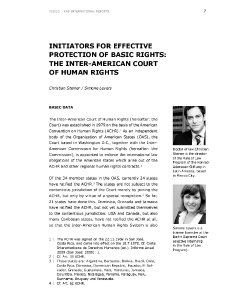 The Inter-American Court of Human Rights 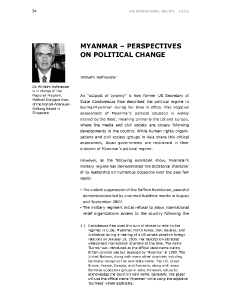 An “outpost of tyranny” is how former US Secretary of State Condoleezza Rice described the political regime in Burma/Myanmar1 during her time in office. This negative assessment of Myanmar’s political situation is widely shared by the West, meaning primarily the US and Europe, where the media and civil society are closely following developments in the country. While human rights organizations and civil society groups in Asia share this critical assessment, Asian governments are restrained in their criticism of Myanmar’s political regime. 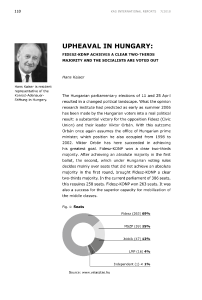 The Hungarian parliamentary elections of 11 and 25 April resulted in a changed political landscape. What the opinion research institute had predicted as early as summer 2006 has been made by the Hungarian voters into a real political result: a substantial victory for the opposition Fidesz (Civic Union) and their leader Viktor Orbán. 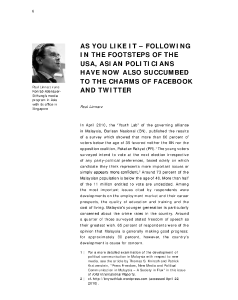 As You Like It - Following in the Footsteps of the USA, Asian Politicians Have Now Also Succumbed to the Charms of Faceb

In April 2010, the “Youth Lab” of the governing alliance in Malaysia, Barisan Nasional (BN), published the results of a survey which showed that more than 60 percent of voters below the age of 35 favored neither the BN nor the opposition coalition, Pakatan Rakyat (PR). The young voters surveyed intend to vote at the next election irrespective of any party-political preferences, based solely on which candidate they think represents more important issues or simply appears more confident. 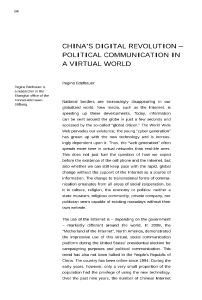 National borders are increasingly disappearing in our globalized world. New media, such as the Internet, is speeding up these developments. Today, information can be sent around the globe in just a few seconds and accessed by the so-called “global citizen.” The World Wide Web pervades our existence; the young “cyber generation” has grown up with the new technology and is increasingly dependent upon it. 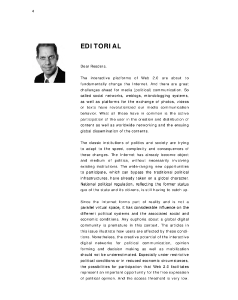 Since the Internet forms part of reality and is not a parallel virtual space, it has considerable influence on the different political systems and the associated social and economic conditions. Any euphoria about a global digital community is premature in this context. The articles in this issue illustrate how users are affected by these conditions. 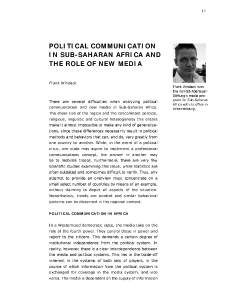 There are several difficulties when analyzing political communication and new media in Sub-Saharan Africa. The sheer size of the region and the concomitant political, religious, linguistic and cultural heterogeneity this entails make it almost impossible to make any kind of generalizations, since these differences necessarily result in political methods and behaviors that can, and do, vary greatly from one country to another. 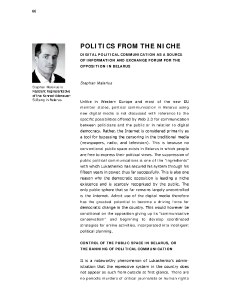 Politics from the Niche

Unlike in Western Europe and most of the new EU member states, political communication in Belarus using new digital media is not discussed with reference to the specific possibilities offered by Web 2.0 for communication between politicians and the public or in relation to digital democracy. Rather, the Internet is considered primarily as a tool for bypassing the censoring in the traditional media (newspapers, radio, and television). This is because no conventional public space exists in Belarus in which people are free to express their political views. 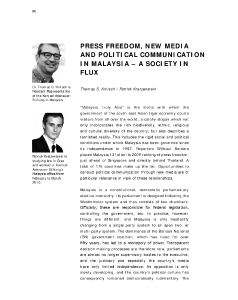 Press Freedom, New Media and Political Communication in Malaysia - A Society in Flux

“Malaysia, truly Asia” is the motto with which the government of the south-east Asian tiger economy courts visitors from all over the world; a catchy slogan which not only incorporates the rich biodiversity, ethnic, religious and cultural diversity of the country, but also describes a tarnished reality. This includes the rigid social and political conditions under which Malaysia has been governed since its independence in 1957. Reporters Without Borders placed Malaysia 131st on its 2009 ranking of press freedom, just ahead of Singapore and directly behind Thailand. 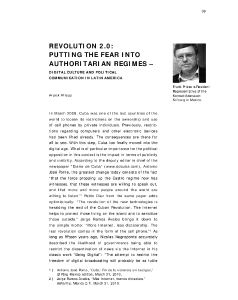 In March 2008, Cuba was one of the last countries of the world to loosen its restrictions on the ownership and use of cell phones by private individuals. Previously, restrictions regarding computers and other electronic devices had been lifted already. The consequences are there for all to see. With this step, Cuba too finally moved into the digital age. What is of particular importance for the political opposition in this context is the impact in terms of publicity and visibility.