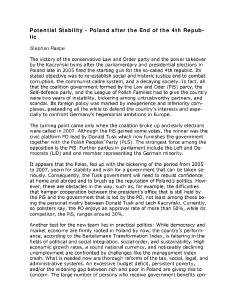 Poland after the End of the 4th Republic

The victory of the conservative Law and Order party and the power takeover by the Kaczyński twins after the parliamentary and presidential elections in Poland late in 2005 fired the starting gun for the so-called 4th republic. Its stated objective was to re-establish social and historic justice and to combat corruption, the communist cadre system, and a decaying society. In fact, all that the coalition government formed by the Law and Oder (PiS) party, the Self-defence party, and the League of Polish Families had to give the country were two years of instability, bickering among untrustworthy partners, and scandal. 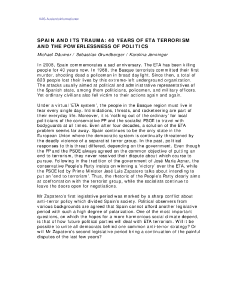 Spain and its Trauma:

In 2008, Spain commemorates a sad anniversary. The ETA has been killing people for 40 years now. In 1968, the Basque terrorists committed their first murder, shooting dead a policeman in broad daylight. Since then, a total of 823 people lost their lives by this extreme-left underground organization. 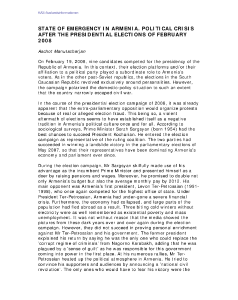 State of Emergency in Armenia

Political Crisis after the Presidential Elections of February 2008

On February 19, 2008, nine candidates competed for the presidency of the Republic of Armenia. In this context, their election platforms and/or their affiliation to a political party played a subordinate role to Armenia’s voters. 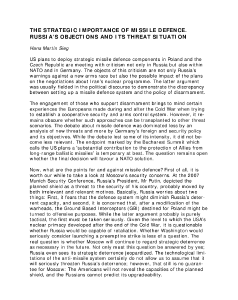 The Strategic Importance of Missile Defence

Russia´s Objections and its Threat Situation

US plans to deploy strategic missile defence components in Poland and the Czech Republic are meeting with criticism not only in Russia but also within NATO and in Germany. The objects of this criticism are not only Russia’s warnings against a new arms race but also the possible impact of the plans on the negotiations about Iran’s nuclear programme. The latter argument was usually fielded in the political discourse to demonstrate the discrepancy between setting up a missile defence system and the policy of disarmament. 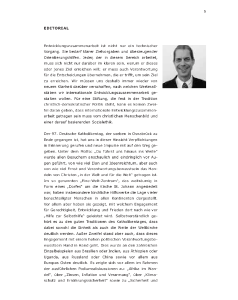 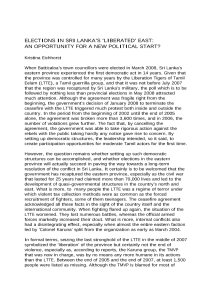 Elections in Sri Lanka’s ‘Liberated’ East: An Opportunity for a New Political Start?

When Batticaloa’s town councillors were elected in March 2008, Sri Lanka’s eastern province experienced the first democratic act in 14 years. Given that the province was controlled for many years by the Liberation Tigers of Tamil Eelam (LTTE), a Tamil guerrilla group, and that it was not before July 2007 that the region was recaptured by Sri Lanka’s military, the poll which is to be followed by nothing less than provincial elections in May 2008 attracted much attention. 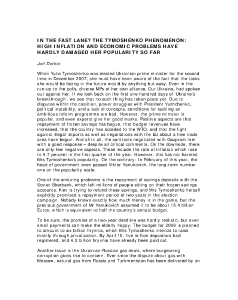 In the Fast Lane? The Tymoshenko Phenomenon

When Yulia Tymoshenko was elected Ukrainian prime minister for the second time in December 2007, she must have been aware of the fact that the tasks she would be facing in the future would by anything but easy. 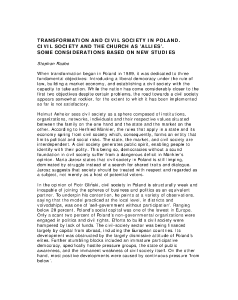 Some Considerations Based on New Studies

When transformation began in Poland in 1989, it was dedicated to three fundamental objectives: Introducing a liberal democracy under the rule of law, building a market economy, and establishing a civil society with the capacity to take action. While the nation has come considerably closer to the first two objectives despite certain problems, the road towards a civil society appears somewhat rockier, for the extent to which it has been implemented so far is not satisfactory. 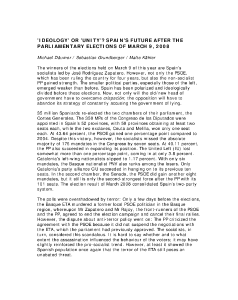 ‚Ideology’ or ‚Unity’? Spain’s Future after the Parliamentary Elections of March 9, 2008

The winners of the elections held on March 9 of this year are Spain’s socialists led by José Rodríguez Zapatero. However, not only the PSOE, which has been ruling the country for four years, but also the non-socialist PP gained strength. 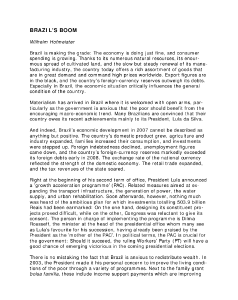 Brazil is making the grade: The economy is doing just fine, and consumer spending is growing. Thanks to its numerous natural resources, its enourmous spread of cultivated land, and the slow but steady renewal of its manufacturing industry, the country today offers a rich assortment of goods that are in great demand and command high prices worldwide.