75 years ago, the Charter of the United Nations was signed in San Francisco. It laid the foundation for a new international order based on the ideal of institutionalised cooperation. Cooperation instead of confrontation – that was the lesson learnt from the catastrophes of two world wars. How is international cooperation doing today? Is there any truth in all the gloom, all the voices bemoaning the end of the multilateral world order? Why is it important, despite all difficulties and weaknesses, to continue to defend this policy model?
October 5, 2020 3 Ordering Information

Security, trade, health, migration, and climate change – all these challenges are global by nature, and solo efforts on the part of individual nations have no place here. Instead, it requires international associations, forums for dialogue, and locations to establish and enforce common rules, as Peter Fischer-Bollin explains. The global order is currently undergoing a far-reaching shift, which puts pressure on rules-based multilateralism. Laura Philipps and Daniela Braun point to three primary trends: growing competition between the great powers, increasing deglobalisation, and new, informal ways of international cooperation.

Tried and tested forums continue to be important in this environment. The 75-year anniversary of the United Nations provides an occasion to reflect on structural deficits and potential approaches to reform. Increasing confrontation between the US and China is one of many factors leading to a “paralysis of UN diplomacy”, as Andrea Ostheimer writes. Another multinational alliance presents mixed results, too. At the moment, NATO needs to overcome a number of elementary challenges. One of these is that the alliance’s fundamental principles are being increasingly called into question, as Philipp Dienstbier explains. That is why Europeans need to play a more active role and increase their own defence spending.

In addition to Western and European forms of multilateralism, there are regional associations. However, the value placed on the principle of multilateral cooperation varies widely. In the Middle East and North Africa, multilateralism has not yet been able to establish itself as a defining model of order, as Michael Bauer and Edmund Ratka relate. Yet, the potential for sub-regional cooperation is definitely present especially in such areas as economy and energy. In Latin America, on the other hand, multilateral cooperation has a long tradition. The importance attached to it varies from country to country. Domestic economies and individual interests often result in Latin American alliances being fragile and short-lived, as Winfried Weck and Teresa Marten argue. In Asia, on the other hand, ASEAN represents a successful association at the regional level. Nevertheless, China’s growing influence is becoming a threat to it, as demonstrated by Daniel Schmücking and Christian Echle.

It is clear that authoritarian regimes have long since learnt how to use multilateral organisations to assert their own interests. The platforms have thus become arenas of system competition, as Olaf Wientzek and Sebastian Enskat describe. In order to combat the disintegration of multilateral forums, the West and, especially, the EU must make attractive offers with respect to security policy and economic cooperation. Different ambitions and ideas of political order are increasingly coming to a head on the internet. Growing restrictions on the digital space imposed by authoritarian states demand support for global efforts to safeguard the original open character of the internet while counteracting the restriction of basic rights, Christina Bellmann writes.

There is no doubt that the challenges facing the multilateral order are great. Yet, there is no reason to write it off. Especially against the background of authoritarian efforts, ﻿rules-based order has to be defended self-confidentely: preserving world peace and international security, ﻿promoting equality among peoples, protecting human rights, and encouraging international cooperation. The ideas that led to the founding of the UN 75 years ago are by no means outdated. 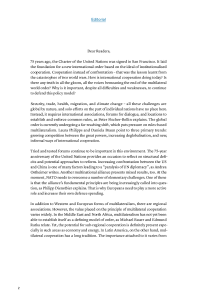