by Dr. Gerhard Wahlers
If you have been following public debate on youth and politics in Germany over the last few years, you may have gained the impression of a generation of young people who are increasingly committed to standing up for their interests while, at the same time, feeling that their concerns are not being adequately heard. Number one among these concerns: climate change.
December 15, 2021 4 Ordering Information

Since 2019, climate strikes and the Fridays for Future movement have strongly defined the image of “youth” in Germany. But does this impression stand up to scrutiny? The September 2021 federal elections certainly caused a few cracks to appear in this image, with as many first-time voters opting for the Liberals as for the Greens, their supposedly “natural” favourite.

If we cannot assume that a generation of young people in Germany share the same interests, then the picture becomes even more disparate when we look beyond Germany and Europe. In some cases, there are major differences between young people’s aspirations and priorities, their social circumstances, and opportunities for political participation. In the West, young people are free to protest and voice their concerns, whereas in other countries this could mean losing their freedom or even their lives. While young people in wealthier nations may be preoccupied with important and fundamental questions about the future because their own present material needs have generally been met, the lives of their peers in other parts of the world tend to be dominated by worries about their personal financial situation and that of their families. In Germany, there is talk of lowering the voting age to 16, partly because of the numerical superiority of older voters. Meanwhile, young people in Sub–Saharan Africa make up the majority of the population.

And yet we can still observe similarities across borders. On the one hand, young people are interested in politics and keen to be involved, while being disenchanted with traditional institutions such as political parties on the other. Elisabeth Hoffmann, Florian Karner, Katharina Hopp, Alina Reiß, Sebastian Grundberger, Thomas Schaumberg, and Laura Rubio highlight this common characteristic among young people when looking at West Africa, Southeast Asia, and Latin America. They illustrate the fact that many young people are worried about issues such as corruption, lack of job opportunities, and – especially during the pandemic – the health of their families. Although many acknowledge that climate change is a challenge that has to be resolved multilaterally, the authors note that “climate strikes and similar protests are at best a marginal phenomenon limited to better-off areas”.

About one quarter of young people worldwide are affected by violent conflict. In her article, Andrea Ellen Ostheimer traces how the United Nations discourse on the role of youth in conflict has changed over the years, with increased focus being placed on young people’s positive contribution to conflict prevention and mediation.

The Israeli-Palestinian conflict dominates the everyday lives of young people in the Palestinian territories. Steven Höfner and Alena Jabarine describe the situation of a generation subjected to the dual burden of Israeli occupation and the rigid authoritarianism of Fatah and Hamas and which is trying to find a common voice – particularly by digital means.

According to Benno Müchler and Anna Reismann, young people in Sub-Saharan Africa are “both feared and courted”. The sheer number of young people – among them many potential voters – ensures that youth are regularly wooed, at least in the run-up to elections. In practice, however, the youth policy of many states and the African Union tends to be far removed from the everyday lives of young people. Looking specifically at Nigeria, Vladimir Kreck investigates how legal, cultural, and economic barriers prevent young people’s political participation in the most populous country on the continent.

Kevin Oswald and Luiz Gustavo Carlos focus on educational and career opportunities for young people. In Brazil, structural inequality is leading to the emergence of a “neither-nor generation”. Far too many young people can neither access education nor a job – a situation that previous left-wing governments, as well as today’s Bolsonaro government, have failed to permanently resolve.

And finally, we turn our gaze towards Europe. In spring 2021, students Hugo Leclerc and Jannis Stöter founded La DenkFabrik, a think tank designed to spark interest in the Franco-German partnership among young people on both sides of the Rhine. The pair talked to International Reports about their project, the state of the Franco-German partnership, and how young people on the old continent can be more involved in the European integration process.

Young people from all over the world want to create change. Yet there are no consistent answers to the question of what really matters to them and the obstacles they encounter. This is highlighted by the articles in this issue of International Reports. What is more, the contrast between young and old often invoked in the German debate seems misleading when applied to many of the issues concerning young people around the globe. Peace, democratic participation, an economy based on merit and equal opportunity rather than corruption – here the goals of young people are likely to coincide with the wishes of many others in their societies. 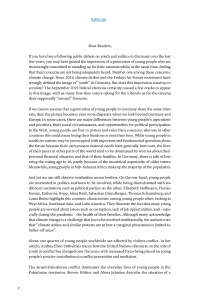