The Brazilian Conference on Climate Change

For the decarbonization of the Brazilian economy and the cope with the climate emergency.

The Brazilian Conference on Climate Change

For the decarbonization of the Brazilian economy and the cope with the climate emergency.

Registrations for the Human Rights II course, a partnership between the Konrad Adenauer Foundation and the Center for International Law, are now open!

Registrations for the Human Rights II course, a partnership between the Konrad Adenauer Foundation and the Center for International Law, are now open!

A forum designed for training, exchange and articulation among women in local public management.

A forum designed for training, exchange and articulation among women in local public management.

The goal of the project supported by KAS is to bring political education to the entire country, offering training to people who want to participate in their cities’ politics.

The goal of the project supported by KAS is to bring political education to the entire country, offering training to people who want to participate in their cities’ politics.

Democracy and Legitimacy: How important is Electoral Monitoring for Brazil in 2022?

Celebrating the International Day of Democracy 2021

Course on Public Policies and Social Doctrine of the Church

Each month, the seminar brings together great specialists from the public and private agenda to debate economic and political aspects that go through environmental policies. Online streaming is free and open to the public.

The project is part of the second module of the "Investigative Journalism" course, held in partnership with Transparency International and ABRAJI.

Second meeting of 2021 of the Sustainable Amazon Forum

The Sustainable Amazon Forum has the mission and vocation of promoting productive dialogues between different actors with the potential to reduce differences and act in a purposeful way to encourage sustainable development in the Amazon.

In this edition of the National Meeting of the Forum of Secretaries for the Environment of Brazilian Capital Cities (Forum CB27) the topic of discussion will be climate financing.

Christian Matthäus, political adviser to KAS Brazil, launched the fourth edition of the Grêmio International SISV simulation at Rio de Janeiro's famous São Vicente secondary school with a speech about European democratic values, the purpose of the European Union (EU) and the repercussions of the Greek 'No' in the referendum regarding the EU creditor-countries' proposals.

Felix Dane, Head of KAS Brazil, accepted, on behalf of the Konrad Adenauer Foundation, the highest award bestowed by the Women's Association "PSDB Mulher", during a lively ceremony in Brasília. “PSDB Mulher” is a division of the PSDB party, political partner to the German CDU, KAS' political base. KAS Brazil was honoured for its commitment to the promotion of women's participation politics in Brazil. Aécio Neves, PSDB party chairman, as well as Solange Jurema, chairman of the “PSDB Mulher”, expressed thoughts of gratitude towards both Felix Dane and KAS Brazil as a whole. 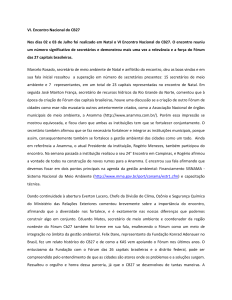 KAS Brazil in the Amazon

Christian Matthäus, KAS Brazil Trainee, visited the KAS project partner PSA (the Health and Happiness Project) at its headquarters in Santarém in the state of Pará, in Northern Brazil.

The Multinational Development Policy Dialogue of the Konrad Adenauer Foundation organized a dialogue programme for high-ranking security experts from Brazil and Mexico.

The second 2015 edition of the series “Virtual Democracy” took place at the Federal University of Ceará in Fortaleza focusing on the economic implications of virtual business activities. In this sense, what role should be attributed to a social-market economy in them? Postgraduates and students in economy debated these issues with experts in the field until a power outage brought the metropolis of Fortaleza to standstill, thus making clear to all the dependence on power and the actuality of power-security- compliant policies.

For the fourth time the KAS Alumni of Rio de Janeiro met in order to discuss the effects of the internet on democratic opinion-forming processes. Since 2012 the focus of KAS lays on issues of Virtual Democracy and the impact of the internet on the democratic process. Friedrich Christian Matthäus, Trainee of KAS Brazil, informed in a brief lecture about the series of workshops about “Virtual Democracy”.

Debates cycle of Parliament's School of the Municipality of São Paulo

Christian Matthäus lectures on the political system in Germany

The Italian deputy Fabio Porta, representing Italian residents in Latin America in the Roman parliament, presented Italy’s recent electoral reform. Soon after, Christian Matthäus of the Konrad Adenauer Foundation spoke about the essential characteristics of the German system to initiate a debate on the possibilities of reform in Brazil. The comparison of the three political systems aims to as push for a better understanding of alternatives and their benefits.

The first edition of the series "Virtual Democracy" took place at the Dom Bosco Catholic University in Campo Grande, capital of the Brazilian state of Mato Grosso do Sul, with the participation of many experts on issues of the social implications of virtual activities. In two thematic panels and with the participation of over 100 student representatives they discussed the current challenges and political issues that Internet-based activities bring with them.