Data Innovation in a Smart City

E-Government and Transport in Singapore

Data fuels digital change. The ability to collect, process, and make available ever-increasing amounts of data is the key to innovation and growth. This report is the first in a series surveying seven different Asian territories to deepen understandings of innovation and data policies, and contribute to debates about data governance and data protection. The report is centered on Singapore’s digital public services, especially the Government Technology Agency (GovTech) and innovations introduced during the COVID-19 period, as well as mobility and online ride-hailing services. Through these cases, we seek to understand how innovation is driven in the context of relationships among key stakeholders such as citizens, government agencies, firms and research institutions.
November 23, 2020 Ordering Information

Digital innovation is a top priority for Singapore and since 2014, the government has spearheaded a nationwide intiative to become a “Smart Nation”. The state is not only supporting innovation in the private sector, but also increasing the use of digital platforms in delivery of public services. This has been carried out with remarkable success: It was Singapore’s agency GovTech that developed the world’s first Bluetooth-based COVID-19 contact tracing app, TraceTogether. In addition, “Grab”, once a startup and former competitor of the US service “Uber”, is now based in Singapore and has developed into the largest ride-hailing platform app in Southeast Asia, with tremendous influence throughout the region.

This first report in the series “Data and Innovation in Asia-Pacific” looks at how the government is bringing about data-driven innovation and how data in the transport and mobility sector is used, especially by ride-hailing platforms, which have become an important pillar in the transport system.

Here are some key findings:

1. As a comprehensive government program, the “Smart Nation Initiative” states clear objectives for digital innovation projects, including in the areas of transport and digital public administration examined in this report. The focus is not only on building technological infrastructure and transforming processes but also specifically on open data and data analysis for policy making. Overall, there is well-developed infrastructure, existing government capacities and a broad awareness of the added value of data and data analysis.

2. The Government Technology Agency or GovTech is responsible for delivery of digital public services and oversees the digital transformation of all government services. It develops digital infrastructure for government agencies, processes government data, and develops apps and digital services. In the fight against COVID-19 alone, the agency had developed twelve apps and digital services by summer 2020. These include the world‘s first Bluetooth contact-tracing app, a chatbot for questions about COVID-19, and a daily update on case numbers and regulations via WhatsApp and Telegram.

3. Nonetheless, technological solutions in fighting a pandemic have their limits. In Singapore, too, privacy and functionality concerns played a role in the discussion about how the tracing app would work. The comparatively low number of downloads may be seen as an indirect “voting with your feet”.

4. The high level of government digital innovation in Singapore is also fueled by the belief that in the areas of public infrastructure innovation must be managed by the government due to the lack of a profit incentive.

5. Regulations for handling data are approached not just from the perspective of protection, but also with the goal of driving data-based innovation. The regulations on data protection, which are set out in the Personal Data Protection Act (PDPA), only apply to private individuals and private companies. Furthermore, compared to the EU’s General Data Protection Regulation (GDPR), they give leeway for broader terms of collection, use and disclosure of data. These provisions do not apply to government agencies, which are instead bound by internal regulations that are not transparent to the public.

6. On the one hand, there is a general belief that too much privacy prevents innovation. On the other hand, experts also pointed out that high data protection standards can in turn lead to certain innovations, for example in the area of cyber security to protect the data collected. During COVID-19, Singapore has been able to be agile with data innovations even during a pandemic, because of its existing capacities, such as the presence of an agency like GovTech to develop technological tools, as well as high mobile penetration and digital literacy. But ongoing concerns about the management of citizen data collected and used by government agencies are expected to increase, especially in the wake of incidents such as a 2018 breach of the health records of millions of citizens.

7. In Singapore, ride-hailing platforms such as Uber developed as disruptive players to an important part of the transport system. While Uber has since left the region, Southeast Asian platforms continue to be in fierce competition and also prompt accelerated innovations for existing taxi companies.

8. The case study examines a specific example of private sector collaboration with universities: the Grab-NUS AI Lab. Grab does not yet have the capacity to do all its research internally, unlike more established firms like Google. While it processes the data necessary for its everyday operations internally, researchers from the National University of Singapore help to analyse data with the objective of developing innovations in the organisation’s processes. Corresponding PhD programs are funded by the Economic Development Board.

9. Since the transport companies do not publicly share their treasure trove of data for reasons of competition, the universities and public research institutions also act as trusted third parties who can analyze the data. In this way, researchers can gain insights from which everyone can benefit without the companies having to disclose or publish their data to one another.

10. Singapore currently grants 1-2 year trial licenses for bike sharing within a regulatory sandbox. While previous bicycle and e-scooter sharing programs have been discontinued, attempts to find viable models of bike sharing are still ongoing. In the regulatory sandbox, companies have the opportunity of obtaining a full license if they have ensured during this trial period that their business model can provide desirable services while mitigating problems like indiscriminate parking of bicycles. Licensees are obliged to share data including the locations of unused bikes, distances traveled and times of travel with the authorities on a weekly basis. This data is meant to optimise the national transport system. However, any concerns on the part of customers play a subordinate role here. 5. 6.

11. In contrast to the data minimization obligations enshrined in the EU‘s GDPR, ride-hailing companies usually collect as much data as possible and later decide how it should be analyzed. Representatives from companies suggested that even those responsible for data processing might not know the value of the data at the time of collection. In the case study of ride-hailing platforms like Grab and Gojek, data provided the basis for service diversification. For example, data that the platform has collected through its taxi services are used to establish new services such as food delivery. Discussions about data portability or the disclosure of aggregated customer data from companies for use by the general public are still ongoing.

12. In Singapore, it is sometimes difficult for multinational companies to aggregate and analyze data from different countries due to the different data protection and nationalisation laws in their respective locations. In contrast, the European single market for data targeted for 2021 certainly offers great advantages for companies based in Europe. 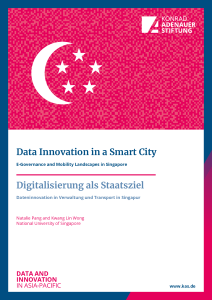 Data and Innovation in Singapore and India