State-building needs institution-building – improving the rule of law concept implies institutionalizing an independent judiciary. An effective guarantee of the constitutional order can only be achieved by effective review procedures that uphold fundamental principles of government, constitutional rights and liberties etc.
June 29, 2018 Ordering Information

As a consequence of lessons learned from the past and the disastrous period of National Socialism, Germany’s first chancellor, Konrad Adenauer, inaugurated the Federal Constitutional Court of Germany on September 28, 1951. Every misfeasance of the constitution should be prevented.

Through the German Basic Law (Grundgesetz), which has been in force since 1949, fundamental rights are guaranteed to individuals, some to all human beings, some to citizens of Germany only. Their interpretation and enforcement by the Federal Constitutional Court have been of utmost significance in turning the Basic Law from a technical instrument into an identity shaping national document.

The Federal Constitutional Court has assumed its role as a true “guardian of the constitution”, not only but especially in regard to the protection of fundamental rights, and is therefore highly respected by the German people. The Court was very successful at striking a fair balance between individual rights and the interests of society as a whole. As a result, the Federal Constitutional Court is a cornerstone in Germany’s modern democracy.

During the last decades, the interest in the jurisprudence of the German Federal Constitutional Court has increased considerably among academics and political actors from all over the world. Taking note of this increasing demand, the Konrad-Adenauer-Stiftung took the initiative for this project aiming at making some key decisions of the German Federal Constitutional Court accessible to judges, lawyers and scholars who do not speak German.

The collection focuses on decisions pertaining to fundamental rights, which constitute an essential field of Constitutional Court jurisprudence, and delineate the sphere of an individual to society and state. Decisions on the following topics can be found (non-exhaustive enumeration):

Translations are available in the following languages:

The Rule of Law Programmes of the Konrad-Adenauer-Stiftung

The Konrad-Adenauer-Stiftung (KAS) is a German foundation which runs projects in over 120 countries worldwide. The Rule of Law Programmes supplement our global promotion of democracy and political dialogue with their transnational approach.

Our goals are the promotion of...

For inquiries, please contact the coordinator of the Rule of Law Programmes in Berlin.

To our Rule of Law Programmes 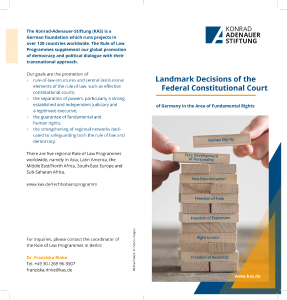 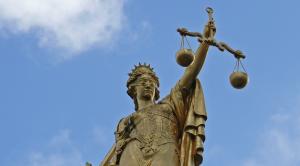