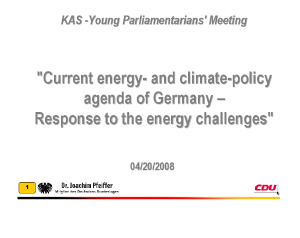 Presentation given by Dr. Joachim Pfeiffer at this year's Young Parliamentarians' Meeting in Reykjavik, Iceland. The topic of this year's meeting was climate change. 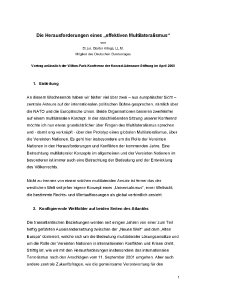 The Challenges of an "Effective Multilateralism"

Speech by Dr. Günter Krings at the European Roundtable in Wilton Park in April 2008

Dr. Günter Krings' introductory speech can be downloaded as a PDF (in German only). 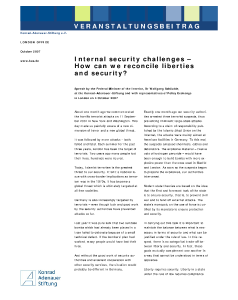 Internal security challenges – How can we reconcile civil liberties and security?

Speech by the Federal Minister of the Interior, Dr Wolfgang Schäuble, at the Konrad-Adenauer-Stiftung and with representatives of Policy Exchange

Crisis as Opportunity: Problems, Challenges, Frontiers and Chances for the European Union

No other invitation in British academic life could attract me more than the opportunity to deliver the annual Adenauer Lecture at the European Studies Centre, here at St Antony’s College, Oxford. It is not just that it is a great honour to follow in the footsteps of so many distinguished predecessors, over many years. It is that - for me personally - it is especially inspiring to give a talk dedicated to the memory of Konrad Adenauer - one of the founding fathers of today's Europe, to whom my country owes so much - and one delivered here in the European studies centre of one of the leading universities in the world. The former Chancellor of Oxford University, Roy Jenkins, was once asked: "What is difference between a speech and a lecture?" He replied: "A lecture is characteristically a little longer than a speech, but not necessarily more interesting!" As a professional politician, like Lord Jenkins, I understand the perils of that distinction, and will try to keep what I say as succinct and interesting as possible, consistent with its rubric of it being a "lecture".