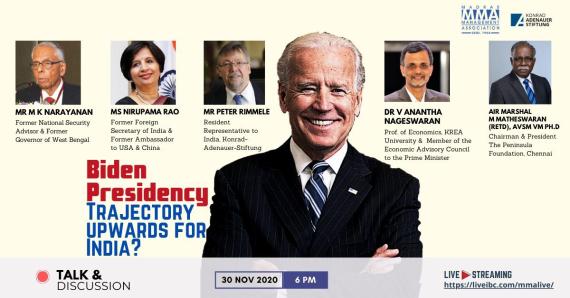 Mr Peter Rimmele, Resident Representative to India of Konrad-Adenauer-Stiftung delivered the introductory remarks in which he said that a new President taking power would not mean that everything changes. According to him, the US have certain interests and these are not going to change. “America First policy is here to stay but in a version that is not so much in your face,” he suggested. He also said that Indo-US relations have improved permanently regardless of the administration and that this will go on.

“When Donald Trump became President and took several decisions including questioning the role of NATO, German Chancellor Angela Merkel mirrored what many Europeans felt in 2017 that Europe would need to take its destiny in its own hands, “ he said and added that China is another major area of concern for the US and whatever policy the new US administration takes will have to be flanked by the Asian and European national efforts.  He concluded his speech saying that it is matter of speculation if the Biden administration will be in favour of a rules-based order that India and Germany believe in or the predominance of another newly upcoming superpower which dictates its own understanding of an international order.

Air Marshal M Matheswaran (Retd) AVSM, VM, PhD moderated the discussion. He pointed out that the Trump administration was transactional in nature and in dealing with countries, he followed a zero-sum game. He said that economy was doing well under Trump and that there was a strengthening of the Indo-US relations in strategic terms. But for the pandemic, Trump might have returned to power, he felt and said that the pandemic exposed the chinks in the US healthcare system and in its leadership.

Mr M K Narayanan treaded on a cautious note and said that he does not believe that Indo-US relations will greatly improve just because there is a Biden Presidency. He felt that relationship with India will not be a top priority on the US agenda. Between now and January 2020, he did not rule out any further surprises. Based on his earlier interactions as NSA with Joe Biden as Vice-President of the US, he opined that Biden is cautious by nature and that he takes considered decisions unlike his predecessor Donald Trump.

According to Narayanan’s calculations, Biden’s priority in his first 18 months will be more about domestic issues; on the external front, managing US-China relations will be their top priority since China is openly challenging the US pre-eminence in the economic field and is fast closing the gap in the military space as well. Europe that went out of Trump’s lens will come back to US focus. He predicted that in Biden’s team, Jake Sullivan as the NSA will be a key player and who believes in strategic co-existence rather than strategic competition; there could be pressure for India from the new dispensation on human rights issues and India’s stand on Kashmir and Article 370.

Ms Nirupama Rao said that entropy is a permanent state of global Affairs today. Quoting a China expert based in US, she said the US-China relations will be defined by 3Cs – competition, containment and confrontation. She summed up the roadmap of Indo-US relations under 4Cs – Continuity, Consensus, Co-operation and Compatibility; there will be continuity of relationship with India, consensus in US about having a comprehensive, global, strategic partnership with India, mutual co-operation between the countries and both nations have a natural compatibility. She said that Biden will take a middle road and not root for adventurism. She predicted that a Berlin wall will be coming up in Technology between US and China, especially in the backdrop of 5G and Huawei.  She anticipates more intelligence sharing and inter-operability between India and the US.

Dr V Anantha Nageswaran said that as per an article in New York Times, the blue collar people migrated towards Republicans and those with an annual income greater than 68,000 USD gravitated towards Democrats. Listing out the risks under the new administration, he said that Indian rupee is likely to appreciate by 1 to 2% every year and this may lead to Indian entities seeking higher foreign debt. The second risk factor is if Biden’s term will be a one-term rule or a two-term rule; if Biden will be able to complete his 4 years as President in a healthy state or if it will be a Biden-Harris Presidency through the first term. “India will face headwinds through human rights concerns flagged by US and also benefit from tailwinds,” he said. According to him, India does not stand to lose much by staying out of RCEP.

The panel also shared their views on the other Key Issues such as:

- What will be Biden administration’s stand on Trade, Technology and Investment?

- How will global economy react to the new administration?

- How will Indo-US military-industrial partnership shape up in the days to come?

- Will India be marginalized by China?

- What will be US stand on Afghanistan and Climate affairs?

- Will India benefit from the new US immigration policy?

- What will be the role of John Kerry as Climate envoy?

- Will reforms happen in UN?

- Will the new administration help India in getting Permanent Member status in UN Security Council?

- Will the rise of far right populism continue globally?

Group Captain R Vijayakumar (Retd), VSM moderated a Q&A session where questions from online viewers were taken up.  Mr N Sathiya Moorthy proposed a vote of thanks. The event concluded at 8.00 pm.