100 Years since the Sykes-Picot Agreement: Lessons for the Middle East

One hundred years have passed since the signing of the historic Sykes-Picot Agreement to divide the Middle East, a region rich in natural resources, between France and Britain. The purpose of the agreement was to determine the areas of territorial control by these two superpowers following the fall of the Ottoman Empire after the First World War.Under the agreement, France acquired Lebanon, Syria, south and central Turkey. Britain received Palestine (which included what would become Jordan), Iraq, and the Persian Gulf. The Land of Israel was intended, according to the agreement, was to be divided into areas under direct British-control, including: an enclave in Haifa, and the Negev. The upper Galilee was designated for French control. The rest of the country would be under international jurisdiction.

Those countries which were created artificially by borders arbitrarily drawn have not stood up to the test of time. Over the years, the area experienced many bitter wars between neighboring countries, between tribes and between warring religious groups (Sunnis and Shiites), and today the Middle East is ablaze.

This conference is designed to examine the historical events and processes that led to the current instability in the Middle East, surveying both the region as well as Europe. The conference will also examine the portrayal of Israel as a foreign body injected into the Arab-Muslim world. The conference will give perspective on the naive and misguided understanding of Middle Eastern cultures that has led to significant failures in achieving stability in the Middle East as well as the failed Western efforts at peacemaking. Did Western powers underestimate and misunderstand the Middle East then and now, exemplified by their befuddlement at the outbreak of the "Arab Spring," misguided support for the "Muslim Brotherhood" in Egypt, indifference towards the conflicts in Iraq and Syria, and the establishment of ISIS? Analysis of past failures in Western understanding is critical in order to cope with potential future regional problems.

The conference will discuss strategic issues and contemporary historical perspectives, as well as examine the legal aspects and international law.

Conference Program: 100 Years since the Sykes-Picot Agreement: Lessons for the Middle East
Download 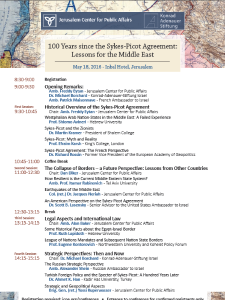