The Israeli elections scheduled for March 17th have the potential to be historic for Arab citizens. This is, in large part, due to the formation of the Joint List, which stands to become perhaps the third-largest faction in the Knesset, and a potential electoral ‘kingmaker.’ Consequently, on March 10, 2015, our Konrad Adenauer Program for Jewish-Arab Cooperation at the Tel Aviv University hosted a conference on “Arab Politics in Israel and the 20th Knesset Elections.”

An event of our EU-Project "Partners for Regional Leadership"

Our EU-Project “Partners for Regional Leadership” (PRL) started its second round in 2014. The Israeli part of the tri-national program held a workshop concerning identity, for 15 to 17-year old students, on the 25th and 26th of December. The second workshop weekend (23rd – 24th of January 2015) carried out with the Israeli teenagers, put its focus on different forms of leadership. 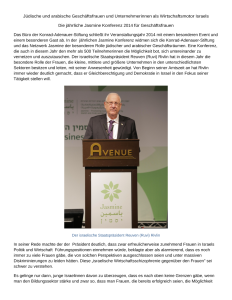