On December 9th, the Konrad Adenauer Stiftung and the Israel Democracy Institute will host their third workshop on Populism.

Russia in the Middle East

Strategic Implications of Russia’s Involvement in the Middle East

The INSS Russia Program, in cooperation with Konrad Adenauer Stiftung Israel,invites you to an international conference Among the conference topics: Russia in the international arena, Russia in the Middle East, and the relationship with Israel Panels open to the public and closed forums with leading experts from Russia,EU, and Israel More details to follow

On November 25-26, 2019 the National Security and Democracy Program at IDI will hold its annual conference in Jerusalem in cooperation with the Konrad-Adenauer Stiftung

The study program will focus on Poland as a member of the European Union, its European integration process and current developments in the Polish society such as euro-skepticism, populism and anti-democratization trends. We will discuss the connection between the distant past of Poland, its role in World War II, the communist past, the westward turn, the rise of the right, its approach toward minorities, the place of the Jews, and its connection with Israel.

The INSS Arms Control and Regional Security Program, in cooperation with the Konrad-Adenauer-Stiftung, will hold the annual Arms Control Conference and Experts Forum on November 11-12, 2019 at INSS.

Israeli Diplomacy in the Age of Ascendant Authoritarianism

Together with the Israel Council on Foreign Relations (which operates under the auspices of the World Jewish Congress), the Konrad-Adenauer-Stiftung Israel organizes the conference "Israeli Diplomacy in the Age of Ascendant Authoritarianism" on Thursday, September 26, 2019 at The Van Leer Jerusalem Institute 43 Jabotinsky Street, Jerusalem Conference Hall.

The ideological roots of the "price tag" phenomenon

Exploring the subculture of “religiously-motivated racism" in Israel

The subject of Human Rights in Iran is a sensitive issue for the European Parliament members, and though there is a clear consensus on the fact there are severe human rights violations in Iran, the question how to deal with the human rights violations in Iran is very controversial both between political groups, as well as within political groups. Thus, on December 2nd, 2007, in cooperation with the Konrad-Adenauer-Stiftung, 19 students of the European Forum and the Helmut Kohl Institute for European Studies of the Hebrew University participated in a challenging exercise of simulating the European Parliament debate and resolution on breaches of human rights in Iran. The students stepped into the shoes of Members of the European Parliament, and had held a heated debate on the situation in Iran, and the proper EU response, attitude and action vis-a-vis Iran.

With the official beginning of the new school year 2007/2008, 15 schools from Israel, the Palestinian Autonomous Territories and Jordan have started the classroom program on Civic Education, developed in the framework of the EU co-funded project "Civic Education as a Leverage for Peace", implemented by the Konrad-Adenauer-Stiftung and its partners.

Israeli and Arab teachers trained together on Democracy and Peace Education

Seminar "Training of Trainers" in Antalya

Between July 1st and July 5th 2007, 44 teachers from Israel, the Palestinian Autonomous Territories and Jordan came together at the "Training of Trainers" workshop in Antalya.

Young Israeli journalists representing the written press as well as radio and TV were invited to a two-day seminar co-organized by the Konrad-Adenauer-Stiftung and Heskem near Jerusalem. During the first part of the workshop prominent speakers gave insights to the possibility of an Israeli-Palestinian peace agreement. The second part was dedicated to the role of the media in shaping the public discourse. 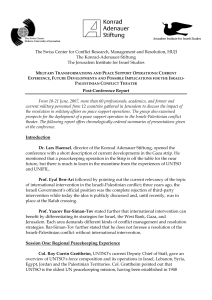 Chances for Peace Keeping Missions in the Middle East?

How to Save the Two State Solution

Southeastern Enlargement of the EU

How the Six-Day War changed the World

KAS and AJC explore political and societal consequences of 1967

Reasons, the order of events as well as political and societal consequences of the Six-Day War were discussed by the Konrad-Adenauer-Stiftung and its partner, the American Jewish Committee, in cooperation with a multitude of experts. During the three-day international conference, possibilities to revive the stagnant peace process were also examined. 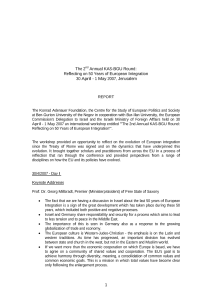 Reflecting on 50 Years of European Integration