The economic working group of the „Strategic Thinking and Analysis Team“ (STAT) discussed economic cooperation between Israel and the Palestinian Territories on Wednesday, May 25. The meeting of Israeli and Palestinian representatives was arranged by the Konrad-Adenauer-Stiftung Jerusalem (KAS) and the Israel/Palestine Center for Research and Information (IPCRI).
May 27, 2011 Ordering Information 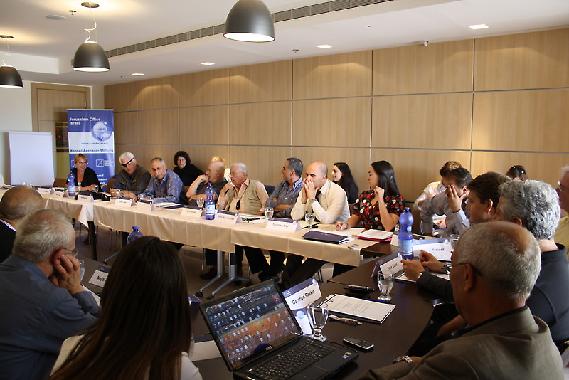 The working group dealt with possible economic changes following the UN membership application planned for September 2011, the reconciliation of the Palestinian Parties Hamas and Fatah and a peace agreement between Israel and the Palestinian Territories. The European Union and the United States were considered as current commercial partners whereas the role of Jordan and Saudi Arabia was examined towards with a view to economic collaboration.

The participants separately analyzed economic conditions and prospective developments of the West Bank and Gaza Strip. Even though the West Bank economy mainly depends on Israel, the water resources in the Jordan Valley and agriculture would give the West Bank a huge potential. In the Gaza Strip, the economy could grow significantly if the Egyptian border were opened for export goods. This would ensure economic independence of private donations from abroad which presently influence the economic activity in the Gaza Strip. Illegal trade through the tunnels controlled by Hamas would then become less important. The conference delegates assumed that a financial reintegration of the Gaza Strip into the Israeli banking sector would attract more investors.

The economic representatives kept quiet about the political course of the Israeli government and the Palestinian National Authority. Therefore, statements on economic development only rely on speculations. How will the Gaza Strip and the West Bank be managed in future? How will the international community, Israel and the private sector respond to the UN membership application? Will the economic development continue its positive trend of recent years?

In the last panel, different scenarios for the economic relations of Israel and the Palestinian Territories were considered. The discussion dealt with the establishment of a full customs union and with the extension of a single market in Israel and the Palestinian Territories, improving the economic integration into European and Middle East markets. In their concluding remarks, Israeli and Palestinian conference delegates emphasized that a stable economic cooperation was only able to develop by respect for legal agreements and permanent, recognized borders.