Jordan in a Changing Regional and International Environment

High-ranking Jordanian former politicians and analysts as well as renowned international experts discuss Jordan's role in the region. This event is organised jointly with Al Quds Center for Political Studies.

The Secretary General of the Jordanian Foreign Ministry discusses with representatives from the UAE and Iran.

In this academy, 8 participants were trained by renowned journalist Aroub Soubh in the art of conducting interviews and using and understanding body language.

KAS Jordan Office, together with Leaders of Tomorrow and SouqFann, is organising a workshop for aspiring entrepreneurs entitled "Introduction to Product Marketing".

This event will be organised together with Al Quds Center for Political Studies.

This workshop will be carried out together with Amman Comedy Club.

Changes in US Jordan Relations

This seminar is organised together with Al Quds Center for Political Studies.

This seminar, targeting political party youth, is organised together with Al Quds Center for Political Studies. 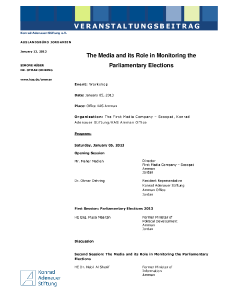 The Media and its Role in Monitoring the Parliamentary Elections

With regard to the parliamentary elections in Jordan on January 23, 2013, KAS Amman and the First Media Company – Scoopat hosted a workshop entitled “The Media and its Role in Monitoring the Parliamentary Elections” on January 05, 2013. Various representatives of the media as well as high ranking politicians and experts participated in the event. The aim was to discuss the role of the media in the electoral process, especially with regard to the amended election law. 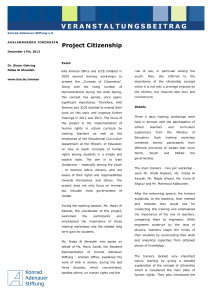 KAS Amman and JCCE co-organized series of workshops about citizenship which is an extension of previous training workshops started in 2009, the focus of the project is the implementation of human rights in school curricula by training teachers as well as the employees of the Educational Curriculum department at the Ministry of Education on how to teach concepts of human rights among students in a simple and explicit style. The training workshop will continue during the years 2012,2013 and 2014. 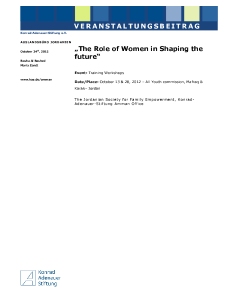 The Role of Women in Shaping the Future

KAS Amman in cooperation with the Jordanian Society for Family Empowerment and All Youth Commission conducted a 1-day training workshop in the Governorates of Mafraq and Karak on October 13th and 20th 2012, entitled 'the role of women in shaping the future'. The main objective of the training workshop was to raise women’s awareness of their constitutional, national, and international rights as well as of the importance of their participation in both political and economic life. 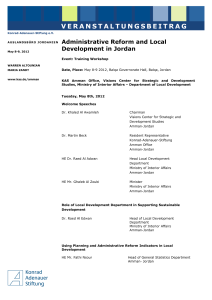 Administrative reform has formed on important part of KAS Amman’s work throughout Jordan. Building on many strong relationships with trainers, decision makers and activists in Jordan, KAS Amman has sought to enrich dialogue in the Balqa Governorate, outside of the capital. As part of a series of decentralization workshops with the Vision Center, KAS Amman supported a two-day governance workshop at the Governorate Hall in Balqa, Jordan. 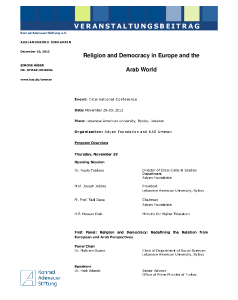 Religion and Democracy in Europe and the Arab World

During the Arab Spring the topic of religion and politics has come increasingly to the forefront of the public debate - regionally as well as internationally. In light of these developments and the ongoing debate Adyan Foundation, Lebanese American University and KAS Amman organized an international conference in Byblos, to discuss the issue of religion and democracy in the Arab World with reference to the European experience and its increasing religious diversity. 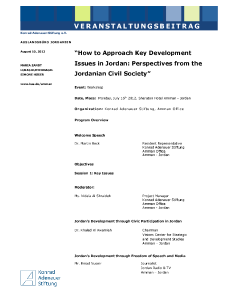 "How to Approach Key Development Issues in Jordan: Perspectives from the Jordanian Civil Society”

On July 16, 2012 KAS Amman organized a one day workshop under the topic: “How to Approach Key Development Issues in Jordan: Perspectives from the Jordanian Civil Society”. The workshop brought together various partner organizations of KAS Amman and offered a room to discuss the development, the achievements and the future of the Civil Society in the Jordanian process of democratization. 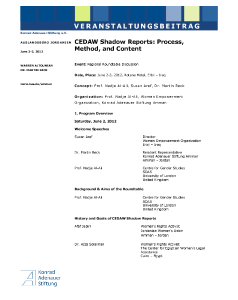 Due to the importance of CEDAW shadow reports as being national and international tools to uncover specific women’s rights violations and forms of gender-based injustice existing in any given national context. KAS Amman and WEO organized a workshop about “Researching & Writing CEDAW Shadow Reports” which brought together both Iraqi civil society activists and academics who are interested in women & gender studies with regional experts in CEDAW shadow report writing. Discussions and case studies showed the challenges the Iraqi Organizations are facing in this field. 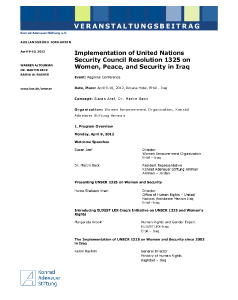 In the year 2000 the UN Security Council passed Resolution 1325 which aims to activate the role of women in conflict resolution and security operations. KAS Amman and the Women Empowerment Organization jointly organized a regional conference on 9th and 10th of April, 2012, in Erbil with various experts, activist, and academics that discussed the resolution, particularly in the context of Iraq. The aim was to develop a network of different organizations that foster the implementation of 1325. 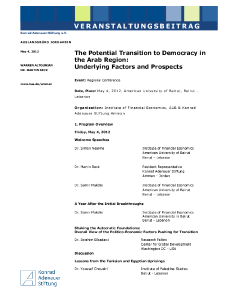 The Potential Transition to Democracy in the Arab Region: Underlying Factors and Prospects

Regional conflicts, extreme economic disparity coupled with political and economic rents; and the lack of a consolidated intellectual movement appear to be the major hindrances to democratic reform in the Arab Spring. On May 04, 2012 the Institute of Financial Economics and KAS Amman organized a conference at the AUB in Beirut with various experts and academics to discuss the political developments. The event provided valuable insight to the likely outcomes in several countries in the region. 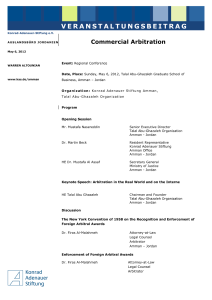 In cooperation with Talal Abu-Ghazaleh Organization, KAS Amman organized a one-day conference on commercial arbitration. Drawing from the expertise and invaluable knowledge of the presenters, the objective of the conference was to promote comprehensive understanding in the use of arbitration for the Jordanian business community.