“DEMOCRACY AND ELECTIONS – HISTORY AND TESTIMONIES”

Under the patronage of the Minister of Political Development in Jordan, Engineer Musa Maaytah, KAS launched its joint publication with the Arab Women Media Center on November 4, 2010, in an event in the Sheraton Hotel Amman at the attendance of important cultural, political and media figures. The book contributes to review the history of elections in Jordan, covers the different election regulations and amendments and carefully examines the new 2010 electoral regulations.
December 13, 2010 Ordering Information

The term democracy refers to a political form of government that guarantees human rights and freedoms for its citizens. Free and fair elections are the foundation upon which democracy is built. In order to improve the conditions for conducting free and fair elections and thus enhancing the confidence in the political and state system, the election law has to provide mechanisms to help prevent manipulation before, during and after the elections by assessing their preparation and conduct. The Jordanian government has recently endorsed by royal decree a temporary election law on May 18, 2010, approximately six months after the dissolution of the 15th Jordanian House of Representatives, in November 2009. The law includes important changes that guarantee more transparency and integrity.

The joint publication of AWMC and KAS “Democracy and Elections – History and testimonies” sheds light on the new election law of 2010 and gives a detailed overview over the history of the elections in Jordan, its laws and amendments as well as other important features of the Jordanian political system. The publication was presented during a book launch ceremony on November 4, 2010, under the patronage of the Minister of Political Development in Jordan, Engineer Musa Maaytah.

KAS launched its joint publication with the Arab Women Media Center on November 4, 2010, in an event in the Sheraton Hotel Amman at the attendance of important cultural, political and media figures.

Mahasen El-Emam, the founder and president of AWMC said in her welcome speech that the center is specialized in media studies, research and consultancy. In addition to these tasks, the center also publishes books dealing with political issues concerning Jordan and the Arab world. She explained that due to the lack of printed publications regarding the elections, the Parliament and its history, the joint publication with KAS highly contributes to the debate on the elections, the electoral process, democracy-building in Jordan and its political system. The book focuses especially on the history of elections in Jordan and gives a useful insight in the electoral regulations in Jordan.

H.E. Engineer Musa Maaytah, stressed the importance of this documenting effort to bring forward an out-standing book which combines history and testimonies that constitute an added value for each effort and theoretical research, that considers man as the essence and purpose of development and the focus of reform and modernization. H.E. Maaytah said: “Democracy is neither a ready-made recipe nor a dress ready to be worn”. He stressed that the opportunity is now available to strengthen and consolidate the democratic experience through elections, since election is the most important pillars of democratic governance, which provides administrative mechanisms and legal basis for citizens’ participation in decision-making.

For his part, Dr. Martin Beck, Resident Representative of the Konrad Adenauer Foundation, said that the book documents very carefully Jordan’s electoral System; it also covers the previous and current discussions regarding elections in Jordan. He expressed the hope that the new election law will ensure fairness and transparency during the upcoming election. Dr. Beck concluded by thanking all who contributed to the completion of the book.

The book with its 228 pages is divided into 11 chapters, i.e. the concept of democracy, democracy and liberalism, constraints of democracy, the Jordanian democratic path, a historical overview over the Jordanian elections and legislatures, parliamentary structures after the declaration of independence, women and parliament, the role of the parliament and the media in empowering women, the Emergence of political parties in Jordan, the development of party life in Jordan and the reality of Jordanian political parties. The book contributes to review the history of elections in Jordan, covers the different election regulations and amendments and carefully examines the new 2010 electoral regulations. 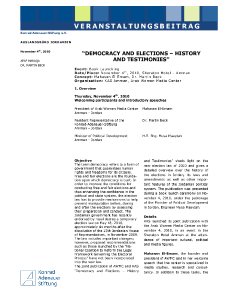