Due to the importance and the crucial role Human Rights education has in the process of achieving a universal culture of human rights, KAS Amman and the Jordanian Centre for Civic Education (JCCE) conducted a specialized regional workshop for a group of University Professors to raise awareness and train them on how to integrate human rights concepts into university curricula. The outcomes of the workshop were highly successful and the concepts achieved will be further promoted.
March 28, 2012 Ordering Information

As part of a series of workshops in cooperation with the Jordanian Center for Civic Education, KAS Amman conducted the four-day workshop in Beirut. The previous meetings had focused on topics pertaining to the mainstreaming of human rights.

Due to the importance of the topic, the JCCE and KAS Amman held the workshop on a regional level, primarily engaging Iraqi activists in addition to those from Lebanon and Jordan. The workshop was attended by experts and stakeholders from the concerned countries and the training was provided by international expert on human rights and citizenship education, Mr. Amara Ben Ramadan.

KAS Amman Resident Representative Dr. Martin Beck inaugurated the workshop with a speech in which he stated the importance of teaching human rights at schools and universities; especially in countries that witness political movements mainly initiated by youth. He noted that while it is agreeable to hold the workshop in Lebanon, it should be an objective of the group to conduct a similar training in Iraq.

Ms. Muna Al Alami, referred to the many objectives realized through the program implemented over the last four years with KAS Amman. The program was implemented in collaboration with school teachers, differing Ministries of Education, and UNRWA through training workshops. Indeed, she stressed, that a better integration of human rights into syllabi has actually started to take place.

Mr. Amara Ben Ramadan introduced the concept of human rights education, and mentioned that it is an evolving and dynamic subject. While it was promoted by around 80-90 organizations in the past, there are now hundreds of them in every city around the world. While in the past, the attitude of such organizations was responsive, confrontational and defensive; now it is proactive and educational.

Mr. Amara Ben Ramadan emphasized the role of higher education institutions in promoting human rights education; since they are intelligence manufacturing institutions that graduate youth well-equipped for the practice of political exercise. He and the participants agreed that human rights issues cannot be exclusive to syllabi and brochures; rather, it is essential to make it a way of living especially in countries where centralization prevails. He opened a discussion diagnosing the state of human rights education at educational systems in Jordan, Lebanon and Iraq and addressed the challenges facing them. The principles of international relations rest on rights-based approaches and are dependent on them. Therefore human rights education also has its impact on promoting international relations.

It was highlighted in the end of the first day that human rights education through schools and universities shall have a cascade effect in its dissemination and will reach out to whole communities.

While the first day focused on introducing theoretical concepts, the second was more geared to practice and interaction. The trainer divided the panel into three state-based working groups.

The first exercise of the groups was to tackle the concept of integrating human rights education into university syllabi. They discussed the concept of integration, such as the challenges facing it and possible solutions. Groups also worked on defining the features of university outputs on characteristic, civil, and practical dimensions. In their discussions they focused on the importance of linking university education outputs with the market needs. They also stressed the importance of education that is based on the exercise of rights and principles, rather than mere recitation of knowledge.

The groups then discussed the nature of national action plans in the field of human rights education and methods of developing them for universities. Mandatory education that integrates human rights issues should be the responsibility of the state, rather than the private sector, in order to ensure access to all, rather than access only for those who can afford it.

On the third day, country-based groups worked together discussing their respective national plans on human rights education at universities and the amendments they propose thereon.

Ms. Muna Al Alami presented on the Jordanian Center for Civic Education and its activities: developing interactive trainings to engage students, teachers, and employees to provide new pilot programs that focus on youth and civic education at schools and universities. Programs and projects implemented by the JCCE mainly focus on linking youth at universities with institutions at the labour market in order to enable youth to acquire the skills they need for work. They also bring youth together so that they can share knowledge skills and experiences.

Country-based groups revisited the action plans of human rights education at the university level. They also presented their reflections on integrating human rights into university education. Furthermore, they worked on a draft plan to train teaching staff on the issue of integrating human rights issues into their university’s curriculum. They discussed mechanisms of the training, sought outputs, activities, methodologies, timeframes, and expected outcomes. As a result, diversified and sometimes contradicting opinions manifested themselves within the same groups. The trainer attempted to reach out to achieve compromise and middle ground between different opinions. But all participants seemed to agree that investing in human resources and their intellectual skills is the sure path to development that will definitely lead to the best outcomes.

Ms. Susan Aref gave a presentation about the Women Empowerment Organization (WEO): a non-governmental CSO that she established in 2004. The organization’s objectives are justice and equality; and while the headquarters is based in Erbil-KRG (Kurdish Regional Government), it operates on the country level in Iraq. It enjoys international partnerships, and its activities are interested in political, legal, social, media, and economic issues. WEO's activities include trainings on leadership skills for women, income generating skills, and life skills for youth. They also promote health education at schools and conduct awareness raising campaigns on issues like breast cancer and other health issues. Furthermore, free legal aid is provided through mobile and fixed legal clinics; and WEO facilitates women’s access for micro financing. Moreover WEO has its own radio that broadcasts information on all implemented activities and that further promotes awareness raising.

The interactive four days that were characterized by hard work, productive sessions, heated discussions, and passionate efforts were concluded by Dr. Martin Beck and Ms. Muna Al Alami. Certificates were distributed to participants, as a way of thanking them for their very active and thorough contributions.

The workshop provided an excellent forum for discussions and deliberations on human rights education at the university level. It articulated the bundled features of a constructive national action plan that aims to integrate human rights concepts into university syllabi. The outcomes sought from such action plans were considered by each country group regarding their country's needs. The workshop showed promise that at its closing; it was only the beginning of promoting concepts achieved. 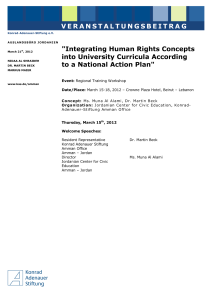