by Dr. Otmar Oehring, Felicitas Weileder
Jordan has experienced a significant rise of societal violence during the last years, which reaches from vandalism over shootings to homicide. In order to face this dangerous grievance, KAS Jordan Office and Action on Societal Violence – KAFA organized a training workshop on 28th September 2013 to discuss the causes of this violence from different perspectives and to develop practical solutions.
March 16, 2014 Ordering Information

on behalf of Dr. Otmar Oehring

Session 4: The Role of the Ministry of Interior in Curbing Societal Violence

Jordan has experienced a significant rise of societal violence during the last years, which reaches from vandalism over shootings to homicide.

In order to face this dangerous grievance, KAS Jordan Office organized a training workshop in cooperation with the Non-Profit-Organization Action on Societal Violence – KAFA which discussed the causes of this violence from different perspectives and subsequently, developed practical solutions.

Ms Lina Abu Nuwar, Director of KAFA, emphasized in her opening speech the rising violence in Jordan which finds its expression in fights, shootings, sexual assault of pupils and students, destruction of public and private property, violence at universities and tribal fights. Statistics from 2011 show the current circulation of around 1 million unlicensed weapons in Jordan.

The rising violence is not just seen in physi-cal violence, but also in verbal disputes and insults, which are especially increasing in the social media.

Consequently, Ms Abu Nuwar asked how this increase of violence could have happened and which share the state, the society and the individual has in it.

On behalf of Dr. Otmar Oehring, Resident Representative of KAS Jordan, Ms Nidaa Al-Shraideh, Project Manager at KAS Jordan, stressed the relevance of the topic and highlighted the importance of the cooperation with KAFA.

The latest rise of violent events in Jordan marks the urgency to discuss both the cau-ses of violence and also possible solutions.

Former Minister of Political Development HE Musa Al Maaitah pointed in his session especially to the socio-economic and political reasons for the increased violence. The growing privatization since the 90s and the related withdrawal of the state is response

ble for the worsening of the economic situa-tion of many Jordanians which leads to an increase in tensions that are not met by the political reforms. A considerable system of nepotism developed instead in which people are trying to solve their problems by them-selves. The development of sub-identities at the tribal, denominational and regional level is further linked to it. For the formation of a pluralistic democracy it is therefore neces-sary to support political parties and opportunities for civil participation.

The Arab Spring is regarding to HE Al Maaitah another reason for the rising violence as individuals expressed their frustration through violence. Hence, HE Al Maaitah demanded political reforms calling citizens to cooperate so that the collective represents again the unity of the social structure.

Dr. Khalid Al-Wazani, Economic Adviser, referred in the following session to the economic situation in Jordan. He highlighted Jordan’s small, stable and open national economy with a very young population. The private economy plays in his opinion a very important role for the development of the country.

According to Dr. Al-Wazani, the fundamental components of the violence are the social injustice of the allocation of income, unemployment, poverty as well as financial and administrative corruption. Even if Jordan has no natural resources, it possesses a high sum of unused human capital, especially through the low contribution of women to the national economy.

Dr. Al-Wazani pled for an expansion and support of education as well as for more transparency, accountability and integrity in order to counteract these fundamental components.

The current situation calls for a mutual effort between the public and the private sector plus institutions of the civil society to induce a value change.

Subsequently, Dr. Jihad Al-Muheisen, Director of the Al-Mashreq Al-Jadeed Re-search Center, spoke about the social per-spective of societal violence. He focused on different scientific definitions of violence, highlighting the current lack of accurate surveys and statistics about violence in the Jordanian society. He further stressed the social, demographic and economic change in Jordan and underlined especially the impact through Iraqi and Syrian refugees on the country; the gap between poor and rich people is constantly increasing.

The absence of social justice leads to a spread of corruption, nepotism and a weak constitutionality.

The main social factors for violence are according to Dr. Al-Muheisen the diffusion of alcohol and drugs, the weakening of the religious faith and the decay of the family. Economic factors are especially unemployment, the instability of prices and the increasing poverty.

In this context, Dr. Al-Muheisen calls for a stronger participation of young people by different political and social activities and projects. Furthermore, he stressed the vital role of educational institutions, which should be strengthened accordingly.

Dr. Safwan Mobideen, in charge of Societal Violence at the Security Affairs Department of the Ministry of Interior, stressed the impact of societal violence on the international positioning of Jordan, especially with regard to tourism and foreign investments.

He sees the phenomenon of violence, which impacts all segments of society, as a natural consequence of the economic developments which are again closely linked with the security und stability of the country. The Ministry of Interior founded several committees to deal appropriately with societal violence.

All in all, the following references can be retained:

•Law reform, especially of the electoral law, for the development of a functioning democracy based on pluralism and political parties

•Building a foundation for transparency, accountability and integrity

•Development of programs for the reduction of poverty

•Implementation of further social studies, e.g. on the impact of the media on societal violence, the role of administrative bodies etc.

•Awareness-raising about the dangers of the abuse of alcohol and drugs, the risk of internet usage etc. through the media

•Programs to support dialog between families and tribes

•Training for teachers and consultants on the issue 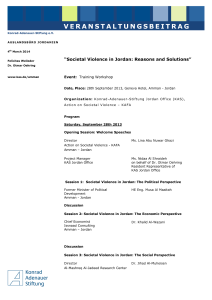