Education as Leverage for Building a Culture of Peace

Professor and Former Minister of Political

Communication between Teachers for Peace Education

Professor and Director of the Center of Linguistics, University of Jordan, Amman

Following many years of peace talks, the

Middle East is still struggling with

conflicts. In order to interrupt the spiral

of violence, it is imperative to establish a

This mutual trust could be build through

civic education which is one of the main

tools in conflict resolution in multi-ethnic

The EU-Partnership for Peace Program

as Leverage for Peace” provided

participants from the educational sector

with information and working material on

educational tools and mechanisms for

from over 15 schools in Palestine, Israel

and Jordan. The EU-project was financed

by the European Commission and

implemented in the period of April 2007

generation of teachers in the Middle East

in implementing concepts of citizenship,

As a follow-up event, KAS Amman in

cooperation with the Amman Center for

Peace and Development organized a

for Building a Culture of Peace” on May

reviving and fostering the introduction of

Furthermore, the participants were

provided with an overview over the

history of democracy in the Middle East

among the local community and with

20 teachers from Jordan who had

participated in the EU program attended

the workshop and were trained on

Democracy Education. The experts and

participants discussed issues such as

equality, tolerance, justice and the rule of

law, pluralism and active citizenship and

their implementation in society. The

participants were also trained in their

communication skills to improve the

the workshop by thanking Konrad-

Adenauer-Stiftung and the teachers who

participated at the workshops held in

Jordan, Israel and Palestine. He pointed

out that Jordan is an example of a

tolerant and peaceful society. Every

citizen, regardless of his racial, religious,

his rights and duties. He added that

without the help of the Konrad-Adenauer-

Stiftung and its offices in the region, the

project could not have been

relevance of cooperation between Palestinians,

Jordanians and Israelis. Even in

there are areas of mutual interest. Certainly,

peace education is among them.

As a reaction to actions of the current Israeli

King Abdallah stated in an interview

given to the Wall Street Journal in early

have reached their “lowest point” since

the peace treaty of 1994. After this interview,

in the face of these regrettable

that the workshop connecting

could be held for the sake of promoting

peace in the region.

Annika Khano, who was the project

manager of the EU project from 2007 to

2009, talked about the outcome of the

workshop series. They were a success in

peace. She then pointed out that one

major aspect of the workshops was to

cope with the fears of cooperation

between Jordanian, Palestinian and

Israeli teachers. She stressed the fact

that KAS is doing its best to bring

together Israelis, Palestinians and

Jordanians for the sake of future

In his introduction to “Civic Education

between the meanings of civic education

studies and civic education. He defined

the civic education studies as a branch of

Political Science which deals with citizens’

affairs, rights and duties and which dated

back to the time of Confucius’ and Plato’s

is rather an educational process designed

to raise awareness and to impart the knowledge on principles of citizenship, civic and political rights.

is a form of governance practiced directly

by the people or through their elected

representatives. Although there is no

definition of democracy, there are two

fundamental principles that must be

included in any definition, namely

equality and freedom: All citizens are

equal before the law and freedom rights

are protected under the Constitution.

Since the two principles are reflected in

the concept of citizenship which is a

social and legal link between citizens and

their democratic society, there are a

number of important responsibilities and

duties, which if shackled would lead to

the obstruction of democracy. The duties

of a responsible citizen include showing

commitment to democracy in word and

deed, obeying the laws passed by

criticism of the political process and civic

life, participating in the development and

improvement of the political process and

civic life, paying taxes and not trying to

evade them, joining military service if

requested and participating in voluntary

The concept of citizenship is the

cornerstone in understanding the

mechanisms of democracy and its work.

Knowledge of theoretical concepts of

democracy is not sufficient; rather one

should gain experience that leads to the

development and refinement of both

“civic disposition” and the necessary

“participatory skills” in order to exercise

the rights and duties associated with

At the end of his contribution, Dr. Al-

and “participatory skills” are necessary to

make citizenship effective in a democratic

society. They could be developed through

students’ participation in the student

Country surveys proved that the

consist of more than three meetings.

Furthermore, the style of teaching or

training should be participatory (groups,

or judicial activities). Effectiveness then

is much higher than lecture-style

dealt with communication skills in

modern and ancient times in addition to

the general objectives of communication

He examined in detail the practical

methods and measures that the

participants studied during the workshop

series of the EU-Partnership for Peace

Program. Dr. Faouri then talked about

the importance of improving communication

skills as a means of expressing

empathy and comprehension of others by

creating an interactive process between

He concluded that the knowledge of how

to communicate and transfer democratic

resolution leads to a higher political

At the end of the workshop, Dr. Al-

and Dr. Martin Beck handed over

certificates of participation to the

Jordanian teachers who participated in

the project during the last 2 years and

The workshop organized by KAS Amman

and the Amman Center for Peace and

follow-up event of a workshop series

within the framework of the EUPartnership

Middle Eastern Civic Education as a

Leverage for Peace”. The participants

were given a further training in teaching

principles of democracy and different

approaches on conflict management. The

Amman and the Amman Center for Peace

and Development organized another

workshop in which the most important

working results were summed up and

emphasized in his presentation the

importance of a true understanding of

both concepts of democracy and

that not only information on the

functioning of a state and one’s duties as

a citizen is important. Communication

skills are also of a major significance to

strengthen peace efforts in the region.

The teachers who participated in this

project will apply in their work what they

have learned during the workshop series.

The workshop will therefore have a major

impact on education in Jordan as it

trained teachers in principles of

democracy and citizenship and in

teaching methods to impart these 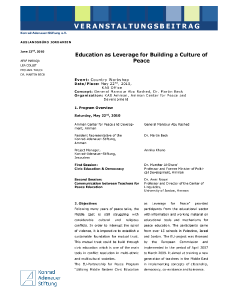 Education as Leverage for Building a Culture of Peace (Pdf)
Download