Book Launch: The Socio-Economic Implications of Syrian Refugees on Jordan - A Cost-Benefit Framework"

With the Syrian conflict entering its fourth year, Jordan increasingly faces the challenge to cope with the influx of Syrian refugees. The need for deeper understanding of the refugee crisis among the public prompted KAS Jordan to examine the socio-economic impacts of the current refugee situation in Jordan more precisely together with Issnaad Consulting.
May 28, 2014 Ordering Information

The Syrian conflict has entered its fourth year with no end in sight to the civil war - the implications of the refugee crisis on Jordan are high. In this context, the importance to assess the socio-economic impact of the refugees on the Jordanian economy from an encompassing point of view gave the incentive for a study written by Dr. Khalid Al Wazani and published by the Konrad-Adenauer-Stiftung Jordan Office and Issnaad Consulting on “The Socio-Economic Implications of Syrian Refugees on Jordan – A Cost-Benefit Framework”. The study aims to address the challenges but also the few chances of the continuous influx of Syrian refugees for the Jordanian economy. The book launch of the study took place on the 20th May 2014. More than 50 participants attended the publication and the following discussion.

Dr. Otmar Oehring, Resident Representative of KAS Jordan Office, welcomed all guests to the publication of the study. He especially thanked Dr. Wazani for the significant research he conducted and his excellent analysis of the data. He further thanked Dr. Wazani’s team, in particular Dr. Ahmad Shaqran, Mrs. Maisoon Amarneh and Mr. Hamzeh Shamayleh, as well as the translator, Mohammad Abu Risha and the designer, Mr. Bader Salman, for their work in this project.

Dr. Wazani introduced his study by outlining the five chapters of the book: 1) Overview of Jordan’s economy before and through the Syrian crisis, 2) overview of the Syrian economy, 3) the development of the Syrian refugee crisis with specific reference to Jordan, 4) the implications of the crisis on host communities in Irbid and Mafraq and 5) a matrix to measure the socio-economic impacts of Syrian refugees on Jordan’s economy.

To begin with, Dr. Wazani highlighted that the economy of Jordan suffered from various economic problems like poverty, unemployment, lack of infrastructure, financial debt and the impacts of the global financial crisis before the start of the Syrian crisis. Jordan has been facing refugee crises since 1929, especially the flow of refugees in 1948 and 1967, which led to an increase of the population of 25 percent, respectively 30 percent, and hence, had a significant impact on the country.

The current number of refugees from Syria is estimated to be one million – of which 600.000 are registered with UNHCR – which accumulates to a population increase of 13 percent. 80 percent of them do not live in the refugee camps but in the various governorates, especially in the Northern area of Jordan. Especially Irbid and Marfaq which are hosting the highest number of refugees are tremendously affected by the influx. The Jordanian government however, lacks to provide the communities with sufficient aid.

One of the main impacts is the additional labor force the refugees are bringing to the Jordanian labor market as 82 percent of the refugees are under the age of 35 and are, thus, competing with Jordanian as well as migrant workers for jobs. Furthermore, the influx of refugees also creates social prob-lems like child labor, a lack of affordable housing for Jordanians and increasing criminality as well as structural problems due to the burden on resources such as water and electricity.

Dr. Wazani calculated the aggregated costs for the Jordanian economy between 4.2 billion JOD and 5.1 billion JOD for the time from 2011 until 2014. These costs account for at least 20 percent of the Jordanian GDP. At the same time, Jordan has also received benefits trough the arrival of refugees due to their consumption as well as foreign aid and investments. However, after outweigh-ing the cost and benefits of the refugee crisis, Dr. Wazani came to the conclusion that the costs outweigh the benefits by 1.7 billion JOD.

Dr. Al Wazani as well as participants stressed, that the Syrian crisis will continue for a number of years and will thus, con-tinue to pose a huge burden for the Jordanian country. Other participants mentioned that the study is missing the social costs of the influx of refugees as well as the environmental costs, especially as the refugee camp Za’atari is polluting one of the most important ground water bases. Dr. Al Wazani concluded by stressing on Jordan’s tremendous knowledge on dealing with refugee crises which it could share with countries facing similar problems.

The full study can be found under the following link. 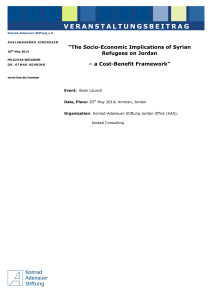