Building a Municipality: How to assure

participation of men and women alike in Local

The role of private sector in local development

The Monitor of the Central Authority over Local Councils

Role of Civic Society in Local Development Progress in Jordan

With the first competitive elections in 1989

for enhancing the political participation,

which is a substantial component of a functioning

initiated the first measures to improve the

political, social and economic framework on

the way of fair political participation. He

therefore founded a royal commission in

2005 to work out a decentralization plan for

enhancing the political participation of citizens

on the local community level, thereby

creating an open, transparent and citizenfriendly

bureaucracy to the governorate and

community level. Though it may be the

main objective of the regime to stabilize the

citizens should take the government by its

word and should seize the chance of widening

the civic participation. During the workshop

on May 26th, organized by KAS Amman

and the Visions Center for Strategic and

in Irbid, participants and experts exchanged

ideas and opinions on local development.

The topics discussed covered, among others,

the fair representation of men and

women on the local level, the role of the

private sector and of population in local development,

the decentralisation project of

role in the process of decentralisation.

Center, opened the workshop. In his

welcoming speech he talked about the key

role of the university in the field of regional

and local development. The mission of the

university should not only be to produce

new knowledge, impart and apply it, but

also to promote human resources as the

basis of social development. The training of

stakeholders and experts in economy, politics

of the Konrad-Adenauer-Stiftung in Amman,

pointed out that the workshop can be traced

back to the promising initiative of King Abdullah

II to decentralize the political decision-

However, this decentralization process

should further enhance the capacities of

municipalities and strengthen the participation

on the local level. The government

getting the opportunity to take part in

the decision-making processes and to implement

their interests on the local level.

Hence, the government has to provide the

municipalities and governorates with the

that the KAS-Visions Center workshop is

particularly important as it is the first coordinated

effort between the government,

represented by the directory of the local development

at the ministry of interior, municipalities,

higher education and advocacy groups to

and civic participation in governorates and

Dr. Al-Adwan stressed in his welcoming

statement the essential role of decentralisation

as the most important component in

public and private sector is an important

prerequisite for the implementation of the

order to achieve efficient and sustainable

local development, the administration has

to take measures of political and social restructuring.

In this way the democratic

structure of the government and the administration

and a modern infrastructure

presented different aspects of the

concept of local development. While the

concept of development was first understood

as economic development only, today

the developmental approaches and initiatives

is very important to establish institutional

especially regarding the 21st century’s

challenges and the technological,

processes that take place under the influence

of globalisation. To conclude, he highlighted

the growing importance of the university

in the cooperation between government,

pointed at the social and economic

cleavages between the twelve governorates

in Jordan. Nevertheless, he stated that the

government’s decentralisation plan is a first

important step towards a cultural, economic

and social basis for effective, democratic

governance. Moreover, it could bridge socioeconomical

and an engaged and organised civic society.

Dr. Al-Adwan presented in his lecture on

the decentralization plan of the government.

been working on compiling the financial,

for the implementation of the decentralization

delegation of power, capacities and resources

on the governmental and communal

The capabilities and financial means of the

12 governorates have to be strengthened in

such a way as to enable the civil society to

participate in the political life of the state at

all levels. Yet, the huge socioeconomic gap

between the rural and urban population

shows that the decisions of the government

do not always reflect the needs and priorities

in local communities. She stated that there

are differences between traditional forms of

political representation such as in presidential

or parliamentarian systems of government

and new forms of participation. She

then focused on participation of men and

women in local elections and their representation

in local institutions. Regarding the

passive vote, there are nearly no differences

between men and women; both sexes

are affected by a significant decline of participation

in elections and in political interest

in Germany. In comparison to France,

where there is a balanced representation of

men and women in local councils and high

in Germany. In the following,

the form of election law. Contrary to the

Besides, quotas in political parties

should secure career opportunities for

of men and women prevails in local political

equal representation of man and women in

competition, strategies of parties and social

of women and new forms of grassroots democracy

on the local and national level.

Dr. Al-Wazzani focused in his lecture on

the concept of corporate social responsibility.

This concept assumes that the capacity

and overall performance of a company can

be enhanced by taking social responsibility.

Through social, ecological and economic

contributions that go beyond legal obligations

of the government, companies can increase

provide part of the budget for developmental

services through cooperation with the public

sector, contribute to research and support

Local development therefore is not

only a central task of government, but also

becomes a paramount mission of the private

In the subsequent discussion, the question

came up, whether the companies’ social expenses

should be paid into a governmental

fund so that their use could be better controlled.

In this context, Dr. Al-Wazzani pointed out

that laws for a better allocation of social expenses

of companies could be a useful

steering instrument. Governorates have to

steer and observe the allocation.

Dr. Al-Shraideh began his speech with a

comparison of centralism and decentralisation.

While centralism means that all competences

in a state are concentrated in one

refers to political reforms which aim at

functions to the regional and local level of

administration. In this way, participation of

the population in all relevant aspects is encouraged.

administrative tasks are delegated to

the regional level, which is in charge with

the implementation, while the decisionmaking

power stays with the ministries at

Dr. Al-Shraideh then discussed the role of

municipal councils and their power. It is important

that, in the context of decentralisation

mechanisms and checks and balances between

the different levels allow for accountability

role in local development and the obstacles

the political decision-making process on the

criteria, like democratic government structures that have to be met by government to

create mechanisms of civic participation and

to promote local development. The problem

in Jordan is that civic society organisations

are often seen as a threat to the political

these organisations play an important role

in local development as they defend citizen

rights and articulate the needs of the people.

Yet, the general performance of civic

society organisations in the Middle East is

not sufficient to effectively work together

with government and citizens.

At the end of the workshop, Dr. Beck

stressed that the Jordanian governorates

support from the central government.

Dr. Al-Adwan explained that the results of

the workshop and the feed back on the

be communicated to the Ministry of Interior.

Finally, Dr. Al-Wazzani asserted that the

private sector has to play an even more important

role in local development and that

the allocation of companies’ social expenses

has to be observed by the government.

As a first coordinated effort between the

government, represented by the directory of

the local development at the ministry of interior,

the joint workshop of the Konrad-Adenauer-

Stiftung and the Visions Center for Strategic

and Development Studies on civic participation

and local development has paved the

way for future discussions on decentralization.

The participation of the governor of Irbid,

Khaled Abu Zeid, as well as of other highranking

experts, showed the importance of

civic participation and decentralisation. The

workshop fulfilled the function of bringing

together experts from different areas who

Especially the contribution of Dr. Reiter on

equal representation of men and women

provided the audience with a new perspective

of gender issues and equality in political

The feedback on the workshop was very

positive. Many participants used the opportunity

of a free exchange of opinions on

problems that have not been discussed in

Jordan so far, to have their say on important

issues such as the role of local communities

in the government’s decentralization 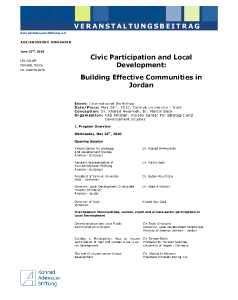