The Jordanian Electoral Law and International and National Standards

Second Session: The Electoral Law and the Public Debate in Jordan – The Parliament we want

Third Session: Quota in Electoral Laws: Ensuring the Representation of Women and Minorities in an Appropriate Way

Fourth Session: Have the Electoral Laws Helped in the Development of the Political Parties in Jordan?

In November 2009, King Abdullah dissolved the Jordanian parliament. A transitional government under Samir Rifai was appointed to create a new electoral law for the elections that are to be held in late autumn 2010. On June 8th, 2010 the government of Jordan announced the new law. Among the substantial modifications of the law are an increase of the overall seats of parliament from 110 to 120 and an increase of the women’s quota from 6 to 12 seats. Yet, there are many regulations that need to be clarified and discussed. On June 12th, 2010 the Amman Office of Konrad-Adenauer-Stiftung organised in cooperation with Al-Quds Center for Political Studies a workshop to discuss the new law. The core questions guiding this event were whether the Jordanian electoral law meets international and also regional standards and expectations and where it can be ranked among others. Therefore, the workshop was organised to shed light on different aspects of the electoral law and process. Especially the public debate on the law, the regulations on quotas, the development of political parties and international monitoring were dealt with in depth. The speakers were partly Jordanian and partly international experts that could also review the new regulations from an outside perspective.

Dr. Martin Beck, Resident Representative of Konrad-Adenauer-Stiftung in Amman, underlined the significance of the issue by reminding of Jordan’s downgrading from a partly democratic to a non-democratic country by Freedom House. The decision of Freedom House was mainly a result of the dissolution of the parliament and the postponement of reelections for one year. Dr. Beck said that everybody was excited about the new law and about the differences that were drawn to the previous laws. He mentioned that Europeans very much believe in the ability of political parties to aggregate interests and concepts for problem solving. Thus, the question is whether this concept will play a major role in Jordan, too. Yet, does the new law promote political parties in Jordan? Moreover, the new electoral law appears to be very complicated. Therefore, Dr. Beck was looking forward to the experts’ contributions.

The first session of the workshop was opened by Dr. Toni Georges Atallah. He first of all stated that there are no procedural studies done in respect to elections. Every electoral system might produce experts that win the elections not because of their popularity but because of their experience with the system. For every society, a process of steady gradual reform is therefore very useful. In the following Dr. Atallah examined the Jordanian electoral law according to international standards. The new law was issued less than six months before the elections and leaves therefore little time for preparation for all stakeholders.

A system of proportional representation or a mixed system would be far better than the actual system that does not provide for equal opportunities for voters. Another critical point is that the districts that are created for the election are not clearly identified in the law. Election dates should not be postponed by the government and there should be a sufficient period of time to review the different candidates. In Lebanon, this is one month.

Additionally, voting lists should be open to facilitate the accession for new candidates. The finances of candidates should be transparent to prevent buying of votes. Media also play an important role, especially if they are publicly owned. Freedom of information should be guaranteed and monitoring is very important, too. But it should be carried out by independent institutions and not only by the Ministry of Interior.

Considering the voting as such, special voting cards showing the photo of the candidate and its name would be preferable in a society with a considerable amount of illiterate voters. The following discussion centred on the question which countries implemented all of these requirements and what extent of compliance to them is needed. Another question was whether the newly introduced virtual districts solved the problems of the “one man, one vote” system.

In the second session, Dr. Mohammad Al-Masri was the first speaker. From his point of view, political reforms should be based on a bottom-up process. Furthermore, the government should be elected by the parliament. He mentioned that only ten per cent of the Jordanian people are aware of the fact that the parliament should control the government. The other 90 percent see the parliament more as a pressure group. Most MPs therefore only want to achieve services from government and accordingly there is barely any discussion on important issues. Voters should feel that they elect people that have to be held accountable. In the end, the new electoral law is not very different from the 1993 law.

Dr. Ali Al-Dabbas stressed that democracy is based on freedoms, including the one to revise the electoral process. Therefore, the role of civil society should be activated. On the part of the National Center for Human Rights (NCHR) there have been many discussions with representatives of the civil society from the governorates that led to recommendations on how to improve the electoral law. These recommendations were presented to the government. Unfortunately, only 11 per cent of them were accepted, and these were rather the less important suggestions. Especially the situation for the illiterate has not been improved.

Oraib Rantawi said that on the one hand, there is a national consensus that rejects the “one man, one vote” system. On the other hand, Jordanians like to have personal bindings with their members of parliament. A mixed voting system might provide the best solution to these problems. It would combine personal relations and at the same time avoid the problems of the “one man, one vote” system. The new electoral law, however, does not support the creation of one national identity. Rather, it promotes different sub-identities.

In the discussion of this session, there were comments that with the new electoral law, Jordan is moving backwards by supporting tribalism and sectionalism. Moreover, the women quota should provide access for better qualified women than it actually does. There was also sorrow about the fact that there is complete ignorance about elections among the youth and that political parties do not engage in educating people although they want to have more money from the state.

In the third session of the day, Dr. Ibtisam Atiat stated that since 1989, when women’s organisations started to ask for more representation, there has been a process of feminisation of public life in Jordan. Considering a women’s quota, there are two options. Either one can enforce a quota by law, as in Jordan, or one can establish a voluntary quota, as in Sweden. However, it took the Swedish 60 years to get a voluntary quota. So the question Dr. Atiat asked is whether Jordan should also wait for 60 years until arriving at a voluntary quota. Rather, Jordan should take an approach of “affirmative action” to compensate the imbalances between men and women. According to Dr. Atiat, to really have an impact on politics women’s repre-sentation has to reach a critical mass of at least 25 per cent. Moreover, one has to differentiate between the general representa-tion of women and special interests or geo-graphical groups of women. This is a reason why the women of Amman were somehow disappointed by the quota because the electoral law favours women from rural areas.

Hussein Abu Rumman explained that there are two types of quotas. On the one hand, there are minorities’ quotas like those for Christians, Bedouins, Circassians and Chechens. On the other hand, there is the quota for women. The women’s quota is an open quota which means that they are not prevented from gaining more seats than the quota guarantees. In fact, there is no other solution for representation than the actual quota, but there should not be geographical limits to a woman’s candidature.

In the fourth session, HE Dr. Ameen Mshaqbeh talked on the impact of the electoral law on political parties. In his point of view, the Jordanian electoral law does not promote political parties, which has major impacts on the party system. There are actually 17 different parties in Jordan, but no party system. A functioning party system requires that the society and the political system accept political parties as organisations to aggregate interests of the community. Moreover, a party must take a bottom-up way, which means that it will develop among the people, then be elected into parliament and finally be part of the government. Yet, in Jordan, political parties are deteriorating because of different reasons: a low level of institutionalisation of parties, plus legal, cultural and ideological hindrances. The impact of the new electoral law will be a strengthening of tribalism and lower rates of representation.

The following discussion centred on the question whether the focus of the women’s quota should be more on qualitative or quantitative representation. Other questions were why women don’t vote for women and whether the quota might be unconstitu-tional. Mr. Abu Rumman commented that the women’s quota could produce a completely different parliamentary performance, e.g. when women defend women’s rights. Also, women get votes from women, because otherwise they wouldn’t have been elected.

Saád Shehab mentioned that the constitution allows every candidate to monitor the election process, either on his own or by an agent (Art. 28). The counting of the votes takes place at the same place as the casting of ballots. Furthermore, the law prescribes who is allowed to observe the ballot room. The problem of international monitors is that their reports are not binding for any government and therefore their impact might be limited. Concerning transparency, the nomination process will begin 30 days before the ballot day and ballot stations will be published seven days before in newspapers and on the ministry’s homepage. Besides, an ID card indicating the voting district is required for voting.

During the discussion, it was mentioned that there will be 4500 ballot stations, but only 1200 NCHR-observers. Concerning national sovereignty, Oraib Rantawi said that international observers, by monitoring US elections, do not undermine US sovereignty. At least, there should be internationa l observers from those countries that on their part hosted Jordanian observers. Furthermore, there were questions concerning the government’s role in enforcement of fair elections. Dr. Taleb Awad commented that it is impossible for one single organisation to monitor the whole electoral process.

The workshop covered an issue that is very important for the future of Jordan’s democracy. Many insightful speeches of high-ranking and approved experts in the field of electoral law offered different perspectives on the subject. It was a unique chance for the auditorium to have an international board of speakers of governmental and non-governmental organisations as well as from the epistemic community. Also the presence of many societal organisations and party leaders, former Members of Parliament and other important figures showed that the issue is very important and the event took place at the right moment. Bringing together stakeholders, academic experts and government officials, this workshop was a significant contribution to the national discussion and will have an impact on the future legislation. The very open, profound and controversial discussions after the presentations were also an indicator that the workshop met the expectations and initiated exchange between different social groups and representatives of the government. 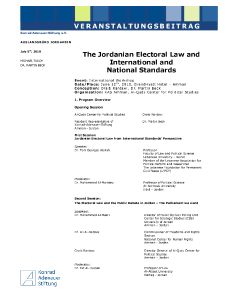