On January 25th, 2012, Talal Abu Ghazaleh Organization and Konrad Adenauer Stiftung Amman organized an event in order to celebrate the launch of a new book published by the two organizations. The book has the title: “Jordan’s New Draft Competition Law: Achievement Made, Improvement Required.” and it is giving insights why competition laws are crucial to economic development and countering corruptive practices. In addition to Dr. Martin Beck and Mr. Mustafa Nasereddin, also Mr. Hussein Al-Hamadani, Director of Competition Directorate, spoke on the event.
March 1, 2012 Ordering Information

Minister of Industry and Trade

Under the patronage of the Minister of Industry and Trade, HE Mr. Sami Gammoh, Talal Abu Ghazaleh Organization and Konrad Adenauer Stiftung Amman launched a book entitled “Jordan’s New Draft Competition Law: Achievement Made, Improvement Required.” The compilation of essays and analyses is based on the workshop “National Strategy towards a Modern Competition Law for Jordan,” held in Amman, September 2010. The publication is the result of dedicated work and in-depth research by its contributors.

Mr. Mustafa Nasereddin, Executive Director of Talal Abu Ghazaleh Organization, commended the partnership between TAGI and KAS Amman. He stated that the book is the fruit of sustained cooperation during the past two years which aimed to advance the competition laws in Jordan. Given the importance of these working papers, it was necessary for them to be compiled under this publication – especially due to the scarcity of such books in the Arab world. He referred to it as a documentary of the hard work and long hours of its contributors. Mr. Nasereddin closed by noting Jordan’s role as an industrious and innovative nation in the region. It is TAGI’s goal to become more involved in crafting effective economic policies that set an example for the rest of the Arab world.

Dr. Martin Beck, Resident Representative of KAS Amman, highlighted the positive steps the Jordanian government has made in improving the business environment in Jordan. He commended the launch of the Competition Directorate – part of the Ministry of Industry and Trade – and pointed to several of its accomplishments since its establishment. Dr. Beck continued by impressing upon the audience the urgency for Jordan to entice domestic and foreign investment; something that can be accomplished through implementation of laws which protect competitive business practices. He called for all those concerned with producing a better competition law to become involved in the process by exchanging ideas and expertise.

On behalf of the Minister of Industry and Trade, Mr. Hussein Al-Hamadani, Director of Competition Directorate, expressed his gratitude to TAGI and KAS for their publication improving Jordan’s competition law. He stated the Ministry’s interest in partnering with the private sector to craft laws and regulations. Mr. Al-Hamadani further commented on the role of the Competition Directorate as one of consumer protection, market regulation, and training of officials and judges on these matters.

Inside you will find the reasons why competition laws are crucial to economic development and countering corruptive practices. The book outlines the formation of the Competition Directorate and its responsibilities as a governing body.

It also explains the role it takes in protecting competitive business culture while preventing abuse of market dominance.

The book contains an overview of the competition law itself with historical perspective and a forthright explanation of the legal stipulations within.

It includes a comparison of competition laws in the Arab world with that of Jordan – clarifying the need for implementation of such laws and their adherence to international standards.

Throughout the book, many recommendations to update the eight year old law are made by its contributors. The book is relevant to anyone interested in competition law, legal processes, and understanding economic issues. 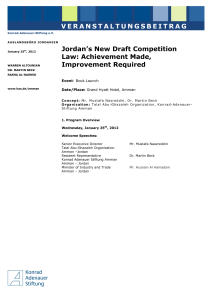