The Konrad Adenauer Stiftung(KAS Amman) in cooperation with the Regional Center on Conflict Prevention (RCCP) co-organized a series of four workshops in 2008 and 2009 at the Jordanian Institute for Diplomacy targeted at a variety of actors including Jordanian NGOs, researchers and public sector employees, to provide participants with a basic framework of conflict prevention and conflict mapping.
October 4, 2009 Ordering Information

The second training workshop aimed at enhancing the participant’s analytical skills to study the origins and causes of conflict. During a group exercise the participants were familiarized with various theoretical cases where conflict could arise. In order to bridge the gap between the academic and the practical experience of conflict, the participants were asked to come up with means by which to teach conflict prevention methods to others. The second part of the workshop dealt with the possibilities of civil society and NGO intervention in conflicts.

The third workshop, which took place in autumn 2008, was related to the discussion of the case studies the participants were asked for. The local case studies which will be used in the manual on conflict prevention were evaluated and finalized.

The focus of the last workshop of October 4th, 2009, lied on the final discussions about the “Manual for Conflict Prevention: Enhancing Civil Society’s Interventions”. This manual addresses the staff of all NGOs and community-based organizations throughout the Middle East. It is the result of a collective effort of an advisory team of NGO, KAS and RCCP staff and it attempts to provide methods and information on how to manage and transform conflict. It will offer tools for evaluating conflict, ideas on how to intervene in conflict and will present some interesting case studies of intervention in Jordan. 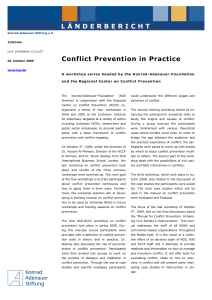