Merkel's Dilemma – Refugees and the Rise of the European Populists

AN EXPERT DIALOGUE ON THE SOCIO-POLITICAL CHALLENGES OF MIGRATION

The Regional Office Gulf States and the Jordan Office jointly organised an expert talk with TV presenter and journalist Mr Ali Aslan on Germany's refugee policy, the rise of European populist parties and the future of the European Union.
December 8, 2016 Ordering Information 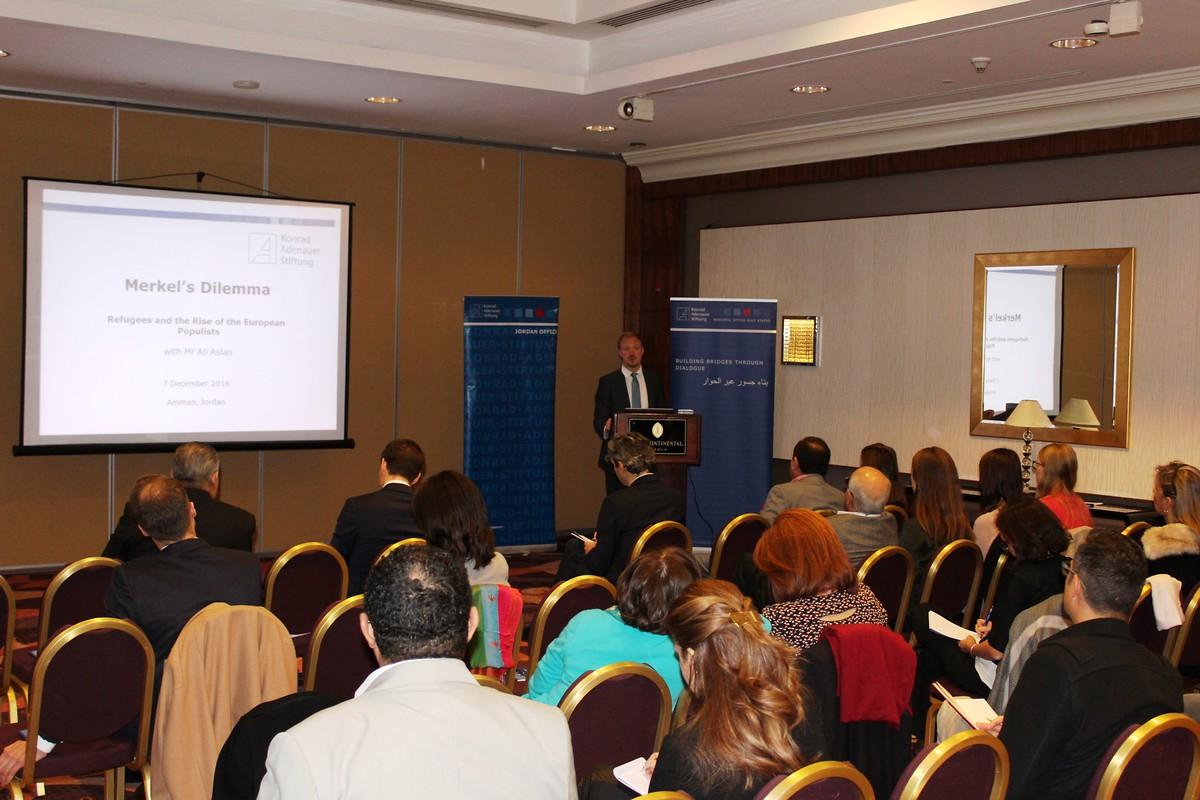 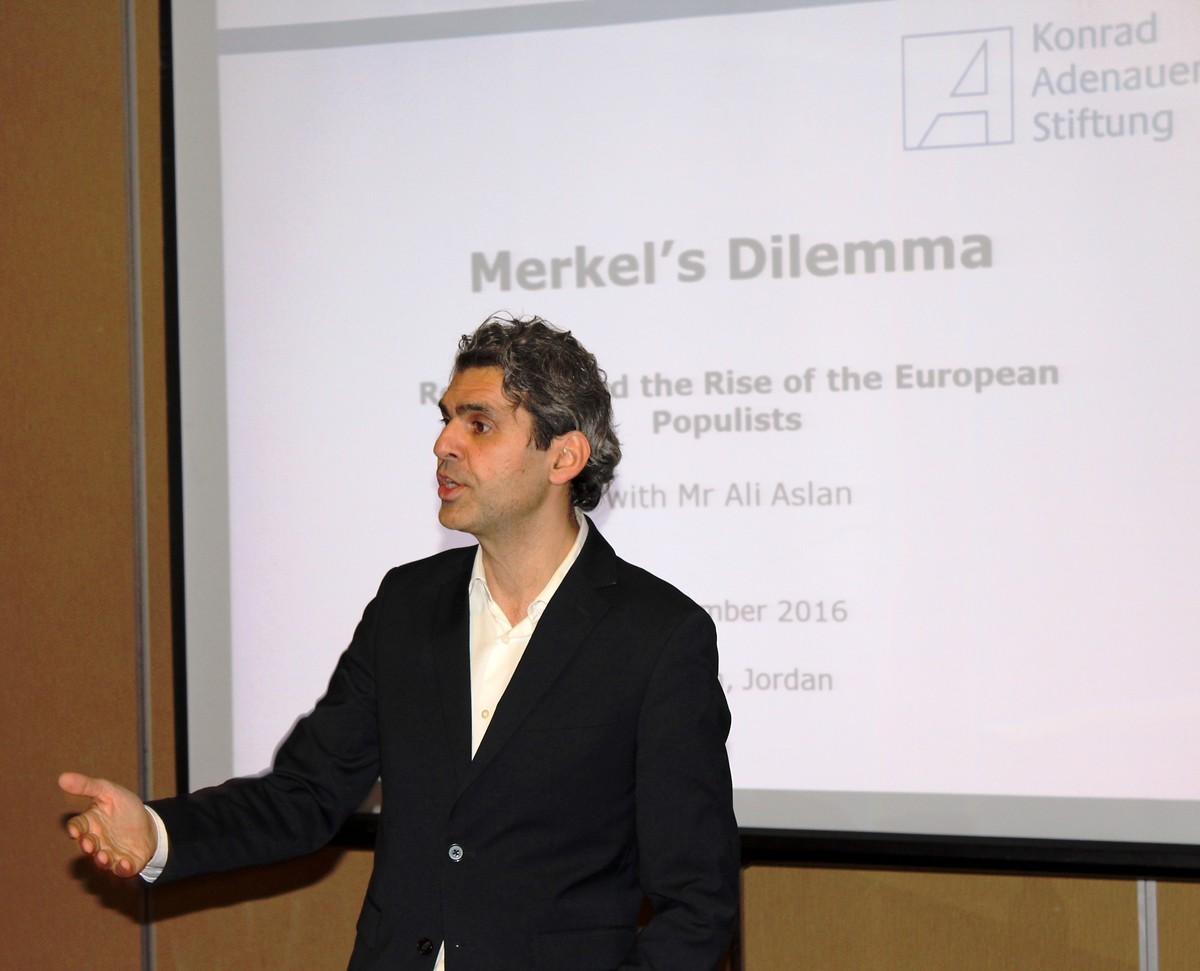 KAS_RPG
Mr Ali Aslan, TV presenter and journalist, presents the media's view on the link between Germany's refugee policy and the rise of populist parties. 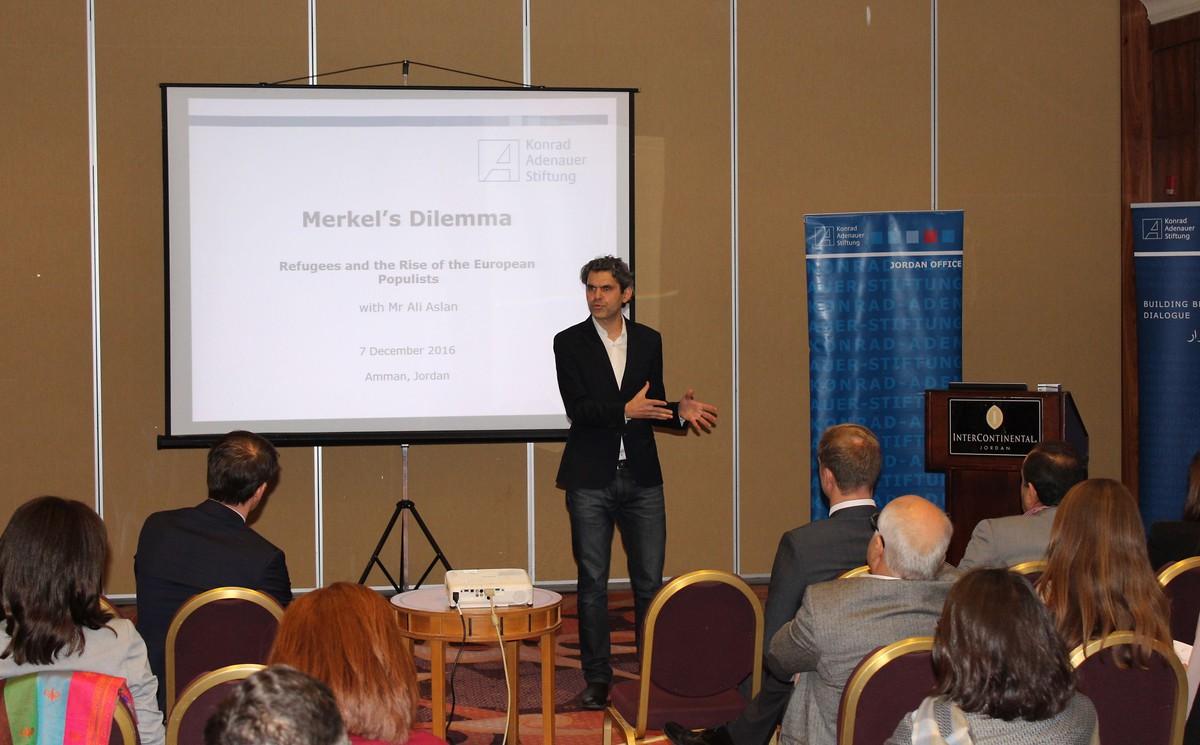 KAS_RPG
Mr Aslan discusses possible reasons for the increasing hostility vis-à-vis established media that is spreading among parts of the German society. 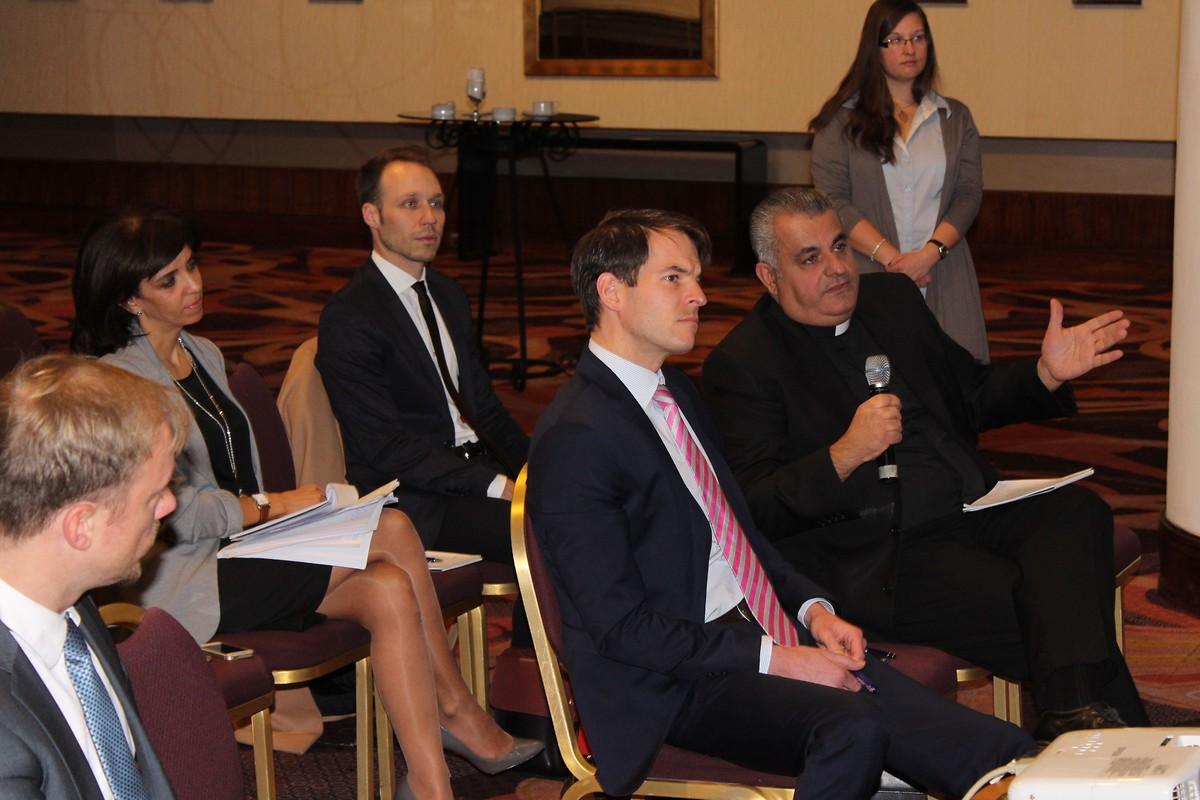 KAS_RPG
Father Rifat Bader, General Director of the Catholic Center for Studies and Media, exchanges views with Mr Aslan on the challenges of migration for Germany and the Middle East. 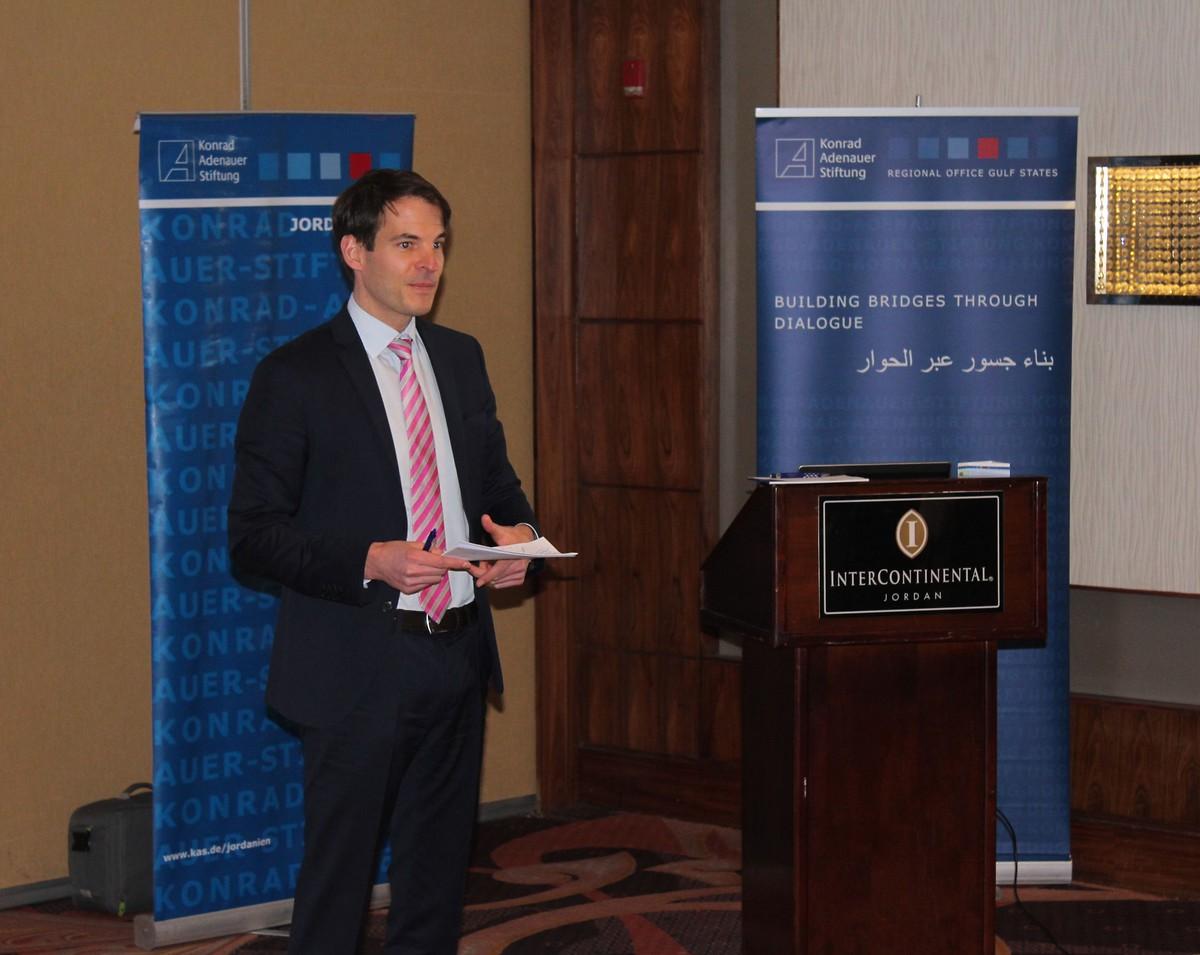 KAS_RPG
Dr Manuel Schubert, Resident Representative Jordan, presents his concluding remarks and thanks Mr Aslan and the audience for the insightful discussion. 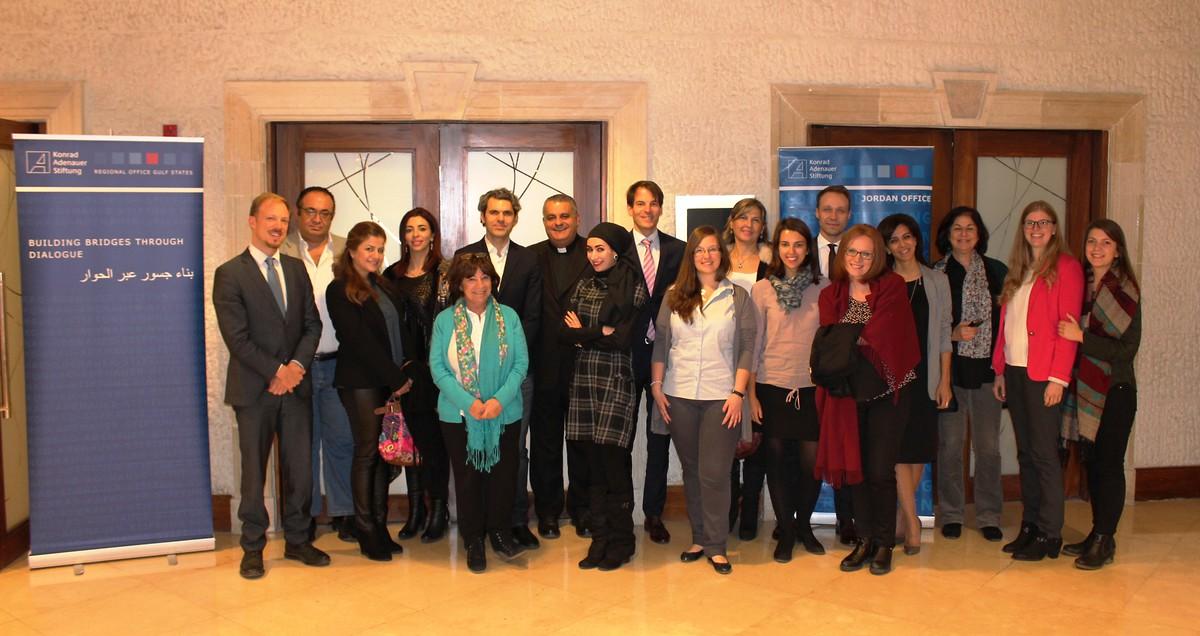 KAS_RPG
The participants and organisers of the expert talk "Merkel‘s Dilemma – Refugees and the Rise of the European Populists" with Mr Aslan.

In an engaging talk, which took place in Amman on 7 December 2016, with representatives from UNHCR, various humanitarian organisations, the church as well as journalists, Mr Ali Aslan explained the link between Germany's refugee policy and the rise of populist parties from the perspective of the German media and described its ramifications for the future of the European Union (EU) as well as Germany's and Europe's relations with the Middle East.

A seasoned TV presenter and journalist, Mr Aslan has worked for CNN, ABC News, Channel News Asia and Deutsche Welle, where he hosted the international talk show “Quadriga”. Mr Aslan has also served as a Policy and Media Advisor to the German government, including the Foreign Office, for which he has intensively researched and engaged with the consequences of the refugee crisis in Europe.

Against the background of the impending Brexit and the rising number of populist parties that are currently gaining influence in Europe, Mr Aslan's talk revolved around inner-European tensions and disagreements based on Europe's refugee and migration policy. In this respect, Mr Aslan also shared his personal experiences as a journalist and discussed the increasing hostility vis-à-vis established media that is spreading among parts of the German population.

Moreover, Mr Aslan reviewed different causes for the increasing approval of populist parties in Europe as well as possible reasons for conflicting views regarding the admission of refugees in Germany. A central question was hence how the EU can deal with the influx of refugees in accordance with European values, while at the same time containing the rise of populist parties. Mr Aslan emphasized that a dialogue on equal terms and an open exchange of views between the various societal segments in Germany but also within Europe are invaluable for finding solutions. In this context, Mr Aslan and the participants also reflected on Germany's reluctant, yet increasing leadership role in the EU and its significance for the future unity of the Union.

In his illuminating talk, Mr Aslan also highlighted Jordan's extraordinary accomplishments taking in refugees from the region and pointed out that this contribution is often not fully acknowledged on the international level. The influx of such a considerable number of people is always a serious challenge for social and economic integration, even in socially, religiously and culturally similar countries like Jordan. Therefore, close interregional cooperation and continuous talks are necessary to design constructive measures for the effective admission and successful integration of refugees and migrants.

Following the expert talk, the audience engaged in a lively exchange of ideas, which emphasised the topic's importance for Germany's and Europe's political affairs as well as its relations with the Middle East. Furthermore, the debate underlined the audience's interest in an open dialogue and the common concern to find a shared solution. 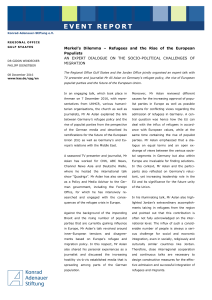 Merkel's Dilemma – Refugees and the Rise of the European Populists