Security challenges in the Middle East

On 30 March 2017, the Royal Jordanian National Defense College (RJNDC) visited the headquarters of Konrad-Adenauer-Foundation in Berlin, as part of a visiting programme to Germany in the context of their Officers’ training in cooperation with the German Federal Ministry of Defence.
March 30, 2017 Ordering Information

The RJNDC is the central training institution and advisory body for the Jordanian Military. After an introduction to the Foundation, its mission, and its projects in the Middle East, the discussion focused on issues of regional security. Once again, Jordan’s key role as a stabiliser and partner in the struggle against terrorism became apparent. Amongst other things, the Jordanians also stressed the risk of a spill-over of terrorist groups from Syria to Jordan. In addition, the head of the delegation, General Dr Youssef Al Khatib, emphasised the effective German-Jordanian cooperation in the field of border security. At the same time, he highlighted the relevance of civilian support and the importance of advice on political and especially economic reform processes in Jordan, as provided by Konrad-Adenauer-Foundation. 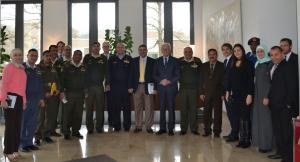