by Simone Hüser, Otmar Oehring
Since the beginning of the Syrian civil war Jordan has opened its borders to approximately 600.000 refugees which has had a tremendous impact on Jordan’s infrastructure, resources, and the labor market. Issnaad Consulting and KAS organized a workshop on 18th February 2014 to present the preliminary results of a study on the socio-economic implications of the Syrian refugees on the Jordanian economy and to further discuss the impacts in practice with national and international representatives.
March 9, 2014 Ordering Information

The Syrian civil war has become highly complex in terms of players, level of violence, and detained persons. Jordan has opened its borders to about 600.000 refugees since March 2011; the unofficial numbers are even higher. However, with a total population of 6.3 million an increase of 10 percent has a tremendous impact on Jordan’s infrastructure, its resources, the education and health system, and the labour market.

In this framework, Issnaad Consulting and Konrad-Adenauer-Stiftung Jordan Office (KAS) are conducting a study on the socio-economic implications of the Syrian refugees on the Jordanian economy. The study is aimed at guiding national as well as international actors through the various impacts of the crisis and to help the Jordanian state to balance, or even prevent some of the negative consequences of the influx.

On 18th February 2014 Issnaad Consulting and KAS organized a workshop to present the preliminary results of the study and to further discuss the impacts in practice with national and international representatives. The final study, written by Dr. Khalid Al Wazani, will be published in April 2014.

At the beginning of the workshop Dr. Otmar Oehring, Resident Representative of KAS Jordan Office, and Dr. Khalid Al Wazani, author of the study and CEO – Chairman of Issnaad Consulting, expressed the importance of the study and their gratitude towards the local communities carrying the main burden of the refugee crisis.

At the beginning of his presentation Dr. Wazani emphasized that the Jordanian economy has been in a severe crisis since 2008. The budget deficit for example accounts for 13 percent of the GDP and the average growth rate decreased from 4.95 percent in 2008-2010 to 2.7 percent in 2012.

The continuous influx of Syrian refugees into Jordan further deepens this deficit and thus, has a significant negative impact on the Jordanian economy. While 600.000 refugees are registered with UNHCR the total number is supposed to account for 800.000 as many of the refugees are not officially registered due to various reasons. As a result, the population growth in Jordan accumulates to 2.2 percent.

Dr. Wazani elaborated on the main difficulties for the country’s infrastructure resulting from the refugee influx which are as followed:

-Lack of solid waste management and pollution due to a significantly bigger population (in the gover-norate Mafraq, for instance, the population almost tripled while the infrastructure has not been ex-panded

While the influx has a significant negative impact, particularly on host communities whose infrastructure can barely carry the burden, Dr. Wazani stressed that – in some aspects - the Jordanian economy has also benefitted from the influx. He elaborated that the Syrians contributed with 2718.5 Million to the economy in 2013 particularly due to the revenues from sales taxes. Moreover, investments related to the Syrian crisis, by international or Syrian investors, created about 200.000 jobs for Jordanians.

However, Dr. Wazani concluded by stating that although there have been benefits from the influx of Syrian refugees accounting for 3118.7 million JOD in 2013 the revenues do not outweigh the burden for the Jordanian state amounting to 4665.6 million in 2013. While the international community is contributing a lot to improve the situation on the ground, funds have to be allocated in a more efficient way, especially in the north-ern governorates which are hosting the majority of the refugees.

The subsequent presentations elaborated on the situation in the host communities, particularly in the governorates Mafraq and Irbid.

The different speakers stressed the negative consequences of the continuous influx of refugees on the communities. It was mentioned that the increase of demand for oil, fuel, electricity, and water negatively affected the share of the Jordanian citizens by 20 percent. Moreover, the high number of school kids has a negative effect on the education quality. The average cost for rent in these governorates is supposed to have risen by 100 to 300 percent. An additional significant problem is the waste water and pollution which is not only a result of the significantly higher number of people in the governorates overstretching the infrastruc-ture and exacerbating structural problems, but is also related to an inefficient waste management system at the Zaatari camp which is located 10 kilometers east of Mafraq.

Speakers further elaborated on the security challenges due to the population increase leading to major tensions. While the security situation at Zaatari – the second biggest refugee camp in the world after a camp in Kenya - has been very severe at the beginning the circumstances highly improved. At the beginning of the crisis an encompassing security system inside the camp was almost absent and problems were mainly solved on the basis of tribal structures which ked to major tensions. Consequently, Jordanian security services connected the humanitarian and security aspect showing Syrians in the camps that they are not only guaranteeing security to avoid a destabilization of the country but that they are also protecting the refugees.

The security situation in the camps, however, differs significantly from the situation in the host communities. Tensions among the Jordanian population as well as between Jordanian and Syrian inhabitants are rising due to the negative implications of the refugee influx on the community infrastructure. Moreover, dissatisfaction of Jordanians with the inefficiency of processing funds by the municipalities and ministries spark further tensions. Additionally, a high number of Jordanians fear the influx of Jordanian and Syrian extremists into the Hashemite Kingdom as a result of the civil war.

Participants and speakers further criticized that international organizations are employing mainly international staff instead of Jordanians and that funds are mainly allocated to the administrative body of the respective organization.

The workshop has been a great success in outlining the existing socio-economic problems in Jordan related to the influx of refugees. The prepared study is crucial to address international players as well l as national actors by laying down the specific problems and will help to deal appropriately with the negative implications. 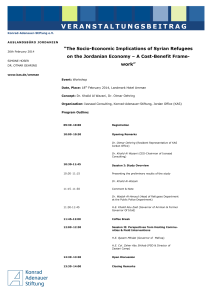