Switzerland was hit by a “green wave” more strongly than expected in the parliamentary elections of 20 October: both the Green Party and the Green Liberal Party achieved histori-cally good results. These came at the expense of Switzerland’s four largest traditional par-ties. The Christian Democrats (CVP) came out of the elections relatively unharmed. In the new parliament, the party will be granted a more pivotal role than has previously been the case.
October 21, 2019 Ordering Information 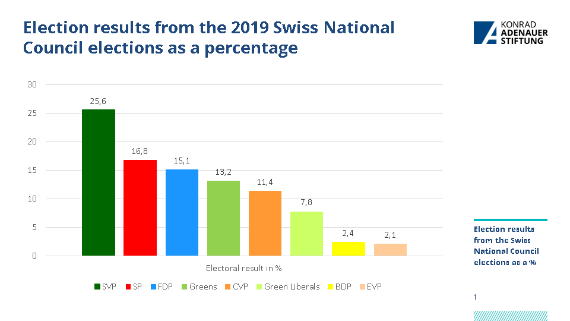 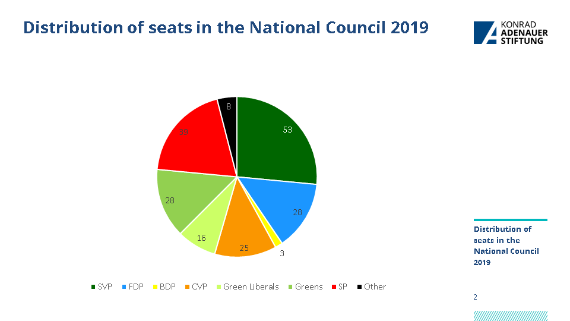 Distribution of seats in the National Council 2019 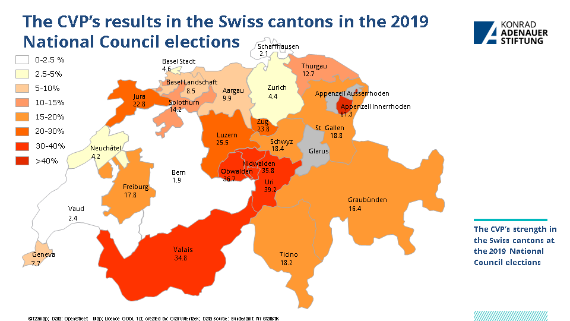 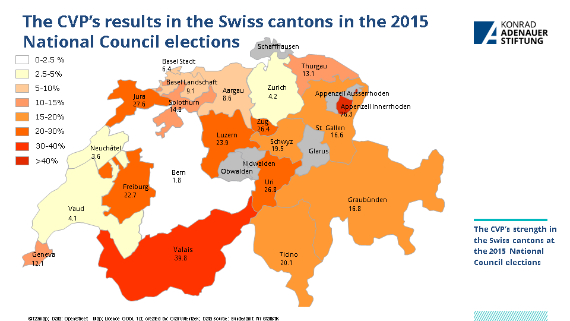 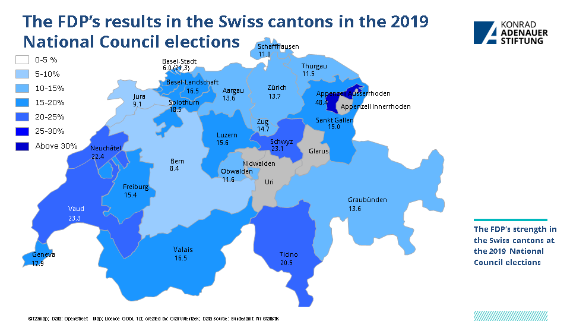 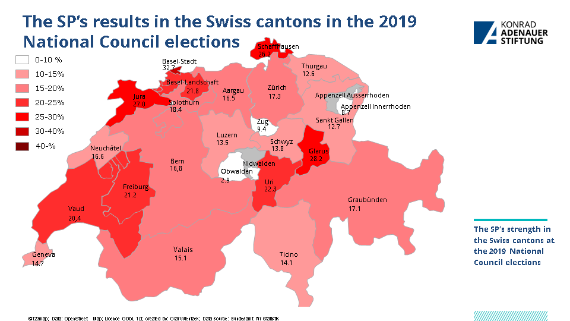 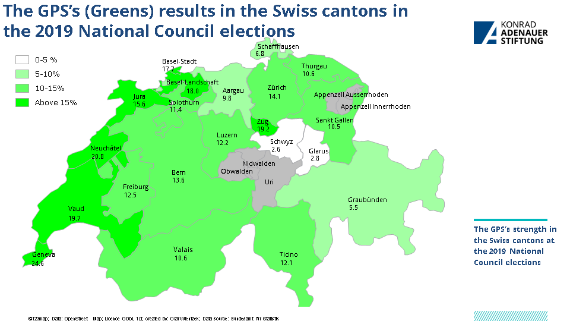 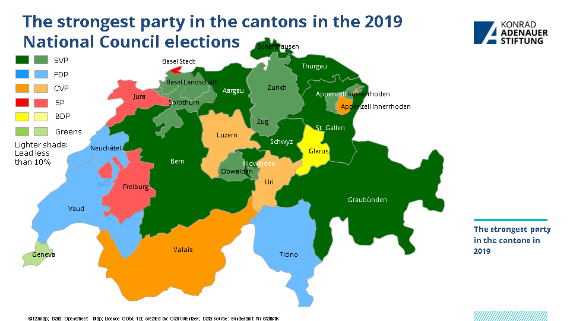 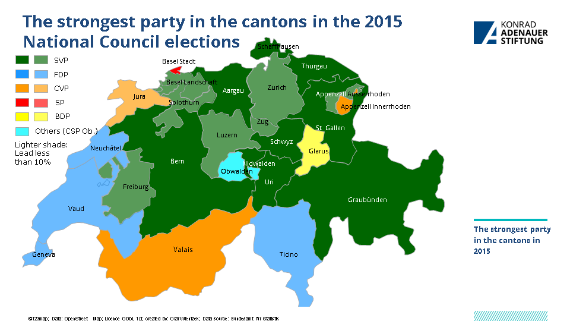 The results – parliament will become greener and more female

Compared with other European nations, Swiss parliamentary elections are not renowned for being particularly spectacular. Wins and losses normally remain within certain limits.[1] However, on this occasion, the elections to the Swiss National Council and the Swiss Council of States were to yield several unexpected results.

First surprise: The three largest parties all sustained losses, most of which were significant. The national conservative Swiss People’s Party (SVP) remain the strongest party with 25.6% of the vote. The result means that the party have been forced to contend with expected but nevertheless painful losses. They achieved their worst result since 1999, a share of the vote which has earned them 53 seats (-12) in Switzerland’s National Council. What were not expected, however, were the marked losses for the Social Democrats (SP), who, with 16.8% of the vote (-2%), achieved the worst result in their history and who have won 39 seats (-4) as a result. The centre-right Free Democratic Party (FDP) managed just 15.1% of the vote (-1.3%) and 28 seats (-4).

Second surprise:  The Green Party (GPS) almost doubled their support with a 13.1% share of the vote (+6.1%). This translates into 28 seats. Consequently, they have made an unprecedented leap forward (+17) and find themselves ahead of the Christian Democrats (CVP) in fourth spot. They achieved several spectacular results in the process, including their rise to become the strongest party in the canton of Geneva. The party that made the second largest gains at the election were the Green Liberal Party. Their share of the vote increased from 3.2% to 7.8%, a result which more than doubles their number of seats from 7 to 16.

Third surprise: While the CVP did lose two seats (from 27 to 25) and are now only the fifth largest party in the country, they were able to maintain their support base to a large extent with just a small decline from 11.6% to 11.4%, contrary to expectations. Hardly any observers had predicted this prior to the election. On the contrary, until shortly before the polls, several prognoses had suggested results under the psychologically important 10% mark.

Fourth surprise: Contrary to predictions, turnout fell to 45.1%, a figure which is nonetheless within typical bounds for Switzerland.

What was expected was the poor performance of the small centre-ground party, the BDP, who lost more than half of their seats (from 7 to 3).

The result for the 46-seat Council of States still cannot be predicted with certainty since one or even both of the seats in more than half of the cantons will only be determined in the second round of elections on 17 November. However, it could also be the case here that the Green Party manage to snatch several seats away from the established parties. By contrast, the Christian Democrats have a very good chance of remaining the largest party here and are already ahead of the FDP (7) with 8 seats. If the election goes particularly well, the CVP could even take an additional seat as compared with previous elections. The SVP and the SP should be prepared for losses.

[1] You can find a detailed analysis of the election system and party system here (KAS country report from 16 October 2019, German only):  Https://www.kas.de/web/multilateraler-dialog-genf/laenderberichte/detail/-/content/die-schweiz-vor-der-wahl

The clear winners in this election were the Green Party and the Liberal Green Party. This is probably due in the main to the heightened mobilization of their potential voter base as compared with several other parties (especially the SVP).

The losers here are the three largest parties, namely, the SVP, SP and FDP. While the SVP’s losses and, to a limited extent, those of the FDP too were expected, more seats were lost than had been planned for. Without doubt, the Social Democrats are a loser here having been unable to maintain either their support across the country or their number of seats, contrary to expectations. Evidently, neither their move to the left nor their increasingly skeptical stance vis-a-vis the EU has materialized into votes. Consequently, it is only partially correct to speak of a “slide to the left”: while the Swiss Green Party (in contrast to the Green Liberal Party) are clearly positioned on the left of the political spectrum, the Socialists are hemorrhaging votes at the same time. It seems, then, that voters are looking for greener but not necessarily more leftist policies. As a result, very high-profile union representatives from the SP were punished. As a result, an internal debate in the party on the future political course has already started. It is noteworthy that the two parties at the poles of Switzerland’s political system, the SVP and the SP, experienced the greatest losses.

The CVP’s result is harder to categorize. While fewer votes do not mean the party can be depicted as the “secret winner”[1] of the election, the party performed considerably better than had been predicted in various doomsday scenarios. Of Switzerland’s four traditional parties, the CVP is the only one which does not number among the losers in this election.

Overall, the election result is both sweet and sour for the CVP: they had to concede defeat to the Green Party for the first time with regard to both the number of votes polled and the number of seats in the National Council. It quickly became clear on the evening of the election that the Green Party would win the eagerly anticipated head-to-head race with the CVP. On the other hand, despite difficult attendant circumstances, they were still able to more or less halt the decline in their share of the vote at National Council elections that had continued almost uninterruptedly for four decades, even though it was ultimately not enough to achieve the projection of 12% which had been predicted during the course of the evening. That the party will maintain its position as the strongest party in the Council of States can also be labelled a success, even if it is less of a surprise.
Overall, the CVP can be satisfied with the result. In particular, the tactical electoral strategy pursued by party president Gerhard Pfister, as evinced in Aargau by the decision to compete with several lists, has clearly paid off.

The results for the party vary hugely depending on the region in question: while they have even been able to make significant electoral gains in several cantons in the German speaking part of Switzerland (Uri, Aargau, St. Gallen), they have been forced to endure losses in almost all of the French-speaking or bilingual cantons (Geneva, Vaud, Fribourg), some of which were severe.
Paradoxically, the electoral system has resulted in the party losing a seat in both St. Gallen and Zurich despite making gains there.

A future with several unknowns

With respect to the results, it would not be an exaggeration to speak of a historic election. At the same time, a number of fascinating questions still remain open after the election Sunday:

1. The issue of the environment and the climate will play an important role in the coming legislative period. Apart from the SVP, all of the parties have reconfirmed this. Nevertheless, fierce debate as to the appropriate instruments to tackle this issue can be expected. Both the CVP and the FDP will push for measures to protect the environment that do not only take the form of bans but also incentives and for the interests of the economy and the environment to be brought into harmony with one another.

2. How will the Green Party capitalise on their electoral success?
Having moved from operating in a comfortable position on the periphery, the Green Party will now have to prove themselves at the federal political level and translate their ideas into concrete policy. Before the evening of the election was out, the Greens’ chairwoman swiftly demanded that a national climate summit be held and that the CO2 law be sharpened. It could be tempting for the Green Party to try and make their mark primarily through exacting demands that will not command a majority. However, if the Green Party wish to implement their climate policy demands, they will have to obtain the support of the political middle-ground and the Swiss electorate. The SVP has already threatened to put the current CO2 law to the Swiss people in a referendum.

4. It also remains to be seen which majorities in the Council of States will dominate in future. The centre-right faction consisting of the SVP and the FDP lost ground in this election, even though the supposed SVP-FDP alliance was effectively hardly ever of relevance, in contrast to the horror scenarios depicted by the SP: despite losses in both the National Council and the Council of States, right-wing parties and parties from the political centre continue to hold a majority.

It is very likely that a key role will fall to the CVP since it will be impossible to build a “centre-ground” or a “centre-left” majority in the National Council without them, not to speak of their continuing dominant position in the Council of States. Consequently, the CVP will get the opportunity to make a greater impression on Swiss politics than they have done previously and to moderate demands from both of Switzerland’s political poles. It will be impossible to conduct politics without them, especially with regard to environmental and economic issues. With respect to social questions, by contrast, it is likely that a left-liberal alliance will repeatedly come into effect.

[1] The SVP, the FDP and the SP each have two seats on the Council while the CVP has one.

[2] Tagesanzeiger: The people do not want a green federal councillor, 21 October 2019: Https://www.tagesanzeiger.ch/schweiz/wahlen/volk-will-keinen-gruenen-bundesrat/story/10231483

Consequences for relations with the EU

Having played a somewhat secondary role during the election campaign, relations with the EU are likely to return as a key issue on the agenda once more.

Moderate pro-European parties emerge from this election strengthened overall, while the one clearly “anti-European party”, the SVP, has lost ground. However, after their unexpected election defeat, the Social Democrats may amend their thinking and end their relative hostility towards the framework agreement. In any case, most of the parties are now in favor of the framework agreement only with some reservations. Therefore, there probably will not be a substantial change to the current position in the first instance. There will likely only be real movement on the issue after the vote on the initiative regarding the free movement of persons in particular (referendum in spring 2020). Nevertheless, as a result of new majorities, some observers think at any rate that parliament may change tack when what is referred to as the “cohesion billion” is paid, a sum which benefits selected EU countries. 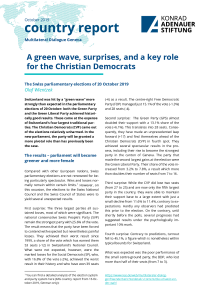