For over ten years the Konrad-Adenauer-Stiftung (KAS) Office has been supporting the decentralization reform of the Royal Government of Cambodia.
September 26, 2013 15:00-20:00 Clock

KAS developed several EU projects in order to implement local government structures at the municipal and provincial level. One of the most visible results was the piloting of the One Window Service Offices and the establishment of the District Ombudsman in Battambang and Siem Reap, which was later replicated to all provinces.

In 2010 KAS, the Ministry of Interior (MoI) and the Ministry of Information (MoIN) signed a Memorandum of Understanding on “IMPROVING OUTREACH, PUBLIC RELATION AND INFORMATION STRATEGIES ON SUB-NATIONAL LEVEL“. In the framework of this program KAS together with the two ministries provided four training courses for the newly established spokespersons and information officers of the Capital and the 23 provincial administrations. In addition KAS assisted both ministries in formulating a joint inter-ministerial declaration as well as a “Sample By Law” for all provinces in order to establish a team in charge of information consisting of one capital/provincial deputy governor (chief of the team), one capital/provincial official (member of the team), one Information Department Official (member of the team) and to clarify the roles and responsibilities of the team.

The highlight of this program for spokespersons and information officers was the “Competition for a transparent and citizen friendly Province”. The provincial administrations and the administration of the capital Phnom Penh were invited to document their information, press and public relation work and send it to the Konrad-Adenauer-Stiftung for evaluation. A five-member jury evaluated the documents.

The workshop organized by Konrad-Adenauer-Stiftung will present the jury results to the participating provinces and will announce the three winners of the competition by the evaluation committee through an award ceremony presided over by H.E. Sar Kheng, Minister of Interior. 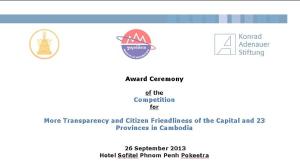