The support for the development of the legal system in Cambodia is one of the core components of the work of Konrad-Adenauer-Stiftung. The main aim of the law talks is to promote vital discussions between ex-perts, practitioners and scholars as well as different generations. Due to the legal vacuum that existed during and in the af-termath of the Khmer-Rouge regime, the cultivation of a legal discussion in the spirit of academic freedom and freedom of expression is of genuine importance as legal discourse remains underdeveloped.
August 14, 2014 Ordering Information

Talks were opened on August the 1st by Joachim Freiherr von Marschall, German ambassador and keynote speaker at the Conference. In a conjunctive speech he called for a redefinition of the concept of sovereignty because the rights of the sovereign so often conflict with the rights of the citizens’. International Criminal Prosecution, as embodied in the International Court itself and also in hybrid courts like the ECCC, contributes to this process of redefinition by holding governments accountable, restoring justice among victims and teaching leaders across the globe that there is “no action without consequence”.

Although he acknowledged the tremendous differences in German and Cambodian History the Ambassador also emphasized a common narrative of the two countries in this regard. Germany’s ambivalent development in international criminal law from being “the villain” to being an “active player” and its own painful process of reconciliation made it an active supporter and one of the largest donors of the ECCC in Cambodia. Sharing its own lessons learned and being convinced that the court “through its mere existence carries a message loud and clear” Germany would support the work of the ECCC, the first hybrid court ever established, because it can contribute to the development of national and international criminal law, foster public debate and restore justice in spite of the numerous obstacles it faces. The moral and pragmatic questions raised in his speech became point of reference throughout the conference.

Performance of the ICC and ECCC

The first thematic block concerned the history, purpose and establishment of both institutions with regards to the developments in of international criminal law.

Speakers such as Prof. Dr. Thomas Weigand, Professor for Criminal Law at the University of Cologne and Hisham Mousar legal expert at the Cambodian Human Rights and Development Association (ADHOC) elaborated on the ICCs Development affected by international war crimes and the role of the Nuremberg Trials in furnishing the normative basis of the idea of an international court. In addition, the shortcomings of the ICC, as it is constituted today, ranking from inactiveness to inefficiency and uncomprehensive prosecution decisions, were laid out and evaluated. Furthermore the progressive role of Cambodia in the ratification of International Law and at the same time its rather insufficient integration into Cambodian law, were discussed thoroughly.

Another group of speakers, comprised of representatives of legal NGOs and the ECCC itself, focused on Cambodia’s legal situation and the performance of the ECCC with regards to its impact on national as well as international jurisdictions and path-development regarding international criminal and human rights law.

They found that the legal situation in Cambodia, although still highly problematic with regards to securing Human Rights, might be “at a crossroads” if opportunities to challenge hierarchical structures are taken. One of these opportunities might actually be embodied in the structure of the ECCC. They criticized the ECCC for timeinefficiency, funding insecurities and political interferences. The pretrial as well as the trial phases are very long resulting in frustration among many victims and in-creasing costs for the voluntary donorcountries. As funding is neither the sole responsibility of Cambodia nor the UN, voluntary contributions of UN-Member states are an existential condition.

However, presenters also emphasized that procedural features, such as fair trial rights, legal reasoning, equality of arms and the like could provide a positive rolemodel for domestic courts and thereby strengthen their institutional independence and thus (re)distribution of power. Furthermore the representation of civil society, through civil-party-lawyers in court, mirrors an unknown degree of civil party participation and representation as compared to other courts. Yet to actually seize the opportunity of implementing and especially enforcing International Criminal Law in Cambodia a lot has to be done especially regarding implementation and enforcement.

Finally the rulings of the ECCC can contribute to an ever ongoing shaping and reshaping of definitions in international criminal and human rights jurisdiction. This should not be underestimated as international criminal law and human rights law in and by itself is far from being comprehensive and consistent. The timeliest exemplification hereof is the ruling in case 002/01. While Nuon Chea was held directly responsible for crimes against humanity Khieu Samphan was convicted on the basis of a version of Joint Criminal Enterprise (JCE), meaning that considering his rank in the Khmer Rouge Regime the judges based his conviction on the assumption that he must have been aware of the crimes committed. JCE is a controversial means in international criminal law. For Cambodia however its application meant justice.

Following this one-day evaluation of the ICC and the ECCC the focus of the Forum shifted towards the discussion of Human Rights mechanisms and their implications for Cambodia.

Dr. Daniel Heilmann, senior expert to the Cambodian senate, Jörg Menzel, and Dr. Lao Mong Hay independent analyst laid out the current situation in international, regional and national Human Rights law and law enforcement. As international human rights law in general is contested by its incorporation into domestic law, compliance with the norms of the Human Rights Declaration differs a lot across ASEAN but also within ASEAN countries across time. Dr. Lao Mong Hay, a well-known Cambodian thinker, strongly and emotionally criticized the human rights situation in Cambodia. Instead of action there would be only talking, he said, and while he had hoped that the ECCC would be able to transfer the principle of law into the Cambodian court systems, NGOs and the Government had failed to enforce this, as proven by evermore frequent human rights abuses in Cambodia. Heated discussions followed his emotional speech.

Shifting from a general to a more particular evaluation, a variety of international and Cambodian experts and scholars, among them some of the German and US American PhD students provided detailed insights into highly relevant up-to date human rights issues in Cambodia. Among those were problems faced by the Khmer Krom ethnic minority in the disputed Kampuchea Krom region in Vietnam, who are still frequently suppressed culturally and politically but also hardships that Vietnamese minorities face in Cambodia such as discrimination, or the inability to attend schools or obtain legal citizenship. Furthermore the protection of women and children and labor rights protection including migrant workers as well as human rights abuses of the social and cultural rights of indigenous communities which are seriously disadvantaged by difference in language, choice of livelihood and therefore access to legal resources were discussed. Perspectives were rounded by rather general considerations on the Protection of Minorities in International Criminal Law and considerations on developments in corporate criminal liability.

Finally, after two days of intense and vital discussion on an academically very high level Prof. Dr. Jörg Menzel closed the conference, thanking all the participants for their great interest and the commitment they brought into the Forum. 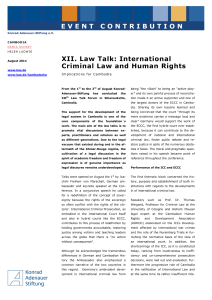