Written by Professor Bekim Baliqi and with a review by Professor Gëzim Selaci, this book offers an elaborate look at the concepts and processes of nation- and state-building. The book is available only in Albanian.
October 25, 2021 Ordering Information

The purpose of this book is to explore and elaborate nation-building and state-formation, as concepts, but also as processes, based on a historical and spatial context, as well as related to political, economic, military and social settings. Moreover, the book aims to contribute to the study of the nation and the state, based on different theoretical approaches and academic viewpoints since the nation and the state, both as phenomena and as concepts, are essential concepts in the study of political science. However, these notions cannot be studied without addressing the origin, content and the reasons for their existence. Therefore, this book looks more closely at the different factors and actors which influence and determine when and how nations and states were formed.

Although in some cases the process of state formation began much earlier, the overall trend occurred in the early 20th century. Whereas the academic debate and scientific interest in these subjects came even much later. The issues that continue to be widely discussed are related to the capacities and means of the states as the main provider of security, education, health and the welfare of the citizens. The national question remains a central concern in the political life of many societies, thus this demonstrates that the processes of nation and state formation are not merely historical developments or belong to the past. They are still among the most essential issues, in the national milieu or the world order and they represent an interdisciplinary subject of study without which many present-day phenomena and subjects cannot be properly understood.

The formation of the nation and the formation of the state are often used, or rather confused, as synonyms and to define the same notion, but they are basically different, as concepts and as processes. The first one involves a much broader and multidimensional process and concept, which implies, among others, the affiliation, loyalty and identification of the people as a political or cultural community with the state where they live. And the concept of state- formation generally defines the institutional, governmental and political aspects. Although state formation can be taken as the primary goal of each nation, i.e., creating its nation-state, in many cases, if not most, the formation of the state preceded nation-building, even if some exceptional cases might prove otherwise. These two phenomena are frequently the result of political and military actions and decisions, which are and remain the cause of wars and armed conflicts. In order to deepen these dimensions, this book addresses different approaches. On the one hand, the Modernism, Primordialism and Ethnosymbolism theories are well known on nationalism, and on the other hand, various theoretical approaches and many schools of thought on state-formation.

The book is divided into four sections with a total of twelve chapters, which include the main questions related to the phenomena and processes of the study. The first chapter, explores the concept of the nation. Starting from many definitions of the nation, to continue with the history and context of the development of various ideas, concepts and schools of thought about nations and nationalism. To continue in the next chapter, with the main theoretical approaches, based on their best-known representatives. Then, the question of identity, both national and state, will be discussed through the prism of their interaction and inter-relationships.

The second part elaborates on the notion of the state, exploring it from an ideological, sociological and historical point of view, and expanding further on its key dimensions, such as institutional, cultural and issues of legitimacy and the relationship of the state with society. The next chapter discusses state building, as a central attitude in the current global order, with numerous challenges and changes in this regard. The book deals with these cases with numerous case studies, historical situations and current developments by comparing these cases under various aspects and segments of the analysis.

In the third part of the book, attention is paid to Kosovo as a case study, both in terms of its state-building process and in terms of the contested issue of its identity. In addition to the institutional and political developments which led to the declaration of the independence of the State, the role of the international community has been elaborated. Furthermore, in the case of Kosovar identity, it focuses on discussions on the relationship between memory and identity formation, state symbols and the issue of citizenship.

The last chapter of the book discusses the current dynamics of the basic dimensions of the state and the nation, with local, regional and global perspectives. This raises the question: what can affect the future of states and nations, and how are they going to change our lives? With a reflective and critical summary, the last chapter serves as an invitation for open discussions and further studies on the topics covered in this book and this field of study, very little studied in the Albanian speaking areas. 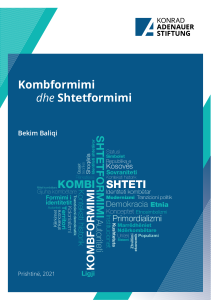