Migration crisis on the Belarusian-Latvian border - Foundation Office in Latvia

Migration crisis on the Belarusian-Latvian border

Newest developments on the Belarusian-Latvian border

On August 2, Agnė Bilotaitė, the Lithuanian Minister of Interior signed an order which allowed board guards to send back migrants to Belarus.[1] Following this, there was a rapid increase of migrants crossing the Latvian border from Belarus. In the four days, from August 7 until August 10, 218 illegal migrants had been detained at the border. As the border crisis deepened, on August 10 the Government of Latvia declared a state of emergency in the border municipalities. The state of emergency is in force until November 10.[2]
August 27, 2021 Ordering Information

The state of emergency

On August 18, German public broadcaster Deutsche Welle (DW) published a video report about the situation on the Belarus-Latvia border. This report features an interview with Rawa, a man from Iraq. He says that he alongside other families has been stuck between the borders of Latvia and Belarus for a week. It is also noted in the report that there are sick children stuck between the borders and that the migrants are not given any food. [4] The migrants arrive in Belarus with a tourist visa, hoping that they could enter the bordering EU member state, Latvia. However, given that the state of emergency has been declared, the migrants are not allowed to cross the border.

Guntis Pujāts, Head of the State Border Guard, has called the DW report exaggerated because no migrant group has stayed in the border zone for more than 3 days. Pujāts also mentioned that migrant groups are provided with medical check-ups, food and water deliveries. Furthermore, he said that the migrants shown in the DW video are on the Belarus side of the border, not in the neutral zone. The Latvian Ombudsman has also commented about the video, asking Latvian authorities to act on the situation if the migrant conditions shown in the video turn out to be true. Furthermore, the Ministry of Interior of Latvia has responded that the State Border Guard cooperates with NGOs to provide migrants with clothes and raincoats.[5]

The Minister of Interior of Latvia Marija Golubeva has voiced her critique of the DW report in a tweet: “Latvian Border Guards are providing the people whom Belarusian special forces are trying to push over the EU border with water and food, medicines and clothing as well as with medical examination. If there are any threats to their life or health, they are taken into hospital.”[6] Furthermore, the Minister of Defence Artis Pabriks has called the DW report biased “because you fail to say that Belarussian authorities are forcing these people to cross border against their will. It’s a hybrid war strategy executed by the Lukashenka regime against EU with the goal to activate public opinion in EU against EU. Be smart.”[7]

The general consensus is that Belarus is organizing the migrant flow to the Latvian, Lithuanian and Polish borders. A recent interview with an Iraqi family helps to understand how the migrants have become victims of Belarusian hybrid warfare. This Iraqi family came to Belarus on a tourist visa. On the second day in Belarus the family was told that they are going sightseeing. They were brought to the border with a bus, and later were forced through the woods to Latvia by a Belarusian man in a military uniform. These people were told to go back to Belarus by the Latvian State Border Guard. The mother from the family had health problems, so they were transported to a hospital. There Belarusian men in uniforms took their passports, so they could not go back to Iraq, the family said in the interview. The Belarusians forced them to cross the Latvian border, despite having health problems. The family was allowed to cross the Latvian border by the Latvian State Guard due to humane reasons.[8]

The European Union is supporting Latvia to control the situation at the Belarusian border. Experts from FRONTEX, the European Border and Coast Guard Agency are assisting the Latvian Border Guard. In addition to that, there has been considerable cooperation between the Baltic States and Poland in respect to the ongoing border crisis. On August 21, the Prime Ministers of the Baltic States and Poland held a meeting about the situation on the Belarus border, deciding to continue strengthening the border. The Prime Ministers issued a joint statement, where they condoned the actions by the Lukashenka regime: “the use of migrants in order to destabilise neighbouring countries is an obvious violation of international laws, and should be seen as a hybrid attack against Lithuania, Latvia and Poland, and, as such, against the entire European Union."[9]

On August 25 the European Court of Human Rights (ECHR) issued an indication for the Latvian and Polish authorities about the treatment of migrants on the border with Belarus. The Court ordered the Latvian authorities to provide the migrants with food, water, clothing, medical assistance, and temporary accommodation if possible. However, the Court’s decision does not mean that Latvia must allow the migrants to cross the border. The Latvian Ministry of Foreign Affairs responded by stating that Latvia is already providing food, water and medical support in accordance with humanitarian principles and will continue to do so, respecting the ECHR decision. Interior Minister Marija Golubeva has also responded that Latvia is already dealing with migrants in accordance with the ECHR statement.[10]

Actions by the government

Declaring a state of emergency is not the only action taken by the Latvian government to curb the flow of migrants. On August 19, Saeima (the parliament of Latvia) approved the government’s proposals to strengthen the Latvia-Belarus border. This would allow continuing to build the fence on the border with Belarus much quicker than before.[11] Over the weekend, on August 21 and 22 no persons tried to cross the Latvian border via Belarus illegally. While it is hard to make assumptions about the future, it can be said that the decisions by the Latvian government until now have decreased the number of illegal border crossings via Belarus.[12] 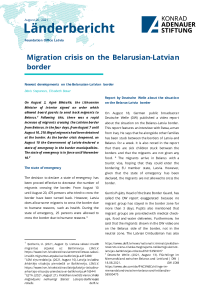