Clientelism as Link between Voters and Political Parties

The Lebanese Center for Policy Studies (LCPS) and Konrad Adenauer Stiftung have the pleasure to invite you to a conference titled: "Clientelism as Link between Voters and Political Parties" on December 19, 2014 at the Monroe Hotel, Beirut.
December 19, 2014 09.00 - 14.00 Clock

Even though parliamentary elections have been postponed, most if not all of the public’s focus seems to be confined to the electoral law to be adopted. However, very little debate is taking place concerning electoral behavior and the relationship between voters and political parties, which are key aspects of political reform.

Unlike democracies in the West, Lebanese political parties do not compete over political programs or agendas. They frequently resort to clientelistic relationships, which are often asymmetric and dyadic, where parties and politicians provide private goods to voters in return for their political loyalty in elections.

The event builds on a study on the Role of the Political Brokers (al-mafateeh al-intikhabiyyeh) in Lebanon, supported by KAS since 2012.

Clientelism as the Link between Voters and Political Parties
May 4, 2015
read now
Contact 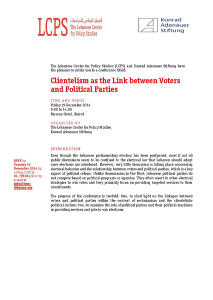