by Linas Kojala, Elisabeth Bauer
Lithuania marks the Freedom Defenders’ Day on January 13th to commemorate the 14 victims that lost their lives during Soviet aggression exactly thirty years ago in Vilnius. The tragic events were of international significance as they marked the coming end of the Soviet Union. To this day, the memory of the bloodshed also reveals the stark divides between the Baltic States and Russia.
January 13, 2021 Ordering Information

January 13th was a part of Lithuania’s long path towards freedom and independence. In 1918, the Act of Independence of Lithuania was signed by the Council of Lithuania. However, the first republic did not survive long. Just over two decades later, at the height of the Second World War, Lithuania, under the auspices of the 1939 Molotov-Ribbentrop Pact, was occupied first by the Soviet Union (1940-1941), then was taken over by the Nazi Germany (1941-1944), and then again occupied by the returning soviets. While the war soon ended in Europe, the soviet military never left the Baltic states.

The occupation of Lithuania, Latvia and Estonia lasted almost half a century. Majority of Western countries, including West Germany, maintained de jure non-recognition of the Baltic annexation into the Soviet Union. For instance, the Baltic passports had been recognized in West Germany[1].  Military resistance by partisan soldiers (the Forest Brothers), comprised of around 50.000 people, continued up until 1956 in Lithuania, Latvia Estonia. There was also a strong underground dissident movement that maintained the hope of freedom throughout the Cold War (for instance, the Chronicle of the Catholic Church in Lithuania was the longest-running and best-known samizdat periodical that focused on repressions against Catholics in Lithuania and other violations of human rights in the Soviet Union). Finally, on March 11th, 1990, Lithuania proclaimed re-establishment of independence – the first country in the Soviet Union to do so – and managed to sustain it ever since.

Yet the task of safeguarding the re-established statehood in 1990-1991 was not an easy one. Moscow imposed economic blockade in 1990, with fuel and food being in short supply; moreover, the Soviet troops remained stationed in Lithuania even after the declaration of independence (the last soldiers left Lithuania only in 1993); finally, the Soviet leaders insisted that the Act of independence was illegal. Therefore, it was up to the people of the country to show yet again the desire to be free from the soviet influence.

The tragedy in January

Dramatic events unfolded in early 1991. In January, the soviet troops left their bases in Lithuania and moved to occupy the Radio and Television building, the TV tower, as well as the parliament in Vilnius. The occupational forces sought to re-establish political control, but faced crowds of thousands of bare-handed people, who gathered on the streets to defend the newly re-established Lithuanian political and other institutions.

As the New York Times reported that day, “<…> a sound truck within the advancing artillery column blared the decree: “The Lithuanian National Salvation Committee announces that all power in the republic has fallen into the hands of our committee!” 'It Will Not Be Long'. The committee, a new arm of the Lithuanian Communist Party created to retake power from the 10-month-old Lithuanian independence government, had said through a tense Saturday standoff that it expected to take control and strongly hinted that it was closely aligned with the armed forces of President Gorbachev.”[2]

Brutal force was used; soviet military fired blank rounds around the TV tower and inflicted shrapnel and other injuries; yet the people did not disperse. The tanks then drove into the civilian crowd, injuring and crushing people around, while others were shot near the Radio and Television Committee building. By the time the night was over, 14 people were killed. However, the aggressors failed as the people managed to protect the parliament building; military did not dare to storm the building surrounded by a large crowd and concrete barricades.

Vytautas Landsbergis, Chairman of the Supreme Council of Lithuania, was the first head of state of independent Lithuania. He had to lead the country through the difficult time, seeking to defend freedom, yet also avoid the bloodbath. “We needed witnesses, not casualties”, said one of the defenders of the parliament.

Landsbergis recalled the January events by emphasizing that it was a confrontation of two different worlds. “One of them comprised the tens of thousands of Lithuanian citizens who had gathered that evening. They had not known one another beforehand, but they stood together, united by love, facing another world. That other world was made up of foreign soldiers, standing sullen in serried rows, looking down in cold hatred, their eyes filled with contempt. <…> The only thing that was evident was their blind obedience <…>”.[3]

Lithuania’s annual commemoration to honour those who died or were injured during the January events has always been both poignant and celebratory. On the one hand, the tragedy touched the lives of thousands of people; it also revealed the vulnerability of Lithuania’s independence – nobody could have been sure that the freedom is to be maintained. Candles are still being lit across Lithuania and by the Lithuanian communities abroad on January 13th as symbol of the memory.

On the other hand, as the years go by, the January 13th is also recognized as a victorious day. People in Lithuania and the other Baltic states proved they have what it takes to protect the re-established statehood. Furthermore, blatant force by the soviets which was widely reported across the world by foreign correspondents destroyed any remaining arguments by the soviet leaders. It was clear that the soviet presence was not welcome, and, contrary to the statements by the leaders in Moscow, the independence was not supported only by a minority of Lithuanian “radicals”.

To this day, the memory of the January 13 events remains a deep point of friction in the relationship between Lithuania and Russia. The of the Soviet Union at that time Mikhail Gorbachev denies his personal responsibility for the force used. In response to the DW, he said that “as president of the USSR, my only position was to use all political means to preserve the unity of the country. I stress — only political means. We were ready for talks. It would have been enough for the Lithuanian leadership to suspend its independence declaration. Compromise was possible, but it was rejected.”[4]

The Kremlin does not recognize the responsibility of the Soviet Union leaders for the bloodshed as well. Russia refused to hand summons to Gorbachev for testimony in the January 13 trial in Lithuania. In spite of this, in March 2019, Lithuania sentenced 67 Russian, Belarusian and Ukrainian citizens for war crimes and crimes against humanity committed that night. Dmitry Yazov, 94, the former Soviet defence minister, was sentenced to ten years in prison in absentia.[5]

In response, Russia opened a criminal case against Lithuanian prosecutors and judges that handed down the ruling. The Investigative Committee of Russia stated that Lithuanian judges “were aware that the events in Vilnius, for which the citizens of the Russian Federation were accused, took place during the period when the Lithuanian Soviet Socialist Republic was not an independent state and was part of the Soviet Union” and that the servicemen of the Soviet Union in January 1991 “performed their official duty and acted in accordance with the legislation of the Soviet Union in order to ensure the public order”.[6]

The January events are also surrounded by disinformation campaigns. For example, Russian news presenter Dmitry Kiselyov, known for his anti-Western views, still argues that the people in Vilnius were killed not by the soviet military, but by the unrecognized shooters from the rooftops.[7] Similar claims were made by the former leader of Lithuania’s Socialist People’s Front Algirdas Paleckis, who said that “our own people were shooting at our own people.”[8] Paleckis is currently charged for spying for Russia as part of an organised group.[9]

For the people of Lithuania, January 13th will always remain as one of the most important days in modern history. While tragic, it was also a triumph of peaceful and non-violent defenders of freedom against the military of a repressive regime. It is also a day of global significance, as it again revealed the nature of the Soviet Union and brought closer its collapse.  As historian Alfred Erich Senn argues, it was Lithuania, above all, that demonstrated to the world the empire’s bankruptcy.[10] Only eleven months later, the Soviet Union collapsed.

[3] The Keynote Speech of Pres. Vytautas Landsbergis, MEP, at the first Lithuanian Prayer Breakfast in London, held at the Hyatt Regency Churchill Hotel on January 12, 2008

[9] Former politician accused of spying for Russia to be released on bail. LRT, April 7, 2020 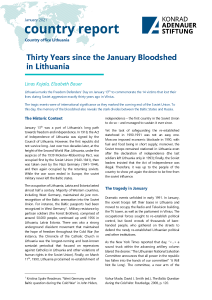