Religious, Moral and Ethical Values of the Youth

The Konrad Adenauer Foundation in cooperation with the Institute for Political Research - Skopje and the Internet portal "Religija.mk" are continuing the project to monitor citizens' perception of religion and its role in multicultural societies.
October 16, 2019 Ordering Information

This latest research you have infront of you is a specialized approach and aims to reflect the youth's perception of religion and its role in multicultural societies. It covers only the young population of the country.

In a society where a high percentage of the population declares themselves religious, it is extremely important to know the tendency of such a religiosity, in which direction it is directed, in terms of prevention of conflicts. Is that religiousness the basis for building stereotypes and prejudices through its politicization, or is it aimed at genuine religious values ​​of mutual respect and tolerance. It is especially important to have a clear picture of such religiosity among young people, as they are the most dynamic and energetic part of the population, which can easily be subject to political manipulation.

The aim was to get a picture through a series of questions about how young people percieves religion, its values,their role in social processes, their views on certain issues in the domain of religious teachings, and of course to examine the percentage of young people for whom religion plays a role in daily life. 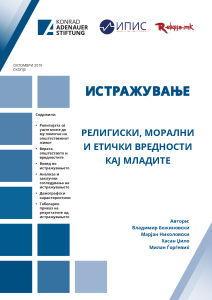