Is there a Chinese strategy for the Western Balkans?

PR China is the latest stakeholder striving to exert influence on the Western Balkans (WB). Unlike Russia and Turkey who have been present in the WB for centuries and have already developed their strategies, based on vested interests and traditional alliances, China's objectives and actions remain relatively vague. The paper at hand aims to shed light on the Chinese agenda for the region, focusing particularly on North Macedonia, however drawing comparisons to other states when relevant in order to identify emerging patterns. Given the lack of goals and objectives explicitly defined by the Chinese side, the determination of patterns would be crucial in order to find out whether there is a purposeful strategy behind the Chinese presence in the WB, and if that is the case, what the strategy consists of and what it implies for North Macedonia. Finding an answer to these questions is necessary for devising an appropriate "China policy" which would help the authorities maximise national interests and avoid potential pitfalls. While this paper does not provide a comprehensive account of all the interactions between Macedonian and Chinese stakeholders, it refers to the most pertinent and illustrative examples, especially concerning economic cooperation, the area in which China has the biggest clout in the region.
In the first section of the paper, Chinese presence in North Macedonia will be examined, with a focus on the distinction between public contracts and involvement by stakeholders directly supported by the Chinese government (e.g. state owned enterprises and banks, the Confucius Institute), and private capital flows. In the second section, Macedonian participation in the Chinese-led Belt and Road Initiative and the 17+1 cooperation with Central and Eastern Europe will be analysed. The third section is concerned with the Sino-Macedonian relations through the lens of the EU integration process. At the end, conclusions will be drawn and policy recommendations provided. 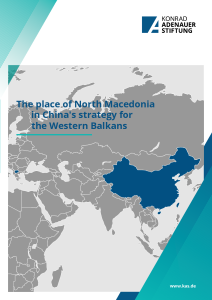