Shaping the future of the European Union

The simulation game aims on bringing the participants closer to the EU institutions and the EU foreign policy and to give them the opportunity to get to know their neighbours and exchange experiences.
September 29 - Oct 02, 2011 all day Clock

In order to have experiences from the EU countries and countries that are aiming towards the EU the participants will be from all the South Eastern region including Bulgaria and Romania as the youngest EU members.

The role play “Shaping the Future of Europe” deals with the formal process of the accession negotiations between the candidate countries, the current EU member states and the EU institutions. The aim is to make clear both the institutional design of the EU with its specific decision making processes and the different interests and positions in the ambitious project of the EU enlargement.

In contrast to traditional role-playing games, the participants act primarily in groups. They have to learn to understand the socio-cultural background of the country they represent, make demands, represent parties, participate in discussions, build coalitions and much more.

Target Group of the Activity:

Arrival of the participants

Representative from the EU Delegation

Introduction to the scenario-building method

Start of the simulation

14.00 – 14.30Speech of the President of the European Commission followed by informal talks of the actors

14.30 – 16.00 First round table of the Council of Ministers and the European Parliament, clarification of positions

17.00 – 19.00Presentation of the accession applications by the candidate countries to the EU-Commission, the Council of Ministers and the European Parliament

09.00 – 10.30Presentation of the accession applications by the candidate countries to the EU-Commission, the Council of Ministers and the European Parliament

Interviews and reports prepared by the representatives of the media

11.45 – 13.00Negotiations of the Council of Ministers and the European Parliament

14.00 – 16.00 Negotiations with the Candidate Countries in close co-operation with the European Parliament

17.00 – 18.30 Negotiations with the Candidate Countries in close co-operation with the European Parliament

10.00 – 10.30Vote on the negotiated Accession treaties by the Council of Ministers (unanimously)

Speeches by representatives of the EU-Commission, the presidency of the Council, the EP and the candidate countries

End of the simulation

11.00 – 11.30Evaluation of and reflection on the results of the simulation

End of the seminar and departure of guests 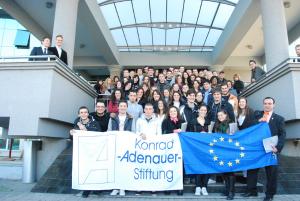 Young participants of the simulation training on the European Union