The Konrad Adenauer Foundation and LEAD are organizing a series of webinars for capacity building of the high school teachers.

The situation with Micro, Small and Medium Enterprises in times of Health crisis and their upcoming Challenges

I. Regional Political Women Academy – Women from the KAS Partner Parties from the Region together for Equal Representation in Politics

with participation of Ms Doris Pack, President of EPP Women

The Konrad-Adenauer-Stiftung (KAS) in cooperation with the Women Union of VMRO-DPMNE is organizing the I. Regional Political Women Academy – Women from the KAS Partner Parties from the Region together for Equal Representation in Politics.

This year Political Academy for party members is designed as a combination of civic and political education. Its main purpose is to strengthen the knowledge and roles of party members with a clear vision for the progress of the country based on the main values of freedom, justice, solidarity and subsidiarity. The Academy will bring together members of VMRO-DPMNE who strive for a democratic, transparent and efficient party policy that is close to its citizens and that wants to see the country as a member of the European family through the promotion of an efficient policy.

This year Political Academy for party members is designed as a combination of civic and political education as well as training for social media and political communication. Its main purpose is to strengthen the knowledge and roles of party members with a clear vision for the progress of the country based on the main values of freedom, justice, solidarity and subsidiarity. The Academy will bring together members of the Youth Forces Union of VMRO-DPMNE who strive for a democratic, transparent and efficient party policy that is close to its citizens and that wants to see the country as a member of the European family through the promotion of an efficient policy.

As part of our activities to straighten the Macedonian parliamentary democracy and the pluralism, the KAS is organizing a one-day workshop for the women MPs of the VMRO-DPMNE parliamentary group. The initiative aims to support women parliamentarians in their efforts to undertake more active role in the executive governance and to introduce gender equality and women rights policies in the parliament.

Konrad-Adenauer-Stiftung in cooperation with the Association of Journalists of Macedonia (AJM) are organizing workshop titled “Professionalism in Online Media - Challenges, Opportunities and Practices” which will be held in Ohrid. Very important factor in the self-regulation system is the media to respect the ethical standards during their work. In this direction, the best ethical practices will be presented to participants during the workshop and through a debate the best and final criteria for selecting online media that can join the Register of professional online media will be identified. This register will be created by the AJM, the Council of Media Ethics and the Chamber of Commerce. The selected trainers for the workshop are very experienced on these topics and their knowledge in ethical reporting and media self-regulation as well as legal aspects in which media operate can help online media to improve their knowledge how to work better in this legal framework. Taking this into consideration the final goal of this workshop is to have even more professional media, to make a clear difference between professional and unprofessional media, and finally to have a better informed public. Having this in mind, the whole process should help to regain the trust of the public in the media.

"Enlargement Prospects after the European Council? Role of the Assembly in the EU Accession Process of North Macedonia and Relations with the European Parliament"

Considering the lack of expertise, which North Macedonia lacks in regards to the Accession Negotiations, it is of key importance that the country utilizes regional expertise. In this context country which has successfully finalized this process in more recent history is Bulgaria. Keeping in mind the new positive dynamic of the bilateral relationship between the two countries Bulgarian experts could be used to spur the process of EU integration by providing significant know-how and knowledge. The aim of this event is to open a table of dialogue which includes academia, experts, politicians, journalists and representatives of NGO’s aiming to boost North Macedonia’s capacity for negotiation once the process initiates.

HYBRID THREATS AND THEIR IMPACT ON DEMOCRACY – POSSIBILITIES FOR REGIONAL COOPERATION

In cooperation with the Wilfried Martens Centre for European Studies from Brussels (WMCES) The Konrad-Adenauer-Stiftung together with the Faculty of Security-Skopje and the Center for Research and Policy Making organizes the Regional School Security 2019. The initiative involves students and professors from the Faculty of Security-Skopje, the Macedonia University from Thessaloniki and the Ss. Clement Ohridski University-Sofia. By tackling topics which are of common interest, the project aims to straighten cooperation and exchange between countries of the region, especially between youngsters, future experts and stakeholders. At the same time, the cooperation and exchange between the universities from North Macedonia, Bulgaria and Greece will serve as a positive example to politics and should positively reflect the bilateral and multilateral relations between the countries in the region. 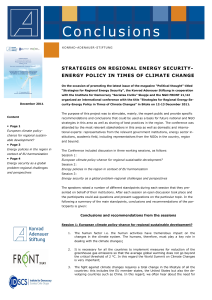 On the occasion of promoting the latest issue of the magazine “Political thought” titled “Strategies for Regional Energy Security”, the Konrad Adenauer Stiftung in cooperation with the Institute for Democracy “Societas Civilis” Skopje and the NGO FRONT 21/42 organized an international conference with the title “Strategies for Regional Energy Se-curity-Energy Policy in Times of Climate Changes” in Bitola on 12-13 December 2011. In the following a summary of the main standpoints, conclusions and recommendations of the participants is given.

On 17 March 2011 in Skopje the Konrad Adenauer Foundation and the Institute for Democracy “Societas Civilis” held the first training for journalists on the topic “News reporting on religious issues”. The training was organized within the project “Tolerance, dialogue, cooperation! Promoting inter-religious dialogue in Macedonia through capacity building for media and religious representatives”, funded by the European Union and co-funded by the Konrad Adenauer Stiftung.

„Today, Europe’s 500 million citizens have the foundation on which to build a better Europe in the future,” said Herman Van Rompuy, President of the European Council in the first „State of Europe“ address. Van Rompuy used this address to promote a confident and strong Europe in front of an audience of 800 citizens at the historic Pergamon Museum in Berlin.

20 years after the fall of the Berlin Wall: lessons for the Balkans

50 students from two countries, 5 universities and 6 nationalities came together on 14 November in FON-University Skopje to discuss on how to overcome today's walls.

Political Parties and their responsibility for Europe – Germany and Macedonia

On the occasion of the visit of the members of the German Bundestag Kolbow (SPD) & Lämmel (CDU), the KAS organised together with the Friedrich Ebert Foundation a high-level panel-discussion.Germany & Macedonia nurse close economic, cultural & political relations. The visit of two German MPs confirms the interest of the political parties in Germany for further improvement of bilateral relations & fostering a political dialogue between the two countries, but also among the political parties. This is a prerequisite for building an open democratic culture & movinbg closer to European values.

Identifying common Balkan concerns in an era of global crisis

Despite the political deadlock on the name row between Macedonia and Greece, students & professors from both countries joined together with their colleagues from several Universities in Macedonia to work & exchange views on common Balkan concerns - from political difficulties to the economic crisis. The 20th anniversary years of the fall of the Berlin wall served as a perfect example for what lessons the leaders of both countries should keep in mind, as the European idea continues to evolve: mutual respect & open minds, as Vice-Primeminister Bocevski declared at the start of the event.

At the panel-discussion achievements and challenges in the foreign policy of the decision-makers in Germany, Macedonia and USA during the past two decades and after the end of the Cold War were analysed. Additionally, the experts present discussed current policy issues in the context of global security threats and EU- and NATO-expansion. The current Deputy Minister for Foreign Affairs of Macedonia, previous Foreign Ministers, ambassadors and experts from Macedonia and abroad were invited to exchange experiences and present their views on the topic.

“Market economies under pressure – Is there light at the end of the tunnel?”

“Trust” and “dialogue” are the key terms that the religious communities in the Balkans have to build on in order to strengthen their role in society. All efforts have to be made in order to build trust through dialogue among the religious communities, but also between the religious institutions and the state and society. This was the outcome of a two-day event organized by the KAS on 18-19 September in Skopje, which was attended by the Heads of the Orthodox, Islamic, Catholic, Evangelical-Methodist and the representative of the Jewish religious communities in Macedonia and representatives of the Catholic and Islamic religious communities and the new Head of the Inter-Religious Institute in Bosnia-Hercegovina, as well as by Baba Edmond Brahimaj of the Headquarters of the Bektashian community and Bishop Homeyer of Hildesheim. It was the first of its kind in such a high-ranking and international format, which led to a lively and constructive exchange of experiences in inter-religious dialogue in Macedonia, Albania, Bosnia-Hercegovina and Germany, and a sharing of “lessons learnt”. At the end of the discussion it was noted that inter-religious dialogue in the Balkans has made significant progress and can pose as a model for the communication between different religious communities in other European countries as well.