Konrad Adenauer Foundation in cooperation with the Institute for Democracy Societas Civilis from Skopje promoted the research “Analysis of the public opinion about the Macedonian process of accession to the European Union 2014 – 2017” by the author Ivan Damjanovski;
March 27, 2018 Ordering Information

The support of the citizens for membership in the European Union remains strong in Macedonia despite the steady trend of slight decline over the years. Nearly three quarters of respondents (73%) in November 2017 said that they support the country’s membership in the Union, which is 4 percentage points less compared to 2016.

The high support for EU membership is due to three factors. The strongest is the expectation for improving the economic situation after the eventual entry into the Union. Other factors affecting the citizens’ mood for the process are the name dispute with Greece, as well as the relations of the political parties with the EU, which are also reflected in some of their sympathizers perceptions towards the Union. Also, there is an increase in the percentage of citizens who oppose joining the Union regardless of the dispute with Greece. 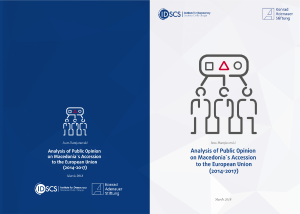