The European Union sixty years after the Treaty of Rome: Is Macedonia on the right way?

On the occasion of the 60th anniversary of the Treaty of Rome, the European Movement of Macedonia in cooperation with the Konrad Adenauer Foundation organized the Panel discussion posing the question: Is Macedonia on the right road?
April 3, 2017 Ordering Information

The Panel discussion was held in the Ceremonial hall of Faculty of Philosophy on the 31st of March. Prominent guest speakers were invited to share their point of view and send a message to the Macedonian public i.e. the head of EU delegation in Macedonia, Mr. Samuel Zbogar and the Resident representative of KAS in Macedonia, Mr. Johannes Rey.

During the panel Mr. Zbogar stressed the European perspective of the Western Balkan countries while at the same time he raised his concerns about the recent political situation in Macedonia therefore urging for a new government formation.

On the other hand Mr. Rey expressed his irritations of the inability of Macedonian political elites to solve their own problems. At the same time Mr. Rey posed the question whether Europe is on the right path as well?

This event is part of the traditional celebrations of the 9th of May (Europe Day). 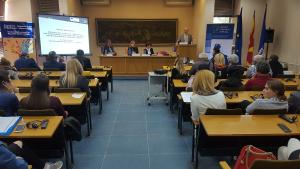