Konrad-Adenauer-Foundation in cooperation with the European Movement of Macedonia celebrated Europe Day with a series of events.
May 18, 2017 Ordering Information 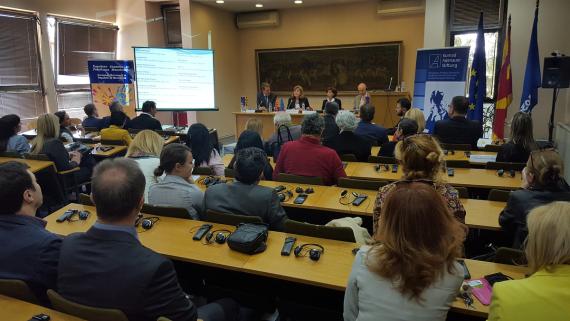 On the 31st of March at the Faculty of Philosophy panel discussion was organized on the topic “Is Macedonia on the right way? where the head of the EU delegation in Macedonia, Mr. Samuel Zbogar among others held a keynote address.

On the 5th of May at the Faculty of Philosophy a student debate was organized with students from the biggest universities in the country on the topic “European Union: Mandatory or alternative option for the students?” followed by an oratory competition on the topic “Do we know enough about the EU?”.

The celebration of Europe Day finished on 11th of May with the endowing of the European contribution of the year (2016) award which the European Movement traditionally gives since 2003 to persons and organizations which throughout their work contributed toward the European values. This year the award was given to the Red Cross of the Republic of Macedonia