Macedonia and Germany have close and deep cooperation and share excellent business relations, which is a stable foundation for the future it was concluded by the participants on the II Macedonian German Forum "Building Bridges-Politics and Economy".The forum was organized by the Konrad Adenauer Foundation and the Institute for society research MK-91, marking the 25th anniversary of bilateral relations between the countries.
October 9, 2018 Ordering Information 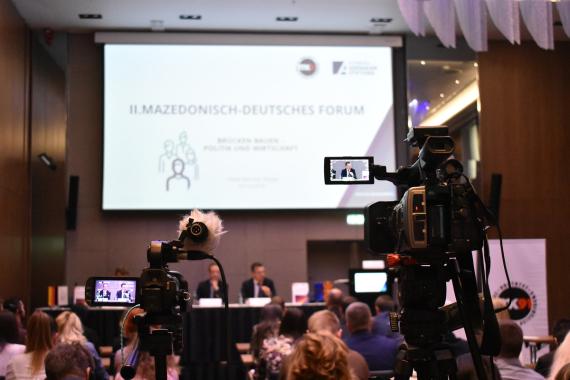 Welcoming address on the event was given by Johannes D.Rey, the official representative of the Foundation. According to him a functional political system and functional institutions would prevent the waves of brain drain.

In addition, the participants were addressed by the German Ambassador in Macedonia, Thomas Gerberich and MP in the German Bundestag, Thorsten Frei. According to Frei, it is important that Macedonia pursues the path to EU and NATO integration stressing that persepective for the people in the country must be opened, especially for young people.

Nearly 200 German companies operate in Macedonia and employ close to 20000 people.Last year trade exchange between the countries stode at 3,15 billion EUR. Germany is one the key trading partners of Macedonia. Around 20 percent of Macedonia's overall export goes to Germany and almost 15 percent of all goods imported are from German origin.